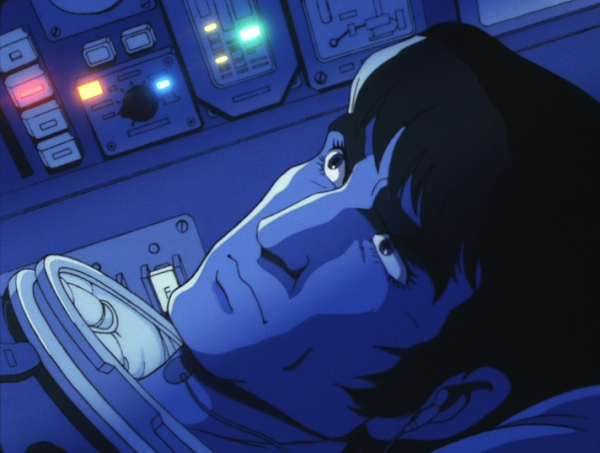 Man. In keeping with my assessment of Kawajiri Yoshiaki’s output as being all over the place between sublime (Cyber City Oedo 808) and god-awful (Midnight Eye Gokû)… I gotta say, Phœnix: Space Chapter is the Phœnix chapter I was most looking forward to watching, in part because it is thematically the closest to the æsthetic of this blog. It’s also the Phœnix chapter I was most disappointed with. There’s a good story in here somewhere to be told, but it changes tone and direction so often amidst a plethora of flashbacks and retellings of events from different perspectives that it kind of gets lost. That’s not to say I don’t think this kind of story can be told well, and it’s clear what Kawajiri was going for. But it doesn’t really succeed in becoming such a Rashomôn or a Memento.

A spacecraft in deep space collides with an asteroid and the crew is awakened only to find that one of their number – Makimura – has died from the failure of his cryopod. He has left a message saying that he is about to be murdered. The other crewmembers get into escape pods and launch off. The relationships between the other crewmembers and Makimura are brought to light, revealing a love triangle between Makimura, Nana (the female crewmember) and Kizaki (her boyfriend, from whom she had grown distant). But then it is revealed that Makimura’s pod is following them, as they are pulled into the gravity well of an unknown planet. In the meanwhile, the crewmembers begin to discover that Makimura was hiding more than one secret, and that he may not be as dead as they all think. His fate appears to be tied up with the Phœnix. 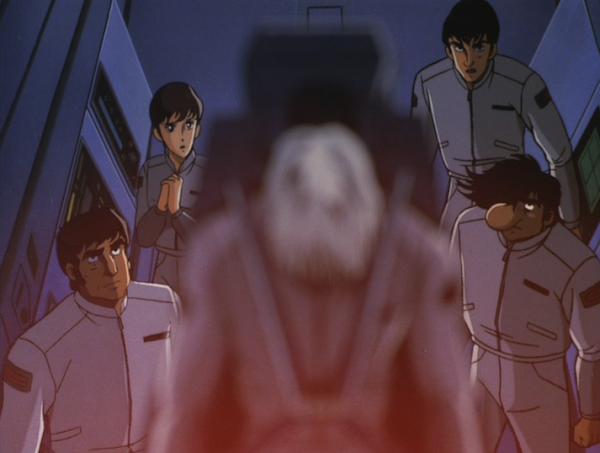 First, to start off with: as with everything else that Kawajiri Yoshiaki seems to have put his directorial hand to, Phœnix: Space Chapter is impeccably stylish. The animation is high quality. Set design is enhanced amazingly with the palette choices that Yoshiaki used, with ominous dark tones and warm reds reminiscent of blood providing the stark atmospherics of space as opposed to the electric blues which dominate the spacecraft (and the Phœnix herself, interestingly enough) and the bright yellows and oranges that characterise the exile planet. The drawing style and character designs are unmistakeably Tezuka – particularly Salta – but the use of light and shadow to establish mood are pure Kawajiri. It’s also an interesting choice to make much of the story play out in separate escape pods, with the characters not being able to see each other or interact face-to-face. It underscores Kawajiri’s interest in highlighting the psychologically-distorting effects of too-close and too-sustained contact with technology, going back to ‘The Running Man’.

One of the other things that Kawajiri likes to toy around with conceptually, is the temptation to use technology to sustain life unnaturally, and the effects that this can have. We can see this in Oedo (particularly the last chapter), a little bit in Demon City Shinjuku and especially in the second half of Midnight Eye Gokû (however poorly that’s handled). But this is the first instance, at least chronologically, that we see of this theme. Here, it’s portrayed explicitly as a curse: the Phœnix bestowing a kind of Benjamin Button-style immortality on Makimura and punishing him with an eternity of exile for having committed a particularly heinous crime on another world. Makimura’s use of technology to handle the inconvenient aspects of his immortality creates an interesting precedent for Kawajiri Yoshiaki’s future work. 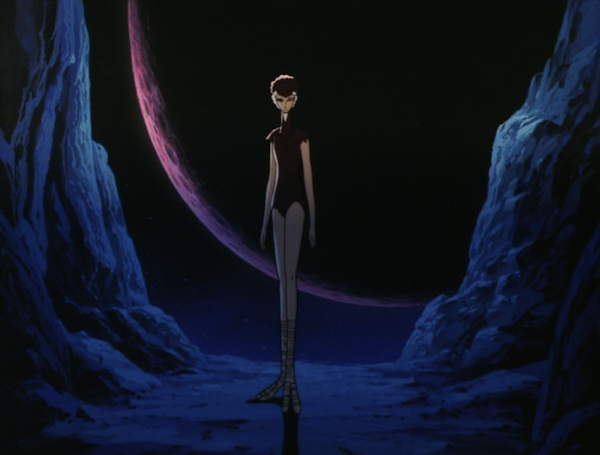 SPOILER WARNING: Honestly, though, the whole thing kind of hits the skids when they reach the exile-planet and the Phœnix dumps a boatload of exposition on us. Makimura isn’t just an ageless immortal – he’s a planetary genocidaire who murdered the entire aviform-sentient population of Flemil and was punished by the Phœnix with immortality for his crimes. Salta, appalled by the story, resolves to rescue Nana and leave Makimura to his fate, but Nana refuses to leave the planet. The planet, we learn, is home to only one kind of life-form: a plant with a distinctly yonic appearance, which is created (so the Phœnix tells us) when a sentient being cannot cope with the harsh atmosphere on this planet and dies. Makimura can’t become one, but Nana can – and does. Salta too is cursed by the Phœnix when he tries to kill Makimura – himself and his descendants doomed to wander the reaches of space forever. END SPOILERS.

Honestly the way Nana is basically used as the object of three horny men’s attentions throughout the film, and also the fact that none of these men are particularly decent, kind of makes her decision at the end of the film understandable. At the same time, the doormat-level passivity that is given to all of the female characters in Phœnix: Space Chapter (not just Nana but also the bird-people), and the fact that the plants on the exile-planet are essentially made up of female legs and boobs, leaves the viewer with kind of a queasy feeling about the whole thing… as though we’re watching some kind of Freudian trip into Tezuka’s subconscious. 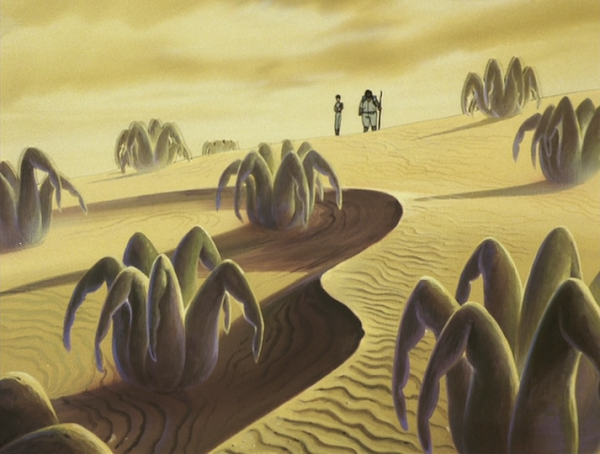 Again the themes of compassion, reincarnation, karma and the tension between choice and fate all appear here, but the kind of profundity, intense character-building and layered storytelling that made Karma Chapter and Yamato Chapter so thought-provoking is not to be found here. There is an attempt made, and that attempt consists of a series of flashbacks and explorations of the four-way love quadrilateral that make up the middle of the piece. But as plot twist is heaped on plot twist, including a great big fat robotic reveal that’s handled with all the subtlety of ED-209’s criminal apprehension protocol, eventually suspension of disbelief becomes hard to maintain. If Nana knew about the robot on the ship, why didn’t she tell anybody? Why did she keep the secret to herself while they were all trying to sort out the mystery? The exposition dump at the end of the film made the conclusion seem perfunctory and unsatisfying. The moral universe seems badly truncated, as apparently the only good character in the whole show dies pitiably and pointlessly, and Salta trying to save Nana from a manipulative genocidal maniac (even in baby form) is considered equally as bad in the Phœnix’s eyes as being a manipulative genocidal maniac. Ah, well.

It’s still worth watching, if just for the nifty set pieces and cool artwork. But when laid side-by-side with the other entries in the Phœnix OVA series, it comes up far short. Even Phœnix 2772 actually looks favourable in comparison to Space Chapter, since the story there seems more congruent with what Tezuka was aiming for in terms of anti-war, human survival and environmental messages. 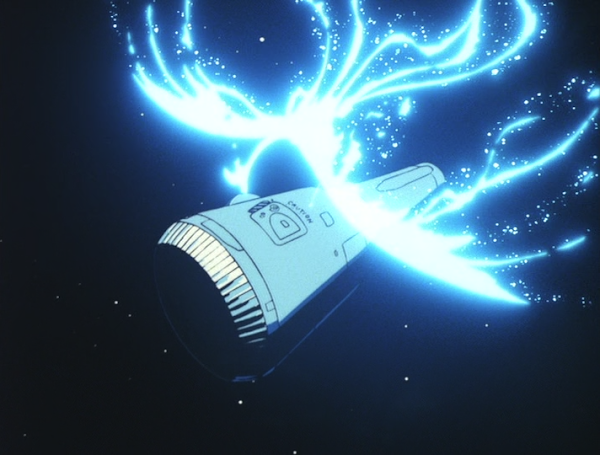