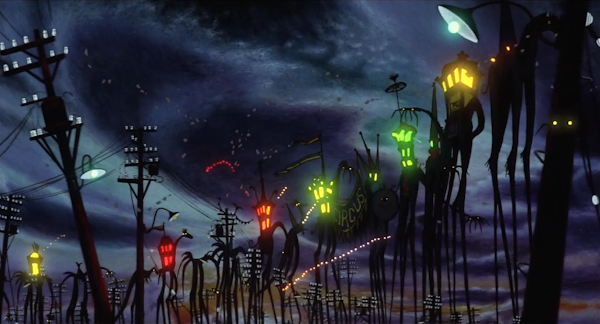 I had been planning on doing an entry here on Paneurasianist Weeb on an old favourite of mine, Rintarô’s and Ôtomo Katsuhiro’s collaborative 2001 feature-film rendition of Tezuka Osamu’s Metropolis. I was first introduced to Metropolis, actually, when I was teaching English to fifth-graders in China – it was a favourite of theirs along with The Secret World of Arrietty, and I remember putting on both films for movie night in class. I am convinced now, however, that there were entire layers of symbolic reference that I had missed in Metropolis, which is intimately connected with another, earlier Madhouse production – 1987’s Meikyû Monogatari (Labyrinth Story), a sometimes-overlooked classic of Japanese cyberpunk which served as a template for, for example, The Animatrix. Therefore, my look back at Metropolis will have to wait for another day while I review this quirky, beautiful, bizarre, sublime and disturbing collection of shorts from three great mangaka and animators of the 80s: Rintarô, Kawajiri Yoshiaki and Ôtomo Katsuhiro. The three shorts in this anthology are: ‘Labyrinth Labyrinthos’, directed by Rintarô; ‘The Running Man’, directed by Kawajiri; and ‘Construction Cancellation Order’, directed by Ôtomo.

‘Labyrinth Labyrinthos’ serves as a mini-story with its own characters, but it also provides the narrative frame for the other two stories, and it also sets the dark, surreal and dreamlike tone for the composition as a whole. Sachi and her fat new black-and-white cat Cicerone are playing hide-and-seek in a traditional Japanese house. Sachi plays with her mom’s lipstick, drawing whiskers on herself. The red glow of the lipstick pervades the whole house, and flowers begin to blow inside. Sachi finds her cat hiding inside an old grandfather clock with a swinging pendulum, which opens a door – like the cupboard in Narnia, or the looking-glass in Alice’s Adventures – into another world. In this labyrinthine world, antique mirrors within mirrors serve as gateways to deeper levels of unreality. 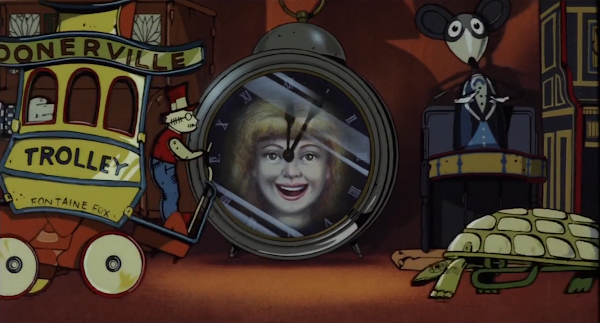 Wind-up toys come alive, or living people are shown to be cardboard cutouts, or made of clockwork themselves. Ghosts go by, tin cans randomly kick themselves and throw green sparks, and sometimes collars for invisible barking dogs. Spectral trolleys are conducted by skeletons and serve skeletal passengers. Shadows fester and ooze and grow over the labyrinth, and grotesque carnival-looking creatures from doom metal album covers stalk the walls. Neon arrows and computer signs point the way further in, as our vision picks up CRT lines. Despite these grim visions, which occasionally scare the bejeezus out of the suspicious Cicerone, Sachi is calm, unflappable and even enthusiastic throughout, cheerily smiling on the skeletons and clockwork men and eerie circus creatures who appear before her. Throughout this surreal vision, Sachi’s and Cicerone’s guide is a silent mime in a white costume who often appears weightless and balloonlike, sometimes spectral and unreal himself. He directs them to a circus tent in the centre of the labyrinth, where the curtain rises on the other two shorts in the series.

Looking back from my familiarity with Metropolis, there were a lot of ‘ah-ha’ moments when watching ‘Labyrinth Labyrinthos’ in particular. The character design of Sachi, with her waifish build, innocent round face and oversized and hiked-up burlap pants, clearly served as something of a secondary template for Tima’s character design in Metropolis. In a similar way, ‘Labyrinth Labyrinthos’ also serves as a showcase of Rintarô’s æsthetic preference for nineteenth-century clockwork with its gears and pendulums, vintage clockwork toys and scissor puppets painted in the signature lithographic style, 1920s art deco in architecture and interior design, and – of course – classic European circus acts. All of these artistic motifs feature prominently in his take on Osamu Tezuka’s Metropolis. Despite the thematic heft and undeniable atmosphere of the short, it’s hard to shake the feeling that this is an arthouse piece, and that Rintarô is just using ‘Labyrinth Labyrinthos’ as an opportunity to flex his animator and director muscles. Still, the fact that he does it so well is enough to make one grin just as much as Sachi does. 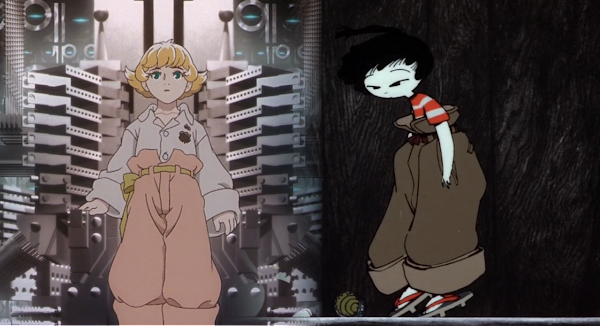 The other two shorts are much more traditional in their storytelling – much less Waking Life. Kawajiri’s ‘The Running Man’ follows a 10-year champion racer in the high-risk, high-tech extreme circuit race, Death Circus. Before his final championship run, the champion racer, Zack Hugh, has an interview with an investigative reporter – who discovers that he has been chronically overusing a training console and that the strain of the constant heats has destroyed his mind. In addition, he accidentally discovers that Zack Hugh has telekinetic abilities which rage out of his control when he is concentrating on winning a race. Hugh uses these abilities on the race track to ruthlessly destroy the other racers. After his final race, however, instead of slowing down, Hugh speeds up – seemingly distracted by the ‘ghosts’ of his own previous heats. He destroys his body and his racer in an attempt to beat his own time.

In this short, the story is fairly minimal, though one can see the clear influence it took from punk and racing films like Burst City, and its subsequent echoes in later cyberpunk tropes including the blurring of the boundary between man and machine and a fixation on extreme sports. This short can also be seen as a direct spiritual precursor to Kawajiri Yoshiaki’s and Koike Takeshi’s Madhouse-produced short in The Animatrix, ‘World Record’ – which also features the tragœdy of a racer who is compelled to push past the constraints of his own body in an attempt to beat his own records and to attain freedom from his physical limits. There’s not really much more to the story than that, except for an implicit commentary on how spectators treat athletes and how they are often drawn by the promise of bodily injury and death. The art style, however, is worth remarking on, as it departs significantly even from anime conventions of its own time. There is an intense emphasis on shadow and light, the broad planes of male facial features are heavily exaggerated, and tendons, veins, bones and muscles are intricately and painstakingly portrayed. There is a wild beauty in Kawajiri’s portrayal of the final suffering of Zack Hugh as he attempts to attack his own record. 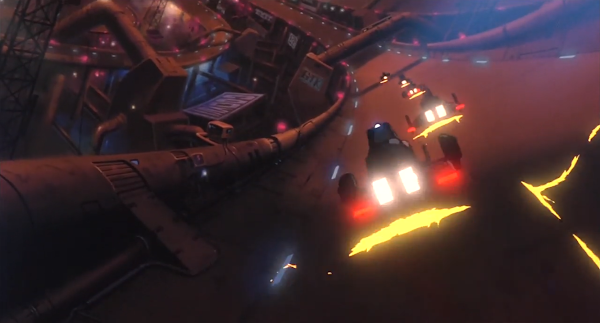 The third short, ‘Construction Cancellation Order’, is directed by Ôtomo Katsuhiro, who would later go on to direct Akira. This short is much more ‘pointed’ than the other two, and is much more direct in its positing a conflict between man and machine. On account of a revolution in the fictional South American Republic of Aloana, a construction project begun by a Japanese investment firm is given an order by the new government to shut down. The section chief at the firm sends white-collar worker Sugioka Tsutomu to investigate the death of the previous foreman and give the order to terminate the construction. He arrives at the construction site in the middle of the South American jungle, to find that the construction process – which has been completely automated and is being run by robots – has gone on without any orders from outside, and that the robots are intent on completing the project no matter the cost to the company, to themselves, or to anyone who would get in their way.

From a purely SFnal standpoint, ‘Construction Cancellation Order’ is the real gem of the collection. It is crafted, it features exquisite dramatic buildup and tension, it explores themes of logic versus emotion. It also touches on class relations, the madness inherent in late-capitalist overproduction and the futility of attempts to overpower and subdue nature – whether human nature, like the needs for food and water and sex, or the non-human living environment of trees, moss, birds and reptiles. The frustrations of the nervous and excitable Sugioka in attempting to get the robots to shut down, and his escalating series of confrontations with the glitch-voiced and infuriatingly-polite head worker robot 444-1, drive the entire plot forward.

The wonderfully-intricate, atmospheric and – again – occasionally nightmarish artwork of ‘Construction Cancellation Order’ are also worth remarking on, from the beginnings in the mist-filled Amazon complete with birds nesting on top of a submerged traffic signal in the middle of a river, to the final frame with a pipe-wielding Sugioka running off to do battle with the ominously-silhouetted central command structure of the construction project. We can see Ôtomo’s full range of talents on display here. The twitching, clunking, exhaust-spewing passive-aggressive mannerisms of 444-1 and the understandable nervous tics of the main human hero are both exquisitely and lovingly animated, and are given free rein to play off each other. The little details, like the previous foreman’s last letter to his wife and son scrawled on the chalkboard, or the increasingly-unpalatable breakfasts that 444-1 brings to the imprisoned Sugioka, also add to the stakes.

The battle between the rainforest environment and the robotic workers is also, frankly, Miyazaki-esque in scope, and the colourful (if doomed) robots’ operation of heavy construction equipment such as drills and lifts and cranes in the midst of mud and flood and torrential rain is iconic in its own right. We can see echoes of it, for example, in the Ba Sing Se arc of Avatar: the Last Airbender, in particular the sequence with the Fire Nation’s giant drill. ‘Construction Cancellation Order’ shows us Ôtomo at some of his sublime best, and we can see why it could only really be topped by the feature-length adaptation of Akira the following year. 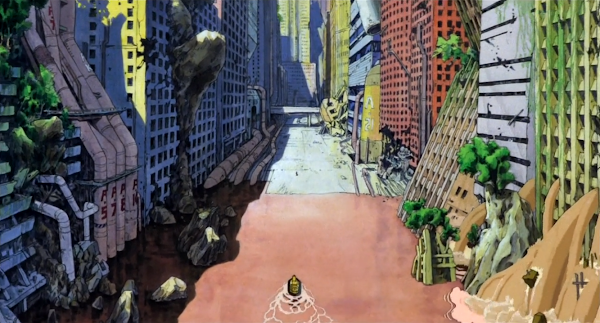 There’s a good reason that this one’s considered a classic. Meikyû Monogatari is sublime and ought to be treated as important viewing, particularly for fans of Rintarô, Ôtomo, Madhouse productions more generally, or pretty much any later cyberpunk work. The dark dreamscape atmospherics of the framing, and then the technical prowess shown off in the two stories that are encapsulated by it, are not to be missed.
Labels: 80s action anime shorts cyberpunk Japan political commentary science fiction