Trek to the cradle: The Pass 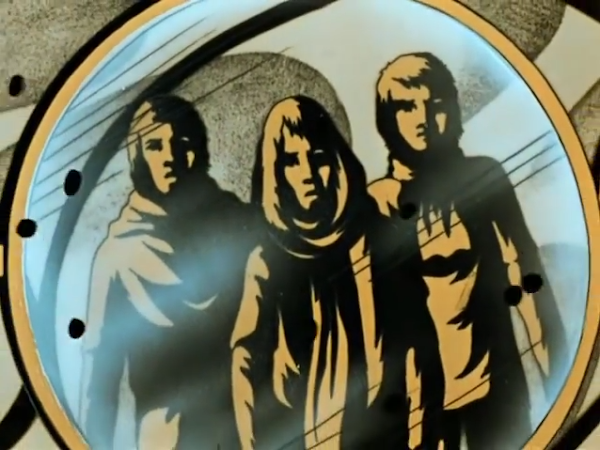 Vladimir Tarasov’s final work before the fall of the Soviet Union (and in some ways his magnum opus), the 1988 Soviet OVA The Pass, was introduced to me by friend of the blog Scott G. (He shared a link to the video here.) I say Tarasov’s, but in fact The Pass is a collaboration between Tarasov and the children’s science fiction author Kir Bulychev – who also wrote the stories and screenplays for Mystery of the Third Planet and Two Tickets to India. The screenplay here is in fact a faithful adaptation of the first chapter of his novel Those Who Survive. When the artistic visions of these two come together, the result is both sublime and hauntingly beautiful.

The Pass is the story of a family that has been stranded on an alien world for sixteen years, the last survivors of a starship crash, and their struggle to brave a high mountain pass in order to contact Earth and request a rescue. This pass, fraught with amorphous predatory beasts, treacherous terrain and dangerous radiation levels, has already claimed the lives of all of the other survivors of the crash who attempted to reach the ship. The older man and woman have three children – Dick, Oleg and Mariana – who understand only what their father tells them in stories about Earth society and culture. As a result, they embark on this quest with the enthusiasm and assuredness of youth, but they understand nothing of Earth society or culture except what their parents have told them. The eldest boy, Oleg, however, has a connexion with the ship from his very earliest childhood memories… 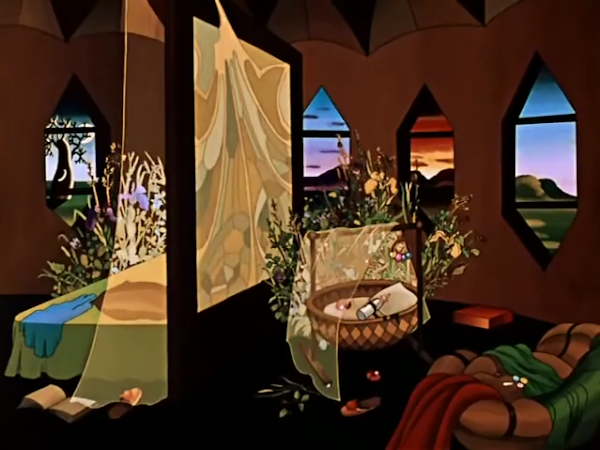 The drawing style is at once very archetypically Tarasov – wondrously crafted with a high-surrealist and psychedelic sensibility. There are strong parallels and even straight-up visual call-backs to A Mirror of Time and The Return in the shipboard sequences. The action sequences against the formless monsters of the wilderness recall the intro of Contract. So yes, it is very much a Tarasov film. But it also manages to be tonally quite different from anything else he had done before. The palette is much darker, given to high contrasts and large areas of black, as though he’d been taking his queues from Kawajiri Yoshiaki’s contemporary work… or perhaps from Frank Miller. Aided by this dark, brooding and existential tone, Pereval becomes something of a final artistic statement.

The feel of the film, even though it’s only a thirty-minute short, is epic. Realising that ‘epic’ is a term that broadly abused, in this case it really does apply: it is a trek across a vast and uncertain alien landscape, fraught with dark and shapeless horrors that seem by turns to be inspired by Lovecraft, Dali and Escher. In turn, this is a metaphor for a journey of self-discovery and existential value-creation in a world that is literally absurd. The journey involves a descent into the cradle, and the destination is monumental in its appearance and import. 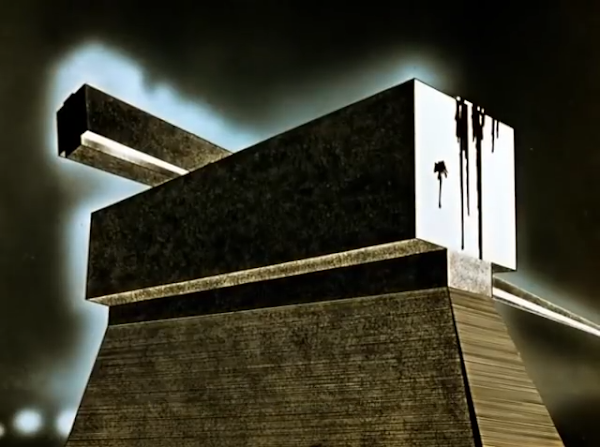 This epic feel is aided, of course, by the fact that the soundtrack is so exquisitely crafted and situated at the confluence of the baroque and the avant-garde. Whereas in his prior work Tarasov indulged a love of the poetry of Mayakovskii and the jazz music of the American 20s, here the music runs the gamut between experimental Soviet prog rock (arrangement by Russian rocker AB Gradskii and lyrics by famed poet AM Glikberg), the songs of Aleksandr Vertinskii and a synthesiser rendition of Johann Sebastian Bach’s Toccata and Fugue in D Minor for the pipe organ. All these things considered, the fact that the narrator is none other than the inimitable Aleksandr Kaidanovskii (the star of Andrei Tarkovskii’s Stalker, for Soviet live-action sci-fi buffs) is really just icing on the cake.

But apart from the music and the art style and the narration, it’s the story of the trek of the ‘savage children’ Dick, Oleg and Mariana across the inhospitable landscape of their adoptive home planet back to the Earth ship which carried their ancestors there, that really gives The Pass its weight. In a way, we are seeing things through their eyes. The nightmarish formlessness of the landscape and the monsters deliberately echoes a child’s recollection of strange places and the fear of the unknown. Because we are dropped into this frightening and strange world from the same perspective as the children, we actually feel the tension that they feel: between the higher-order knowledge of the importance of recovering the ship and contacting Earth, and the sheer distance between that quest and anything within their own experience. 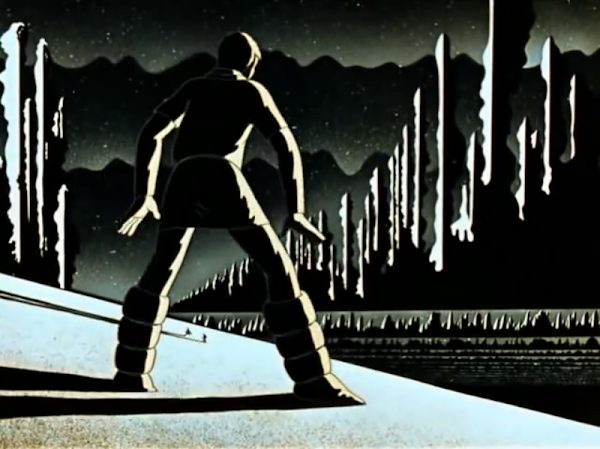 There is something MacIntyrean and A Canticle for Leibowitz-esque about the setup wherein the book-knowledge the children have gained from their father is something for which they have no background or context to be able to grasp it fully. Symbolically, this is conveyed by the rather blunt visual reference to Plato’s allegory of the cave at the beginning of the film, and their rote understanding (or lack of understanding) of what ‘radiation’ is, what a ‘goat’ is, or what ‘sweetened condensed milk’ is. These three children are vulnerable, innocent and naïve – and those things highlight the bravery of their quest all the more strongly. We suffer with their losses, and rejoice with their discoveries. Despite the subtext of a Nietzschean wrangling with godlessness in the lyrics, what the children seem to want and strive for in their struggle to grasp something from Old Earth does appear to have a transcendental, even spiritual, dimension.

The Pass truly is a keeper of a Soviet short: easily among the best – if not the best – of Tarasov’s films. Tarasov’s ability to make us sympathise with children whose shadow-obscured faces only ever appear halfway in any given frame is remarkable, as is the ease with which he manages to build and elaborate on a vast world in the mere half hour he is given. As such, The Pass is a survival film, a family adventure, and an SFnal high-concept piece all rolled into one, but it is also much more than merely the sum of these parts. Definitely do follow Scott G’s advice and give this one a watch. 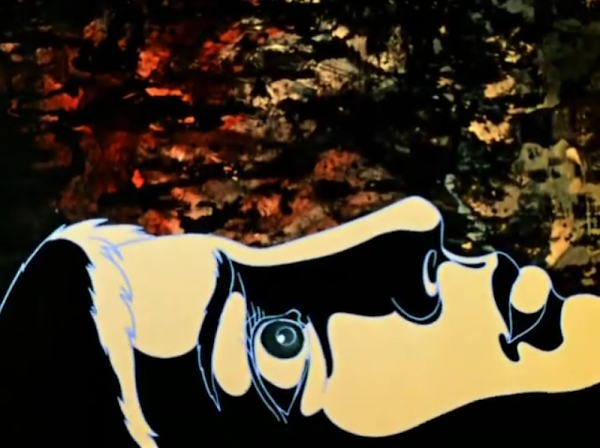