So here is one of Vladimir Tarasov’s better ones. 1978’s Contact is a Soyuzmul’tfil’m animated short with no dialogue and incredibly little (but highly effective) voice work. But it follows the story of an extra-terrestrial who comes to earth, and meets a human man. Although the two of them have some misunderstandings, owing to their radically different perspectives and physical makeup, eventually – largely through the dogged persistence of the extra-terrestrial to learn about this planet that he’s on – the two of them become friends.

The human, a painter who is out in the fresh air in a flower-filled meadow with butterflies and birds, spots a lake and decides to rest on the shore. An extra-terrestrial whose ship crash lands on the other side of the lake, spots him and decides to investigate. The painter is initially terrified of the alien – a rainbow-coloured being with triangular eyes and shapeshifting abilities – who is really only just curious about its new surroundings and the various shapes of animals and objects around it. The painter, who had been earlier fantasising about mounting the butterflies and caging the birds in the meadow, imagines that the alien wants to do the same thing to him. Eventually, when the alien takes on the painter’s shape and begins attempting to sing the same song he did – the theme from The Godfather, in point of fact – the painter begins to trust the alien. Seeing that he and the alien have more in common than he originally thought, the painter teaches the alien to sing the song correctly, and the two of them become friends. 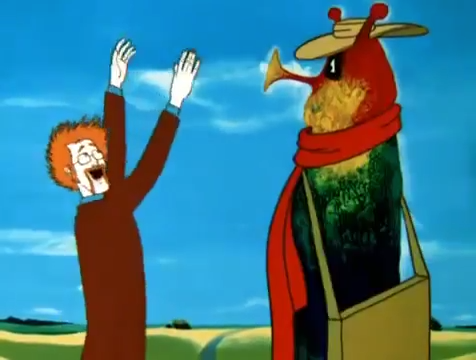 Contact is a truly beautiful and soul-stirring piece of animation. Spiritually there even seems to be a kinship between Contact and some of Pixar’s CGI shorts: like a number of Pixar shorts (Presto, Lou, Piper), it conveys a rich, complete story without the use of any dialogue. The lushly-animated meadow scenes of butterflies and birds are brightly-coloured and articulated in loving detail, easily the match of any modern traditional animated film. In fact, there are a number of stylistic similarities to Yellow Submarine in the painter’s character design (particularly the spectacles, the facial hair, the teeth, the 70s-style clothing) as well as in the emphasis on upbeat, iridescent psychedelia.

The eyes are the lamp of the body and the mirror of the soul – whether a human one or an alien one. (This is an explicit saying also in Japanese, and Tezuka Osamu’s trendsetting portrayal of eyes in his own cartoons may be one of the factors behind the enduring popularity of Japanese anime.) The eyes are also the portals through which we begin to understand something Other. 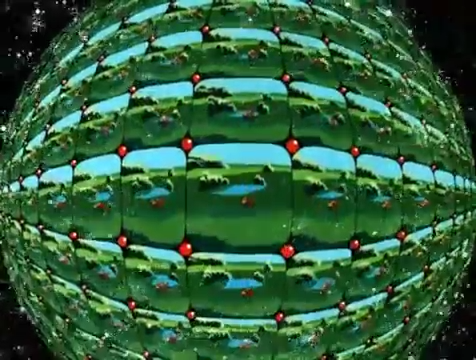 In Tarasov’s work particularly, one visual motif that crops up repeatedly is his focus on the eyes. We see this in A Mirror of Time with the stars reflected in the young boy’s spectacles in the opening scene. We also see this in Forward March, Time! with the close-up focus on Mayakovskii’s eyes being repeated over and over, and also on the cosmic eye out of which the UFOs come. In Contact, the obsession with eyes – whether eyes or eyeglasses – actually takes on an added significance. The eyeglasses of the painter reveal his true thoughts, desires and fears. The triangular, asymmetrical eyes of the shapeshifting alien are expressive and sympathetic, even though they are clearly not human. And in the end, we find that the entire sequence has been viewed through the multifaceted compound eyes of a grasshopper, which reflect the same picture back at us like dozens of tiny mirrors – as if we are asked to consider the tale from the standpoint of a different consciousness entirely. Good science fiction will always try to get us to at least tweak or change our perspective in one way or another, and that is precisely what Tarasov is doing here – as he delights in ‘turning the lens’ back on us as humans, getting us to understand how nature might see us.

First contact with an extra-terrestrial species is a longstanding staple of high science fiction, and Tarasov manages to tackle it in – if not an original way – then at least a highly humane and thought-provoking one. We see the contact with an alien species through the painter’s fearful eyes first… but this is the same painter whose instincts toward the butterflies and the birds are predatory. Although the primary message is one of friendship, understanding and coexistence, Tarasov is not blind to the darker, libidinous side of human nature, and he adroitly turns the lens back upon this both at the beginning, and more indirectly at the end, of the piece. In sum, Contact is an upbeat but multifaceted short which it is well worth the time to watch. I enjoy the fact that even though it is a sweet story which is appropriate for children, it doesn’t shy away from showing the darker side of humanity.