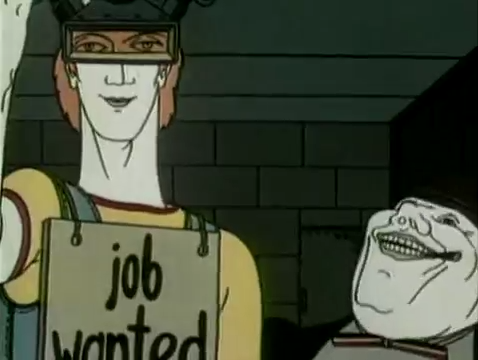 Continuing with my Vladimir Tarasov kick, the 1979 short Shooting Range (Тир) is a brilliant work of satire lampooning American capitalism. Although Shooting Range is clearly propaganda in the same vein as Forward March, Time!, somehow this short is far more effective. This short shows that Tarasov is far better when he is criticising capitalism than he is when recapitulating a partial Soviet narrative of Russian history.

The story – spoilers ahead – goes like this. A young man down on his luck, with nothing but a broken-down car, a cuckoo clock and a pack of cigarettes, puts on a placard saying ‘Job Wanted’, and goes out looking for work. He is approached in the street by the proprietor of a shooting gallery, who gives him the job of resetting the targets that fall when they get shot. The boss soon figures out that he can make more money if he lets people shoot at the boy as well as at the targets. The boy tries to quit, but when he sees many people in the street with placards lined up for the same job, he feels as though he can’t. And so he begins his job as a moving target, dodging the bullets from the gallery as best he can. Eventually he meets a homeless girl who helps him sweep up the gallery of bullet casings. They get married, and the boss puts up a sign about there being two live targets. They begin a life together in the gallery with people shooting at them all the time as they get up, get dressed and eat breakfast. The boy learns that his wife is pregnant, and is initially overjoyed. But when the boss learns about it, he advertises that the shooting range will have three live targets, and tries to paint target marks on his employee’s wife. Enraged, the boy overturns the paint can on his boss’s head, and the boss destroys his cuckoo clock. The boy and his pregnant wife leave – but the boss at the shooting range quickly finds another unemployed couple to take their place. End spoilers. 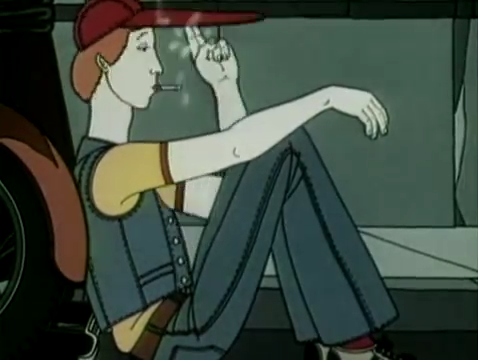 As with Contact, there is no dialogue at all in Shooting Range. This means that the entirety of the story is based on showing rather than telling, and the emotion has to be carried by the animation work and by the soundtrack… which is all instrumental jazz with a prominent saxophone part. The artwork is heavily caricatured, but the effect is not quite the same as in Tarasov’s earlier work. The capitalist owner of the shooting gallery will be instantly familiar to any connoisseur of Soviet propaganda: a bloated, insincerely-grinning, cigar-chomping fat cat in a black tuxedo, bowtie and top hat. But apart from that, the facial forms (exaggerated nostrils and individual teeth) and the expressions actually somehow seem to anticipate Beavis and Butt-Head more than reflect other contemporary styles in animation.

Tarasov and his artistic team also reveal their talent for adapting American cartoonists’ artwork for the purposes of caricature. Mickey Mouse and Goofy make appearances as targets in the gallery, as do Dumbo, Thumper and two of the Dwarves from Snow White… all instantly recognisable and even played straight. Disney is only one ‘target’ of the lampoon, though. American brands like Camel cigarettes and Coca-Cola are also prominently placed as part of the ambience of capitalist exploitation. The plight of the two protagonists, their lives constantly in danger, is belied by the golden promises of happiness that always seem out-of-reach. The punchline, however, shows Tarasov being a bit optimistic: the two shooting-gallery workers eventually wake up to how they are being dehumanised, and fight back. This reflects a Soviet belief – a rather naïve one in retrospect – that eventually the benevolent façade of capitalism would crumble and that its true nature would be exposed to those that it victimised. Once again, though, Tarasov’s beloved eye motif comes back – this time with the iris and the pupil being a point of reflection for the targets. This time, the ‘turned lens’ is meant to highlight the distinction between human and non-human, living and inanimate… and to point out to us the difference while showing capitalism as a system to be indiscriminate. And this part of the satire points us to something true: capitalism does consider labour as a distinct and fungible ‘quantity’ which can be divorced from the worker who provides it. This theme is somewhat deepened as the inanimate targets themselves – and the cuckoo clock – are made more sympathetic than the faceless customers who shoot at them (and at the workers).

There is a deliberately-anachronistic 20s feel to the setting, which I can best describe by pointing to animations with a similar emphasis on steampunk-ish clockwork æsthetics, such as Meikyû Monogatari and Metropolis. The reason for this, I imagine, is that this particular art deco retro-futurist style would have been recognisable to Soviet audiences as distinctly New World and distinctly American. The jazz accompaniment which carries a lot of the emotional dynamics of the story, however, shows that Tarasov didn’t find American cultural output to be completely lacking in grace. Interestingly – and this may be something of a calculated Brezhnev-era ‘thaw’, but it’s appreciated nonetheless – the workers’ ordinary Christian religiosity is not despised or mocked, but instead treated with a degree of deference and respect, in marked contrast to the capitalist’s callous disregard for human life. Indeed, Tarasov shows nothing else but sympathy and even admiration for the two working-class protagonists who are constantly being shot at – suggesting that American workers handle the employer-imposed risks of their own jobs and lives with a like panache and flair.

The proto-steampunk and retro-futurist æsthetics are certainly here, but their use is not to uphold any particular science-fictional concept. Instead it is to highlight and satirise the contemporary setting. Unlike other works by Tarasov, there is no real SFnal element to be seen here… unless the satire and critique of American capitalism itself may be considered as such. There is also a more ‘cartoony’ feel to this short than there is to other Tarasov Soyuzmul’tfil’m productions, though that may be part-and-parcel of Shooting Range’s lampoon of contemporary Disney.

Shooting Range is not as thematically ambitious as other Tarasov shorts. In terms of technical style, it also showcases a narrower range of his talent. The high surrealism and the psychedelic sequences make brief appearances here, with butterflies and birds that recall Contact, but they serve only to highlight the American workers’ seemingly-unattainable dreams of happiness. That said, when it comes to parodying American consumer culture, the execution of the animation is nearly faultless. Despite the dingy, washed-out palette, the actual animation style is ‘ahead of the curve’ in some ways. It’s still Tarasov, and it’s a pretty deep-cutting Marxist commentary on capitalist alienation, but there are works that better showcase his range and depth of ability. 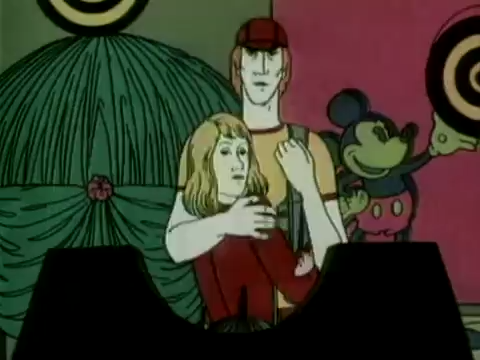