Vladimir Tarasov’s third directorial work, 1977’s Forward March, Time! (Вперед, время!) is another Soyuzmul’tfil’m short, which is based on and inspired by the patriotic Soviet poetry of Vladimir Mayakovskii. Similarly to A Mirror of Time, Tarasov puts a wondrous panoply of talent on display here, again blending cutout animation and dynamic stills of high modernist Soviet painting with traditional pen-and-ink styles, and again showcasing his preference for and mastery of 70s psychedelia. The message is straightforward, uncompromising, blunt and guileless: that the humane and future-oriented glories of the Soviet society will and must prevail over the brutal forces of reaction and the selfish greed of capitalism.

The story itself is something of a morality play, consisting of Russian history from around 1905 until the present… or the distant future. The Russia that we see at first is broken… both physically and morally. Late Tsarist promises of plenty, advertisements of snake oil and entertainments of all sorts – styled in a carictured Victorian kitsch – glare out at us in gaudy colour, interspersed with the haunting gazes of the hungry, overworked and languishing masses as they cry out for bread. The Russian Empire is depicted as a monstrous two-headed eagle with bloody clawlike feet. Revolution happens – then war. Finally we see montages of paintings depicting the rebuilding of the Soviet state. The clockwork motif appears again and again – again, always in a future-oriented fashion. 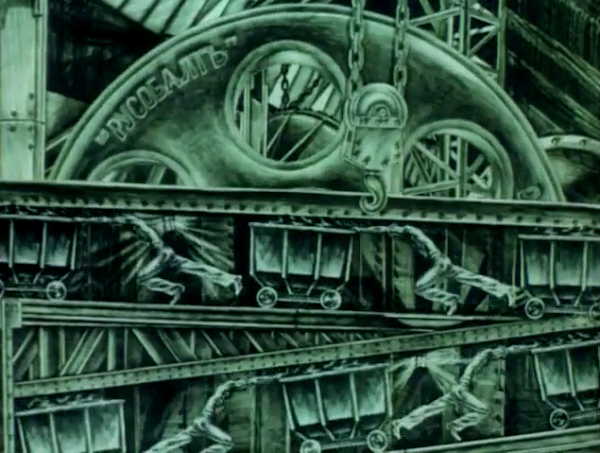 Tarasov’s traditionally-animated segments do clash on occasion with the stills and the paintings he places on display, and occasionally the tone and narrative shifts are disorienting. Nevertheless, we get to see here his incredible ability to mix multiple styles of artwork together into an almost collage-like composition, and still have it come off as… well, a composition. There can be no doubt it is meant to be viewed as a coherent whole with a coherent message.

There are very few independent characters to be seen here apart from the poetic narrator, though there are of course caricatures aplenty. The Russian masses are represented by hard, serious faces that march in unison for the country’s victory. Interestingly enough, the most consistent and intriguing character on display here is the theatrical, gluttonous, murderously-violent phonograph which appears to personify the spirit of capitalism. The mobile mouth of the phonograph first appears among the peddlers of material and mechanical and sexual excess to the wealthy to laud ‘how wonderful it is’. It quickly turns greedy as it sprouts arms and begins grabbing everything in sight, and later its mouth turns into a gun and it transforms itself into a massive, monstrous war machine, gunning down the soldiers who are defending the Motherland. 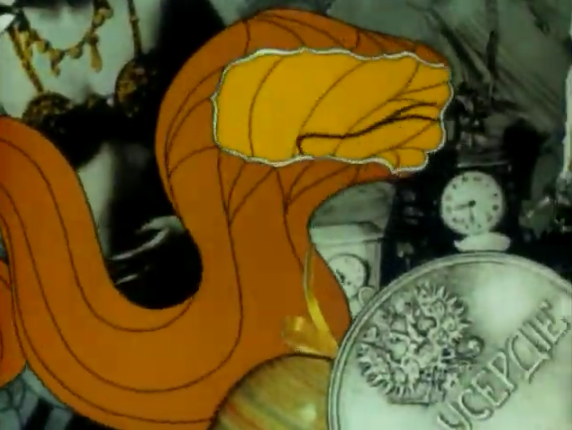 Now, I may or may not have remarked on this on Facebook before with regard to Eisenstein’s Battleship Potemkin, but the same holds true here for Tarasov’s Forward March, Time!: the great philosopher Nikolai Berdyaev is fully vindicated in his existential assessment of the Soviet psychology. Berdyaev understood the Soviets to have been following in the long Russian tradition of millenarian and schismatic sects. Although the apocalypse they foresaw and the salvation they proclaimed were of a very different kind than, say, the Old Believers or the various other sects, the Soviets nonetheless showed this religious sensibility when they established and propagated their state.

It was particularly amazing to me when watching Battleship Potemkin how Eisenstein completely unironically used snippets of Orthodox Christian liturgics to convey Soviet messages: ‘Memory æternal’, ‘On behalf of all’, ‘With one mind, let us confess…’. The same applies here. Even – no, especially – when Tarasov rails against religion, as he does when he shows the Orthodox Church blessing the brutalities of the Tsarist gendarmes, he shows himself to be equally religious and indeed motivated at base by the same religious drive as Orthodox Christianity. Tarasov’s fundamental, overriding concerns – or perhaps Mayakovskii’s – are spiritual and religious, rather than scientific. Tarasov is decrying not merely the material forms of oppression, but more so the spiritual and moral forms of degradation which he sees that capitalism brought to Russia. 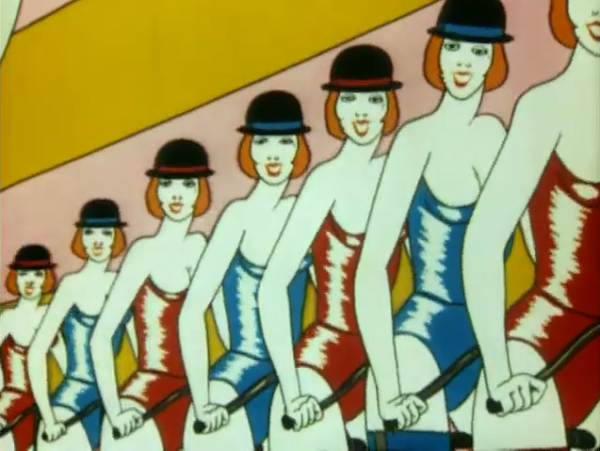 To be perfectly honest, too much of Forward March, Time! is too on the nose, and that is both part of its weakness and part of its charm. It is propaganda at its most naked, but also at its most æsthetic. Tarasov clearly pulled all the stops when it came to directing this short. In particular his clever uses of colour and space, stills and movement, put together with the narration of Mayakovskii’s poetry, make this short more than the sum of its parts. In this, Tarasov was clearly at the forefront of his time, as Soyuzmul’tfil’m was undergoing a crucial period during the late 60s and 70s.

Soyuzmul’tfil’m was essentially first put together in the mid-30s as the Soviet Union’s answer to Disney, who had shown several of his films at the Moscow Film Festival in 1935. In some cases, the Russians even worked on the same folkloric inspirations – like The Snow Queen and The Little Mermaid – at earlier dates than Disney. However, particularly between 1964 and 1980, the competition between the Russian and the American studios produced a great deal of innovation, both in direction and in technique, on the Soviet side. Tarasov’s œuvre is no doubt part of this studio competition, although he, like many other Soviet filmmakers, was clearly trained in classical methods and allowed his training to guide his work even as he experimented with different styles and media. 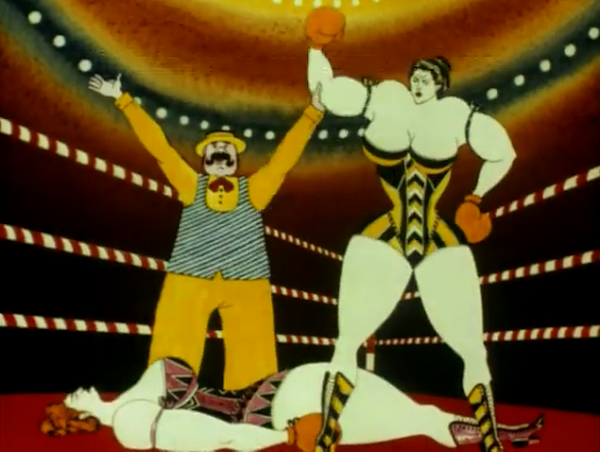 There is not as much high sci-fi in this work as in A Mirror of Time. There is a brief psychedelic segment at the end of the film, involving the phonograph, one of those ceramic cats with a coin slot in its head, and several UFOs which turn out to be friendly. At the end the UFOs, sporting Soviet stars and Mayakovskii’s name, come down and put paid to the phonograph, wrapping up like a package, stamping it all over and flying off with it, presumably never to return. One has to wonder if there wasn’t some Posadist influence here… though that would have been quite frankly anathema to official Soviet doctrine.

Again, this is not Tarasov’s best film by any stretch. Even though Mayakovskii’s poetry is beautiful and the narrator has a great voice, the accompaniment often feels rather wooden and static. The few SFnal elements are largely confined to the psychedelic sequence in the last quarter of the film, they are near-silent, and – unlike in A Mirror of Time, say – they are fully at the service of the propagandistic themes. Even so, there’s quite a bit of artistic talent on display here that can be enjoyed, and the collage-like comic cutout art and Victorian caricature is still as charming as it was in the previous film. 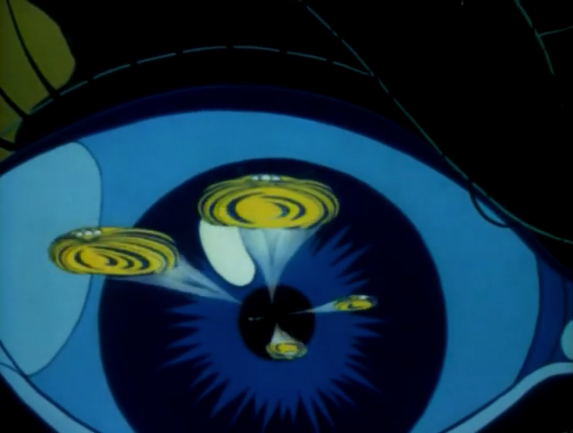