Can’t give you anything but love: Contract 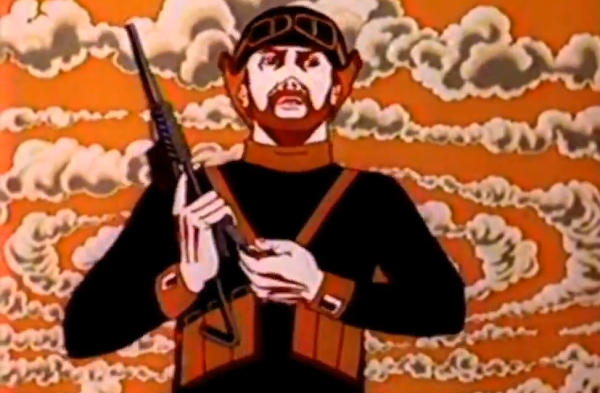 More Soyuzmul’tfil’m, yes! This is as good a point as any for me to give some long overdue credit and props to Barbara-Marie Drezhlo, whose blogging about Cheburashka clued me in to some of the awesome things that that studio has done over the last six decades or so. After watching Tarasov’s bizarre, sketch-like 1982 short The Button (whose animation style, though not tone, at points reminded me of Dianne Jackson’s British OVA The Snowman from the same year), I did want to touch briefly on his follow-up to Contact, which is 1985’s similarly-named, and similarly-themed, Contract (Контракт). This seems to be a logical process of development in Tarasov’s œuvre, combining his space-operatic sensibility and his desire to understand the unknown, with the hard-left politics which are the central focus of his propaganda pieces.

The plot is as follows, and of course there are spoilers here. A single human colonist is sent alone to an ‘uninhabited’ world, and he is instantly attacked by a number of ferocious beasts. His gun jams, and he is at their mercy – his life is saved at the last moment by sales robot QBF-41, who throws up a personal force-field around him. After learning that the beasts were in fact part of QBF-41’s ‘inventory’, the colonist rudely sends him packing. But soon the colonist is forced to deal with the greedy Sezak Corporation which he has contracted with. Even though he had been assured in his contract that he would be shipped necessities from Earth free of cost, the Sezak representative tries to extort him on shipping fees when he tries to order a razor blade and some shaving cream. QBF-41 offers him a free bottle of the shaving cream he’s selling, which the colonist initially rejects, but when he discovers Sezak’s extortion he accepts. Unfortunately, QBF-41 is also under contract, and he gets in trouble with his owners for offering goods free of charge, and for making friendly contact with an employee of a competitor company. The two exploited employees – human and robot – understand that they’re both being used by their employers, and decide to help each other out to survive on their new planet, in defiance of both their bosses. End spoilers. 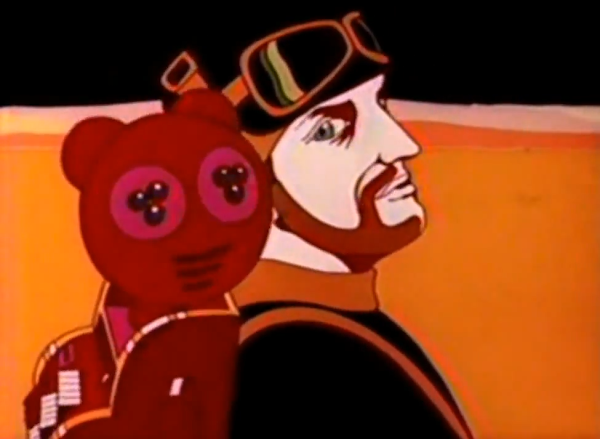 Is there a propagandistic ‘edge’ to this story? Of course there is. It’s an anti-capitalist morality tale. It’s got a pair of greedy, shifty, coercive corporate bosses lording it over their employees, and an ending which emphasises sharing, brotherly cooperation and an explicit renunciation of the profit motive. But it’s also fine high science fiction and space opera, with something of a pulpy retro feel to it. The rayguns, the Rubik’s cube-like matter transmission device, the floating fortresses… are all staples of an earlier generation of futurism.

The artwork as well is a bit different from Tarasov’s earlier directorial work, though it’s clearly still Tarasov. The psychedelic components are far more subdued here, and where they appear they are placed at the service of the ‘illusions’ of the corporate contract that the colonist is under… or else at the very end where it’s revealed that the planet the colonist and the sales robot are stuck on is in the shape of a blooming flower. The animation is straightforwardly traditional and fluid – there’s very little of the ‘sketchy’ experimentation and pointillism that were present in The Return, and the transparent shifting still frames really only appear with the nightmarish monsters that attack the colonist at the beginning. The cutout caricature style that marked Tarasov’s 70s work is somewhat present in the Sezak executive’s character design and exaggerated Gilded Age mannerisms, but again, the animation for this character is much more streamlined and traditional in style. 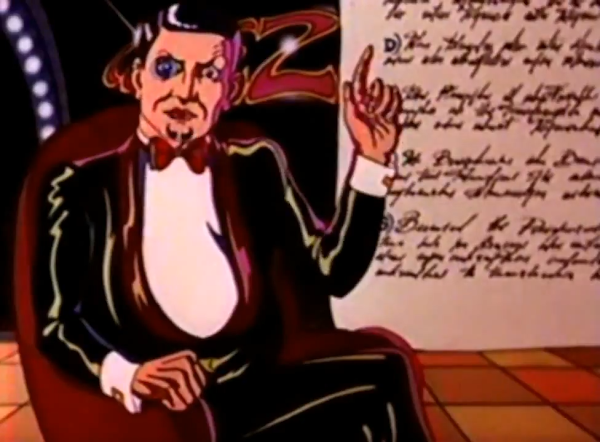 Although the human colonist is kind of your staple Bat Durston space-frontiersman – albeit with typically Russian mannerisms and dress – the character design of QBF-41 is worth remarking on. Perhaps fittingly enough for a ‘sales robot’, he looks a bit like an overgrown old-time cash register. His face looks a bit like a service bell, and his arms are of course based on the cranks you see on the side of such cash registers. His voice and his sales pitch are a bit grating at first – as clearly they are meant to be to the colonist.

With regard to QBF-41’s mannerisms: his literality and self-avowed lack of a sense of humour, as well as the understandable human reaction to it, appears to be a foreshadowing of Kawajiri’s VARSUS from Cyber City. But we quickly see that he has a bit of the Ôtomo Katsuhiro-esque clinkety-clank charm of the junk robot Albert or, say, Norby or WALL-E… something of a necessity if you’re going to make your robot a sympathetic working-class hero. But it’s really the fact that he’s willing to override his programming to help out the only other living being within range that makes QBF-41 a sympathetic character. 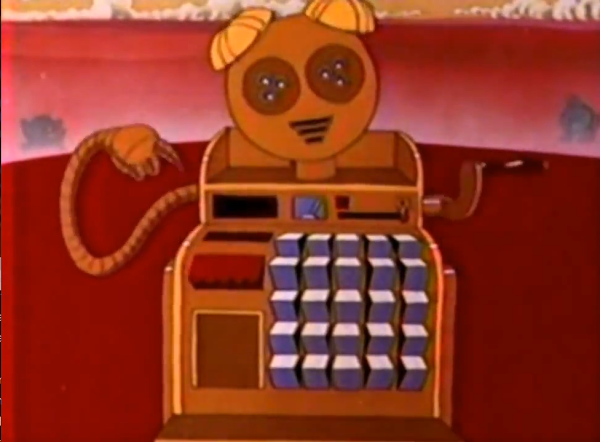 I should probably talk a bit about the soundtrack as well. As with Shooting Range and The Button, Tarasov makes no bones about his preference for jazz. But in Contract there’s a name and a voice to it: it’s Ella Fitzgerald’s ‘I Can’t Give You Anything but Love’! This is done in a similar vein to Ôtomo Katsuhiro and Rintarô’s sublime use of Louis Armstrong in Metropolis as both accompaniment and storytelling device. Ella Fitzgerald’s song encapsulates the growing trust between the human and the robot, as well as the constraints that they’re under and their means of survival.

As a late-Soviet short, and within Tarasov’s body of work, Contract does hold up pretty well. It does have a strong point to make on œconomics, and also a certain propagandistic tint to it. However, it clearly also has a soul that transcends this. Contract takes the first-contact theme of its 1978 predecessor as a starting-point, and deepens the considerations of difference and similitude. The building of the relationship between the human and the robot – which culminates to the point where one is willing to sacrifice himself for the other – feels authentic and earned, even if it is rather forced on them from the outside. 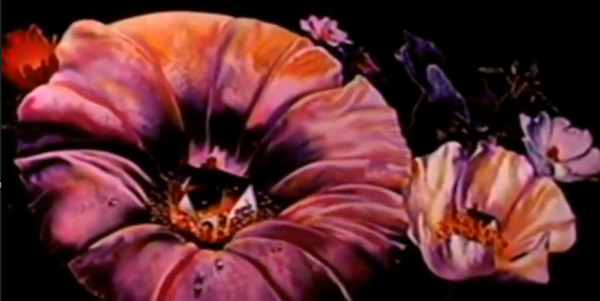