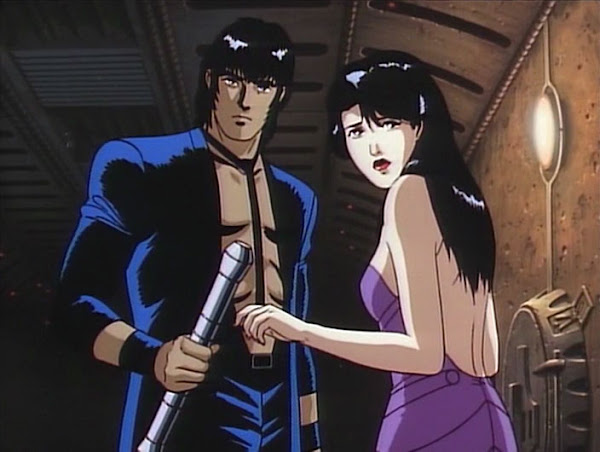 There are certain things that don’t really need a cyberpunk remix, and never did: Wu Cheng’en’s classic fantasy novel Journey to the West being one of them. Take Sun Wukong from that novel, mix-and-match him with Saeba Ryô from City Hunter, take away his sense of humour, give him a white Corvette and a cheat-mode cybernetic eye along with a robotic Ruyi Jingu Bang, plonk him down in Neo Tôkyô and surround him with Wicked City-style sexploitation and (cybernetic rather than supernatural) body horror. Now dumb down the plotlines of all of those features about twenty IQ points. In a nutshell, that’s Midnight Eye Gokû.

Midnight Eye Gokû is a late-80s Japanese OVA produced by Madhouse and directed by Kawajiri Yoshiaki. Like most of Madhouse’s other material from this era, including Kawajiri Yoshiaki’s earlier Wicked City and Rintarô’s The Dagger of Kamui (which I will be reviewing here later at some point), it’s really technically impressive. This is, after all, the same guy who directed ‘The Running Man’. The animation is stunningly fluid, clean and powerful. The backgrounds and set pieces are bold, stylish and atmospheric. They really go all-out on delivering the glittering glass-and-neon skyscrapers and decaying, rusting steel-skeletal slums æsthetic of classic cyberpunk. The character designs are also really lush. Similarly to Wicked City, it’s a pretty safe bet that once you see a female character on the screen, it won’t be too long before you’re seeing a lot more of her, if you catch my drift. The detail which they lavish on rooftop pool parks and underground sewers is also really noteworthy and impressive, and the action and chase scenes in Midnight Eye Gokû are also well above the standard for 1989. In particular the vehicles (including Gokû’s ‘Vette and the motorised unicycles of a biker gang) are incredibly well designed and modishly rendered. 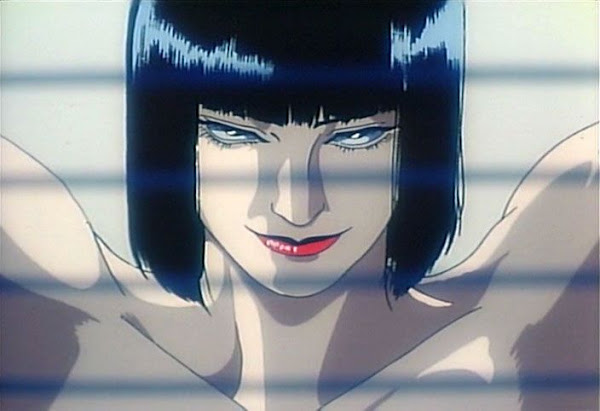 Spoilers follow. Basically, our private investigator friend, Furinji Gokû – the aforementioned mash-up of the Monkey King and the City Hunter – is trying to find out why so many of his friends from his former job in the Special Investigations Unit of the Tôkyô Police are randomly killing each other or suddenly committing suicide in gruesome ways. This leads him to an underground weapons dealer named Hakuryû (‘White Dragon’? Get it? Like the Dragon King from Journey?), who is using some kind of hypnotic power to kill off the members of the SIU. Gokû gets caught by Hakuryû and almost ‘gets suicided’ in the same way (a stripper with a glowing hypnotic peacock feather backpiece), but he stabs himself in the left eye to keep himself from blowing himself up in his ‘Vette. An unknown benefactor (the analogue of Maha Brahmā in Journey) gives Gokû a cybernetic replacement eye that can hack any computer system on the planet (like I said – cheat-mode) and a metal staff that can extend to literally any length and doubles as a gun / laser weapon of some kind. Given these tools which make him practically invincible, what does he decide to do? Why, he goes to town on the bastard who tried to kill him, of course, ‘cuz what else you gonna do with power like that? Also, Hakuryû’s evil plot that the SIU was investigating is literally so boneheaded that it defies description. (Hint: it involves using bird gonads as vectors for biological weapons.)

There’s a second half to this OVA which features Gokû being hired to help out a high-up military woman whose brother has been turned into a plasma-bending, barrier-throwing super-soldier in a top-level military experiment, and is on the verge of going berserk. Of course, neither the woman nor the military agency she belonged to were completely on the level, and Gokû ends up being dragged into a messed-up family feud. It, uh… doesn’t end well. Along the way he hacks into the Pentagon and the Kremlin and gives his ride a Batmobile upgrade along with some James Bond gadgetry of a distinctly Moonraker-styled concept. 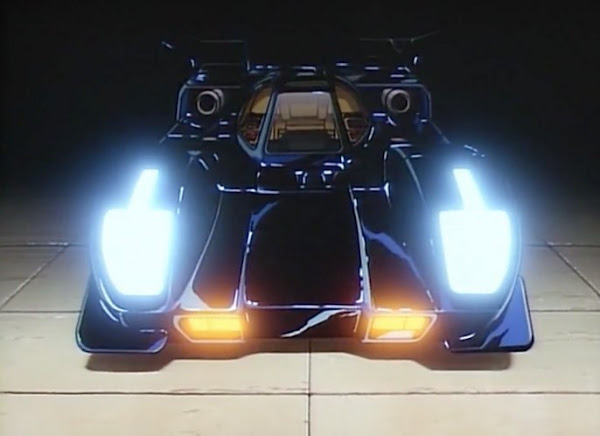 If you happened to read through the spoilery bits above, you’ll understand that the plot is aggressively stupid, and it really only halfway works if you understand it as a hard R-rated pastiche of Journey to the West. The fact that it involves turning Sun Wukong into an unlikeable, swaggering, womanising, shirt-eschewing, Raymond Chandler-ing private investigator in a neo-noir cyberpunk world should give you a hint at how completely misbegotten the entire concept is. Both the sexual and the cultural politics of MEG are shamelessly right-wing. Rule of law? Yeah, screw that. Privatised vigilantes with total surveillance powers? Awweschome. Countries other than Japan? Who cares! Women? It’s kind of telling that even the gratuitously-exploitative, softcore-hentai Wicked City somehow manages to be less knuckle-dragging in its misogyny than Midnight Eye Gokû. Unlike practically all of the women in the latter, at least Wicked City’s Makie – despite being treated like a sex object by everybody else – has a well-defined personality and agency of her own, and, spoiler alert, does get her way in the end. All the women in MEG are either men’s (sometimes literal) playthings or else devious, murderous sex kittens. And Gokû’s internal monologue at the end of the second OVA is over-the-top cartoonish Reagan-era woman-hate. That said, if even the concept of the redheaded motorcycle-stripper killer cyborg in the first OVA doesn’t make you crack a smile, there may not be much hope for you.

Like I said above: if you’ve got the stomach for it, you’ll find that the art direction and animation in Midnight Eye Gokû are all really top-notch. It really manages to recapitulate a certain cultural mood, and one can see why expecially background stills from MEG are still considered so iconic. But if you really develop a hankering to watch some early Kawajiri Yoshiaki-directed trash cinema, I’d really recommend Wicked City over this any day.
Labels: 80s action books China cyberpunk Japan schlock science fiction