Peeking into the past: A Mirror of Time First, a note of apology: I entitled this blog as the Paneurasianist Weeb, but so far the vast majority of the media that I’ve been reviewing on here have been Japanese anime films and OVAs (the occasional C-drama, Russian schlockbuster and Hong Kong cop movie notwithstanding). To some extent this is understandable, as Japanese anime are by this point drastically more familiar to Western audiences and therefore an easier pop-cultural medium to talk about. But I am a critical fan of Japanese animation, and my fandom does extend to other pop-cultural and geek-cultural media, which hasn’t come off here particularly well. I’m at a point on this blog where it seems appropriate to branch out a little bit and start talking about other cultural products from the rest of Eurasia.

The Soviets, in fact, produced a dazzling number of animated shorts and not a few full-length features, many of which were under the Soyuzmul’tfil’m label. I am looking into one of these Soviet-era shorts today: Vladimir Tarasov’s 1976 short film A Mirror of Time (Зеркало времени). The main plot follows a young boy and an older man who are on board a ship somewhere out in space, as they discuss the nature of time and the human fascination with time travel. They discuss scenarios such as those featured in Mark Twain’s A Connecticut Yankee in King Arthur’s Court, and HG Wells’s The Time Machine. Then the man explains about a phenomenon in which villagers in central Europe saw a terrible battle in the clouds, accompanied by great explosions and fire, which later historians determined to be the Battle of Waterloo. Based on this phenomenon, we get to see that the man and the boy are actually manning a space telescope and mirror (hence the film’s title) which uses reflected starlight from far-off nebulæ to capture images and events from Earth’s past, even millions of years into the past. These two are not merely explorers of space, but – as we see – explorers of time. First, it’s worth remarking on the animation. It’s dated, but the animation quality in A Mirror of Time is stunning in its sheer variety and creativity. Tarasov clearly drinks from the same retro comic cut-out wells that inspired Terry Gilliam’s animations for Monty Python, and his Victorian segment instantly calls to mind the pseudolithographic style of (the much later) Wondermark. There are stylistic dashes of high surrealism as well, of the Salvador Dali variety; also, the traditionally-animated segments call to mind the same psychedelic palette and sensibility that was part of the charm of Ai City.

I’d call it Robot Carnival-esque, but for the fact that A Mirror of Time is the creative outpouring of one man rather than eight. The literal kaleidoscopic displays of colour and light that we get to see in the field of stars seem to be almost an expression in motif of Tarasov’s own breadth of talent. Tarasov’s œuvre, beginning in earnest with this short, reflects the optimistic Soviet high-modernist spirit which would later prove to be one of the inspirations for the atompunk æsthetic. We can see this in the clean-lined, clean-shaded, sleek contours of the technology that the two time explorers use… there is a markedly different ‘feel’ to the modern-day segments than to the flashbacks, which, as mentioned before, have a rather caricatured style to them. 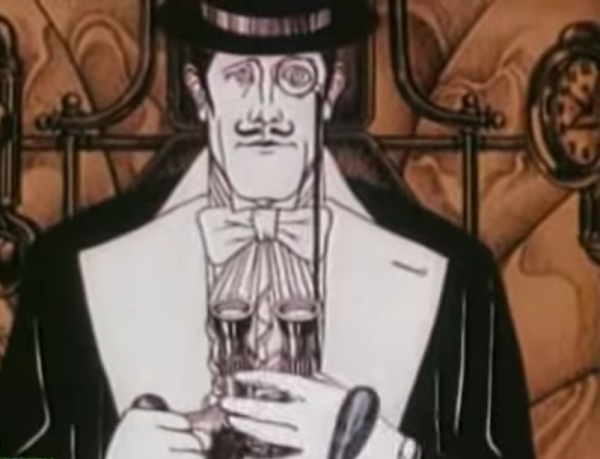 Tarasov’s SFnal concept, too, is a rather interesting one. The use of several reports in early modernity of visions and apparitions in the sky which were later interpreted to be earthly battles rather than heavenly portents, clearly indicates a certain ideological preference on the Soviets’ part to find scientific, materialist explanations for phenomena which were formerly regarded as spiritual. But Tarasov clearly takes that in a direction of his own – positing an application of the same phenomenon of light travel and reflection and the use of telescopes and mirrors that would allow human beings to view their own past in the same way we view the stars. Of course, looking back now from 2021 on a film from the late 70s seems to be its own exercise in time exploration, and like the time explorers seeking the dinosaurs among the reflected light of far-off nebulæ, we can view here the traces of a Soviet æsthetic which is to some extent still with us, but also to some extent – and regrettably – an evolutionary ‘road not taken’.

This certainly isn’t Tarasov’s best film, even among his shorts, but it certainly set a tone for what he would later do. I’m looking forward to going further in depth into the works of Vladimir Tarasov and into the animations of Soyuzmul’tfil’m more generally on this blog. This will probably be one of the directions – along with Japanese cyberpunk and Chinese martial-arts films – that I end up taking as part of my exploration of geek culture and Eurasianism. 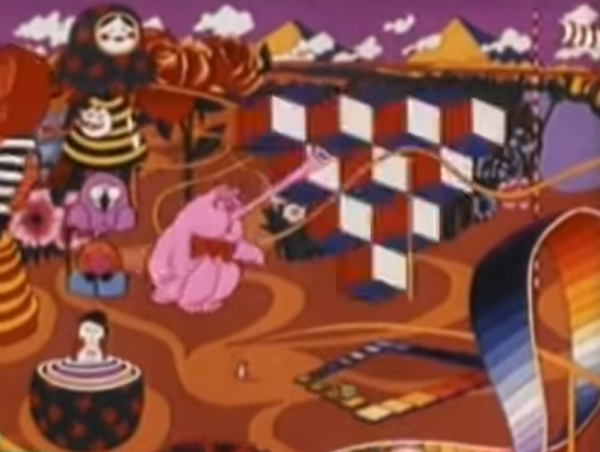