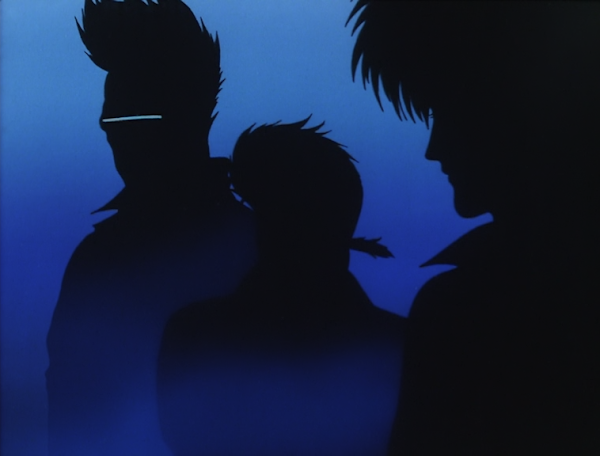 The first works of Kawajiri Yoshiaki that I ever saw were his shorts in The Animatrix, ‘Program’ and ‘World Record’. Both of those were incredibly well-written and well-animated shorts. It’s really only recently that I’ve become acquainted with his work in the 80s and early 90s.

The one thematic constant in Kawajiri’s works from this time appears to be a love of both noir and tech (though it doesn’t necessarily amount to tech-noir). Kawajiri loves his starkly-contrasting blue-heavy palettes; his thick, almost stained-glass ink lines; his morally ambiguous worlds; his tough-guy Raymond Chandler-esque heroes; his femmes fatales (and boy does he ever love those!). 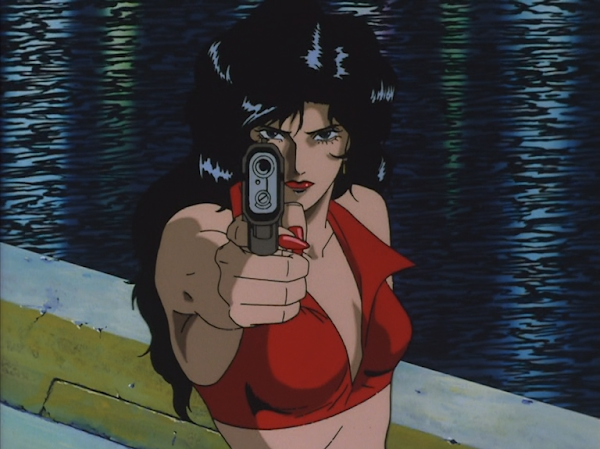 I want to be clear about this: I absolutely love ‘Running Man’. But Kawajiri’s obsession and chasing after a particular mood in his films and in his OVA animated work, occasionally leads him out of the bounds of proper taste. Although I would still class Wicked City as art on account of its neo-noir stylings and proper storytelling, it is absolutely exploitative and misogynistic, and the sheer acreage of female flesh on display along with the obsessive symbolic body-horror fixation on monstrous demonic vulvas causes it to almost shade over into hentai territory. Even though Midnight Eye Gokû is (slightly) less sexually-explicit, it unfortunately also has the distinct demerit of also being just plain dumber than Wicked City—as I put it, it’s the cyberpunk private-eye remix of Sun Wukong’s backstory in Journey to the West that nobody wanted or asked for.

Cyber City Oedo 808 actually highlights a lot of my frustrations with Kawajiri’s earlier OVAs and films. Cyber City asks all these hard questions which Midnight Eye Gokû could have been asking – a private eye who is brought back from the dead and given a cybernetic implant which gives him near-omnipotence is actually a pretty good natural concept to explore a lot of these questions – but just didn’t. Kawajiri seemed hamstrung by something with Gokû. It might have been, perhaps, immaturity on his part. Possibly a fascination with æsthetics over substance, or perhaps an adolescent drive to show off as much female T&A as possible. But enough of my griping on that point. More should be said about how Oedo is awesome. 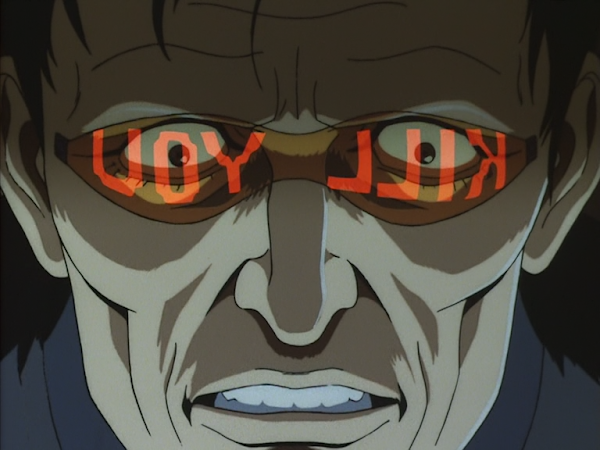 By the time the 90s rolled around, it looks like Kawajiri really hit his stride. Cyber City Oedo 808 has all of Kawajiri’s trademark style – including the monologuing heroes, the morally-ambiguous universe, the high-contrast electric lighting doused everywhere in blue, the high-tech glittering cityscapes and freeways, a veritable bevy of femmes fatales, plenty of splatter and body horror. But far more so than Wicked City or Midnight Eye Gokû, Oedo is just plain fun.

Kawajiri leads us by chase, crash and explosion around his far-futuristic cityscape with its gyro-stabilised spacescrapers, space elevators, military proving grounds a thousand feet up, superhighways in the sky… but also sewers, hacker lairs, underground chop shops, organ smuggling rings and experimental ‘hospitals’… with clear and unabashed glee. And actually, despite being murderers and robbers and ne’er-do-wells of various sorts, the three protagonists of Oedo actually manage to be way more sympathetic than Gokû or even Taki, thus investing us much more in the world they inhabit. Oedo is cyberpunk done right. Even the name of Cyber City Oedo 808 is an elaborate, multi-layered pun. The pronunciation of Oedo is also a play on the English number oh-eight. And Oedo is, in fact, a reference to the Edo period, and there are a couple of references to Edo culture at work – including the practice of using hardened convicts in police work and the police batons (or jitte) that our main protagonists use. It’s perhaps somewhat prescient that Kawajiri saw the accumulation of power, prestige and wealth in the hands of a tiny technological élite as a sign that the world would be returning to something like feudalism. As a side note: now I know where Battle Royale II: Requiem got the idea for the exploding collars. 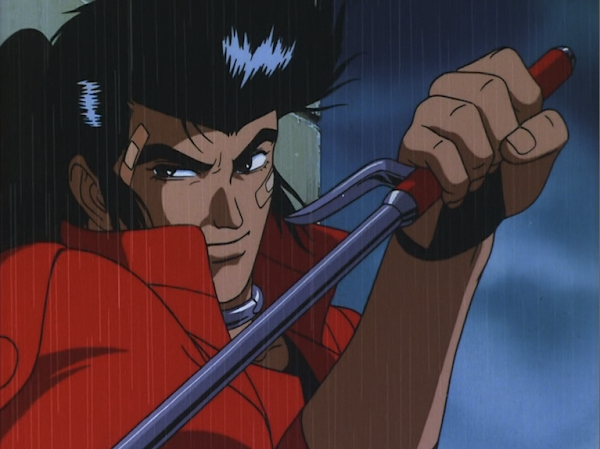 The three main characters of Cyber City Oedo 808 are the three convicts who get basically a long-shot chance at parole if they indenture themselves to the Cyber Police – basically the high-tech division of the Japanese police who deal with dangerous criminals in hard-to-reach places. First of all we’ve got Sengoku Shunsuke, who of the three is at once the most familiar (being based on the same Japanese manly-man template that produced Taki and Gokû) and least well-fleshed character. We get the impression he was kind of a thug before being imprisoned, but now he’s more of the laid-back, irreverent, smooth-talking type, who takes a passing interest in one of his more straight-and-narrow fellow police. Next we have Rikiya ‘Goggles’ Gabimaru, a laconic mohawk-rocking hacker from Shanghai (but of mostly African-American background, it appears) who also punches well above his weight class, and has a history of teaming up with sultry black-haired data thieves. And the third up is Yamagawa ‘Benten’ Merrill, a light-footed, white-haired bishônen with a knack for using thin ductile wire-blades and a taste for dangerous women. They are assisted by a police droid named VARSUS, who evidently primarily exists for comic relief.

Each of the three episodes focusses around each character in turn, and we get to see their motivations and backstories in bits and pieces throughout the OVA series. Shunsuke’s episode pits him against a hacker who is holding an entire spacescraper hostage in exchange for the life of his rival, but who is actually supposed to be dead. Goggles’s episode explores the rivalry between the police and the military, and pits him against a supersoldier cyborg with psionic abilities. Benten’s episode explores the desires of the techno-elite to cheat death and live forever, and the utter ruthlessness with which they pursue this goal. At stake is the fate of a young woman whose involvement in the experiment has turned her into a genetically-modified vampire. 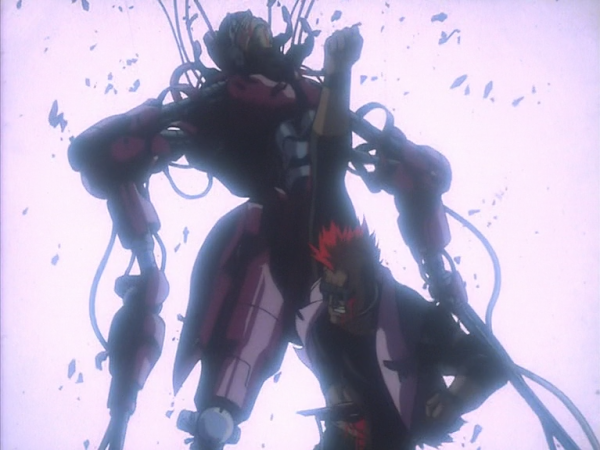 So, yeah: it’s an early Madhouse original concept. And therefore it simply oozes cool. You have production values that are amazing and animation quality that is high – and the writing and animation teams are not afraid to push the envelope in other ways. But there’s an admirable degree of restraint in Cyber City both in terms of the pitch and in terms of the storytelling, which is not something you’d normally associate with a project with Kawajiri’s name attached to it that started in the late 80s.

Kawajiri, who is no longer playing up the shock value as much, is therefore freer to play around with deeper thematics. He gets to toy around with the classic cyberpunk question of: where is the dividing line between machine and human? But he also gets to pose both SFnal questions and classical questions of the humanities like: Where is the line between private revenge and public justice? How far are we willing to sacrifice rule of law in the name of public order? What place will there be in a future of alienated nomadic computerised loners for things like family or home – or loyalty to a professional or sexual partner? What does humanity even mean when personalities can be stored in a computer after death, or when people with terminal diseases can be cryogenically frozen and thawed after three hundred years? 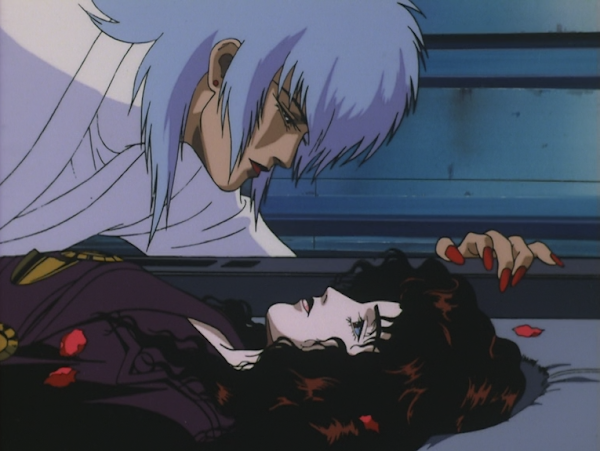 There’s a definite ‘high / low’ distinction that gets explored in the world these police act in. These heights and depths are explored quite literally in this world, and we get to see fun SFnal worldbuilding elements like how the towers are stabilised or how the security on the space elevator works (or fails to). The plots and schemes of the villains of each OVA episode are actually remarkably well-grounded… and in some ways they anticipate the villainy of people like Jeffrey Epstein, the people behind MKUltra (before the details were popularly known, of course) or the elderly rich who inject teenage blood for adrenochrome, if that’s a hypothesis you’re inclined to. Kawajiri clearly isn’t afraid to weave intricate webs of conspiracy among the shadowy élite class of the world he builds, and his fairly overt jabs at militarism, nationalism and scientism in the second OVA are particularly interesting to see. (Mashiba, who oversees the super-soldier project, is prominently shown in military uniform, flanked by two dragons with the Japanese flag flying prominently behind him.)

Cyber City Oedo 808 never managed to be as popular as Akira or Ghost in the Shell or Bubblegum Crisis, but it did garner a pretty significant cult following in the years following its release. For good reason, I feel. It’s a much more polished production than MEG, has characters that you actually come to sympathise with a bit, and actually has some decent food for thought on offer. Kawajiri definitely scored a hit with this one. 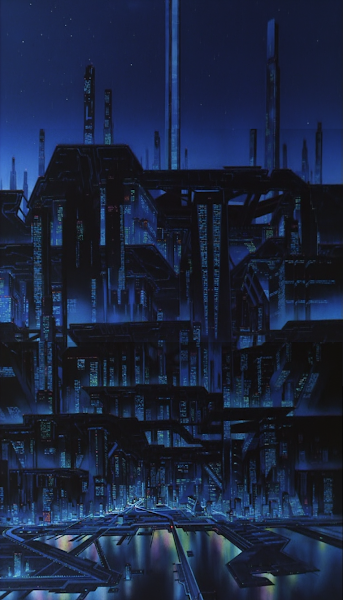