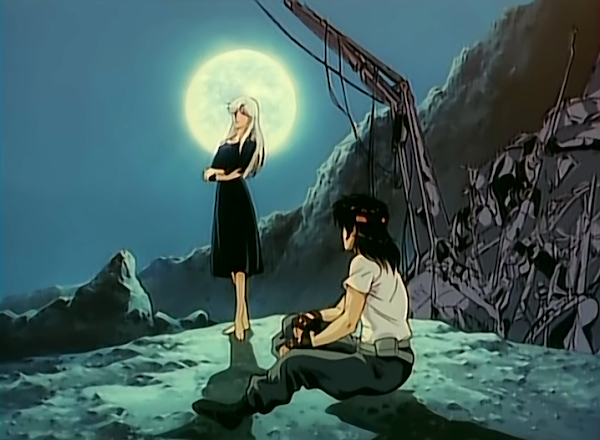 While I was teaching in China, one of the anime that I most thoroughly enjoyed watching was the beautiful, melancholic masterpiece Kino’s Journey. Kino’s Journey, the story of a fifteen-year-old girl who wanders around the world with her talking motorcycle, manages to be a surprisingly profound meditation on beauty-in-brokenness and the human condition. When I mentioned to a friend (I think it may have been Rob K) that I’d enjoyed Kino’s Journey, he promptly agreed with me and recommended that I watch A Wind Named Amnesia, an earlier animated film that explores similar themes, directed by Yamazaki Kazuo (Maison Ikkoku series 1). I finally did get around to watching A Wind Named Amnesia recently. And although I still prefer Kino’s Journey as having better execution and a better grasp of the philosophical themes, I can certainly understand the connexion he made between these two titles, and I enjoyed this film for the same reasons.

A Wind Named Amnesia centres on Wataru, a boy who wanders around in a Jeep, exploring the post-apocalyptic remains of America. Two years prior, a gust of wind travelled around the world which wiped away all human memories, abilities and capacity for speech, reverting all of humanity to a kind of primitive infancy. Wataru appears to be the only one left capable of speech until, in San Francisco, he meets Sophia, who helps him survive an encounter with a berserk ‘guardian’ SFPD mech. Sophia asks Wataru to take her to New York, and he agrees. Sophia doesn’t say much about herself, but Wataru reveals that he was living in Montana at the time the amnesia wind blew, and that afterwards he wandered into a military bioresearch unit and encountered an ‘enhanced’ youngster named Johnny who didn’t lose his memories. Johnny took Wataru under his wing and began teaching him language and other forms of knowledge, before dying at a young age because of the brain surgery he underwent. 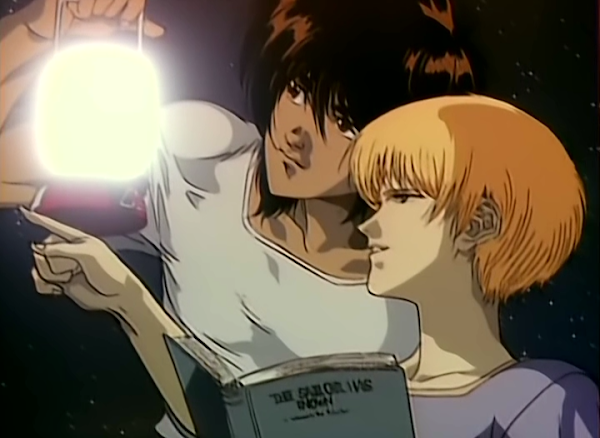 On their way from San Francisco to New York, Wataru and Sophia encounter several different human cultures which have emerged from the post-apocalyptic wreckage of the amnesia wind. In one culture, the humans have set up a construction-demolition robot as a wrathful god in need of appeasement by sacrifice. In another culture, a supercomputer has attempted to preserve humanity by ‘programming’ the last two inhabitants of its city to play different social roles. As Wataru interacts with these cultures and wonders about the potentials of humanity, Sophia makes a bet with him, wagering humanity’s memories against whether or not Wataru can get one other person to make the journey with him. It soon becomes clear that Sophia knows much more about the amnesia wind than she lets on…

Even the names of Sophia and Wataru are meaningful. In the film, Wataru explains that his name (from the Japanese wataru 渡るor亘る) was given to him by Johnny and means ‘to go from place to place’. Sophia, of course, is derived from the Greek word σοφῐ́ᾱ for ‘wisdom’, as in Agia Sophia; this is a name rich with symbolic and mystical significance. This name is both apt, given that Sophia has a deep level of knowledge about the world and about human motivations… and also ironic, given Sophia’s connexion to the forces that caused the amnesia wind. 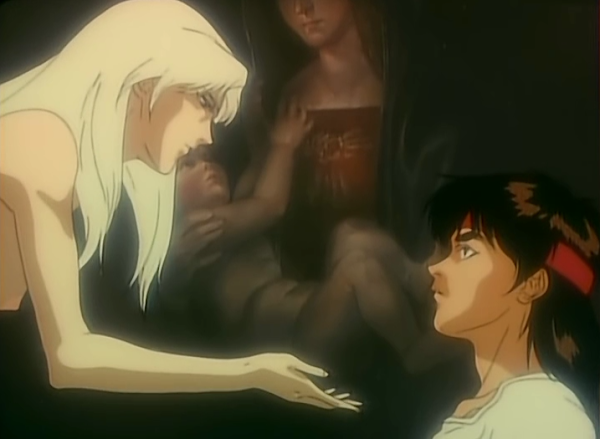 The destinations visited by Sophia and Wataru each explore different aspects of human nature. In the remains of Los Angeles they encounter a girl, Sue, who is about to be sacrificed to a ‘god’ – actually a construction mech – to appease its anger. Her father, Little John, tries to protect her from this fate. Wataru intervenes and tries to help Sue and her father escape, but Sue ultimately decides to go back willingly to be sacrificed. This segment explores both the destructive and the kenotic sides of the human religious impulse, and casts questions on the origins and purpose of religion.

They also visit ‘Eternal City’, a government-designed utopia run by a supercomputer. The last two inhabitants, Lisa and Mr Simpson, are programmed to act out the roles of various different people who used to live there. The supercomputer also wants to make Sophia and Wataru into such ‘citizens’, but they refuse, and manage to convince the supercomputer to let Lisa decide her fate for herself. This segment explores not only the problems of technology outstripping human wisdom, but also the question of whether or not human beings will choose free will over a controlled happiness. 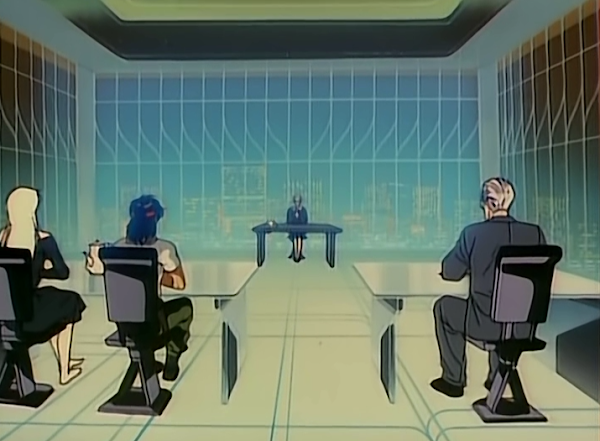 Even Wataru’s backstory gently probes certain perennial philosophical questions. When Wataru is first struck by the amnesia wind, he is basically a starving feral animal, fighting over food and even stealing it from younger children. But when he sees himself in a mirror he experiences the first stirrings of ethical awareness. Later, when he encounters Johnny as he is fighting a crazed test subject with psychokinetic abilities, he instinctively helps the weaker Johnny. Ultimately A Wind Named Amnesia is agnostic on the question of whether or not human beings are innately altruistic or innately selfish. But Wataru’s backstory does elicit some of the questions about human nature that Mencius and Xunzi disagreed on in Chinese antiquity, as well as Augustine, Cassian and Pelagius in Western late antiquity.

As can be seen here, A Wind Named Amnesia actually does effectively pose these thoughtful questions, even if the answers it presents feel frustratingly incomplete. Wind explores a Hobbesian version of the ‘state of nature’; it tries to look at and analyse the psychological roots of human morality; it poses the classic SFnal doubts about humanity’s relationship to technology; and it obliquely asks if human wisdom will ever be able to catch up with civilisation’s capacity for destruction. This is not surprising, since it’s based on a novel by Kikuchi Hideyuki, Kawajiri Yoshiaki is one of the screenwriters and Rintarô is a supervisor. 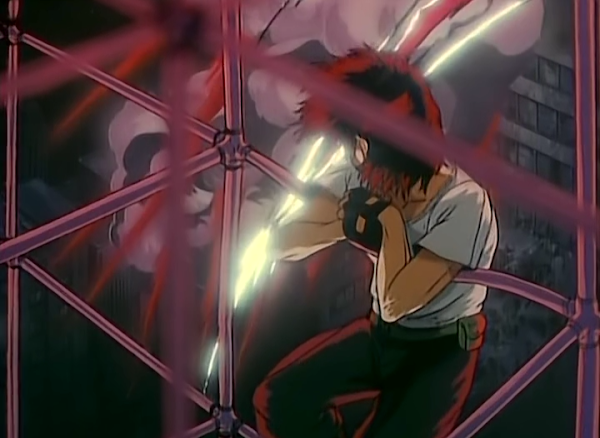 But… the film also has some fairly glaring flaws which detract from its full potential. Its SFnal conceit is quite frankly brilliant, but it’s overly ambitious for an 80-minute feature film. These various ‘stops’ made by Wataru and Sophia feel like they would be better structured as episodes in a miniseries – a lesson which Kino’s Journey took to heart. Having Kino and Hermes spend an episode in each place they visit allows them to more effectively pose and explore the relevant philosophical questions. As a result of its choice of structure, A Wind Named Amnesia feels overstuffed, and the ending in particular feels rushed, abrupt and unsatisfying. The artwork is slightly disappointing when compared with other Madhouse features. It’s actually rather reminiscent of M-66, the Appleseed OVA and Gunnm. The character designs seem to be in that late 80s-early 90s transitional stage with simplified angular facial features and unfinished ‘sketchy’-looking inkwork. But the set pieces are remarkably well-done, showing a post-apocalyptic America with its landmarks, landscapes and abandoned skyscrapers. The musical score is sparse and subdued, almost minimalistic – very suitable for the genre and the general tone of the film. It features some of the standard 80s movie-soundtrack synth numbers for action scenes, but even these blend seamlessly into the composition.

A Wind Named Amnesia is far from perfect. But it’s a film with heart, and one of those films that leaves you thinking long after it’s over. The great thing about it is that it doesn’t lead the viewers to any specific conclusions. Even humanity’s ultimate fate is left undetermined by the ending. It’s easy to see how A Wind Named Amnesia served as an inspiration for Kino’s Journey, even if its ambitions do in the end overstep its technical and storytelling limitations. 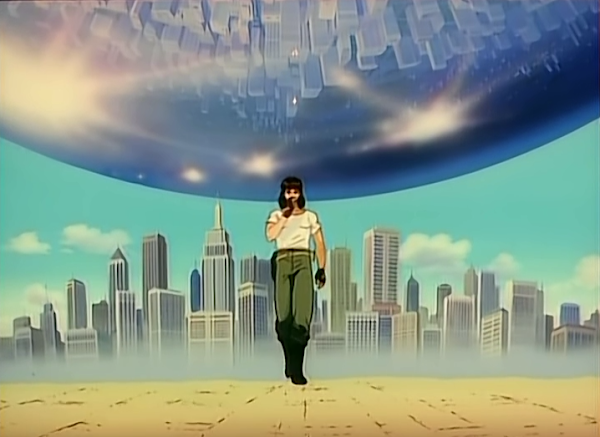