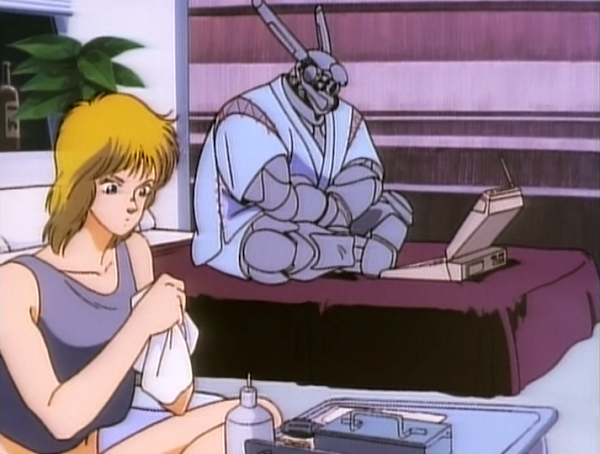 If there’s one thing that fans of Japanese cyberpunk seem to agree on, it’s that Shirow Masamune’s Appleseed manga is far superior to any of its animated adaptations that have come out since. The iconic status of Deunan Knute and Briareos Hecatonchires in the cyberpunk mythos are practically unmatched except possibly in the West by Neo and Morpheus in The Matrix. And yet one of the things that fans of the manga like to point out is that all of the animated adaptations – including the 1988 OVA and the 2004 feature film and its sequels – fail to do justice to the source material. Full disclosure: I’ve picked up and thumbed through some of the Appleseed manga, but haven’t sat down and read it all the way through. So even though I wasn’t going into the 1988 OVA dead cold, and already had some notion of what to expect from the setting and characters, I still don’t pretend to be versed in Appleseed lore. I was also watching it and preparing to be disappointed.

My take, starting from said low expectations, is that it’s okay in the same way that the new Star Wars movies are okay. Though there are some occasional touches of the cyberpunk ethos – mostly in the backstory of the main villain – there’s not really that much of the disorientation, the philosophical questioning and the high-tech-low-life exploration of the human condition under late capitalism that you see in other signature cyberpunk works (including Shirow Masamune’s manga). The storyline is bare-bones. There are no real plot twists. And it takes way longer than it ought to for us to start sympathising with Deunan and Briareos, who are kind of foisted on us at the beginning as sort of generic cops.

Once the story gets going a bit, the chemistry of these two actually reminds me a bit of Kate Monday and George Frankly from the contemporary CTW show Mathnet. (Deunan’s character design in the OVA, by the way, actually does resemble a young Beverly Leech.) That shouldn’t be surprising, since those two are a pastiche on Dragnet’s Joe Friday and Frank Smith, who essentially set up the template for buddy-cop movies, and that’s basically what the Appleseed OVA is here: a paint-by-numbers buddy-cop flick with power armour and cybernetics. It’s a fairly straightforward story about a cop gone bad whom the two protags – the straight-shooting Deunan and her more laidback cyborg partner Briareos – have to team up and take down. Maybe Katayama was trying to cash in on the popularity of Lethal Weapon…? 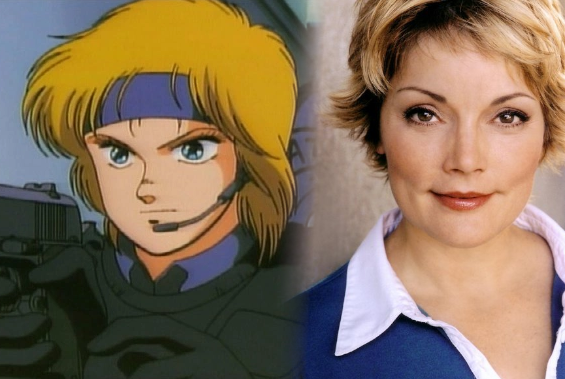 The story goes like this: it’s half past the future, most of humanity has been wiped out in a conventional world war, and a group of cybernetic organisms called ‘bioroids’ have set up a quasi-utopian colony called Olympus in order to restore world peace. The governing body of Olympus have created a special tactical unit for enforcing the peace (of which Deunan and Briareos are members), which seems kind of redundant since most of the security functions of Olympus are automated and handled by an AI called Gaia. In any event, one tactical officer, Calon, loses his wife Freyja to depression and suicide, and begins to question the utopian pretensions of Olympus and the possibility of human freedom under government by bioroids. Still working within the police, Calon tries to take Olympus down with the help of ‘freelance terrorist’ AJ Sebastian. When AJ kills a cop in Deunan’s unit, it’s up to Deunan and Briareos to stop Calon’s plan to deliver Olympus’s deadliest weapon into the hands of its enemies. This is basically all set up in the first fifteen minutes of the OVA.

The set designs and the mechas are pretty well-drawn; the actual human characters a bit less so, being pretty much bog standard in 80s anime terms. The animation is decent and the action sequences are fairly well-paced – which you would expect from an OVA like this. The classical Greek and the ancient Ægyptian influences on the architecture of Olympus (the latter likely by way of Blade Runner) are particularly notable, and there is, at least æsthetically, a nice juxtaposition of utopian high modernism with the neon-and-rubble patterns of urban decay and destruction. It’s always fun seeing a futurist vision with big, bulky, square electronic motifs – for example, the videophones that the characters all use. The soundtrack is another thing that reminded me of Mathnet, in particular the synthesizer- and saxophone-heavy easy-listening parts of the score. You also have your 80s J-rock / hard-rock segments as well for the action scenes, which adds to the charm.

One of the fun things about the OVA – at least for me, because I’ve got that ironic streak – is the prominence of what appears to be completely unironic Engrish. A suspect in police records will have a ‘Piace of Birth’, but a ‘Past as Indistinct’. Deunan’s and Briareos’s retro convertible (because how else are you going to visit a drive-in fast-food joint?) has a big brand logo on the back of ‘STOP’ and a ’23 ARMYS’ window sticker. Off-duty cops from the ‘Olumpus’ Police Department hang out at the ‘Onimal Coffee House’, until they have to scramble for the ‘RED ALART’. Such little things are enough to bring a smile to my face, I must admit.

Long story short: if your expectations aren’t too high, and if you approach it as you would a brainless action flick or a mid-budget Hong Kong cop drama, you’ll likely find the Appleseed OVA enjoyable enough. It’s got enough of Shirow Masamune’s design touch, at least in the non-human characters and mechas and set pieces, to carry a bit of the original’s charm. But if you’re looking for a faithful adaptation of the manga… well, this ain’t it, and neither is the 2004 remake. The cover is pretty badass, though. 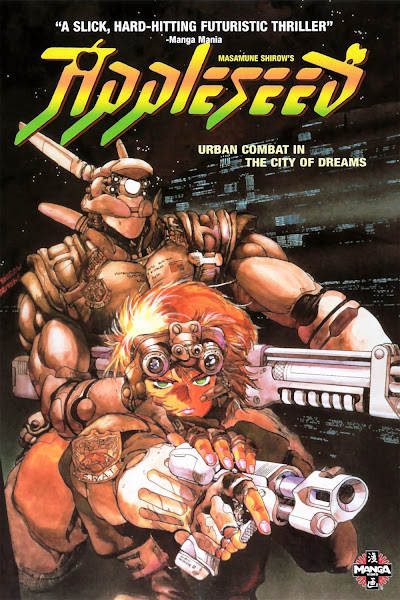