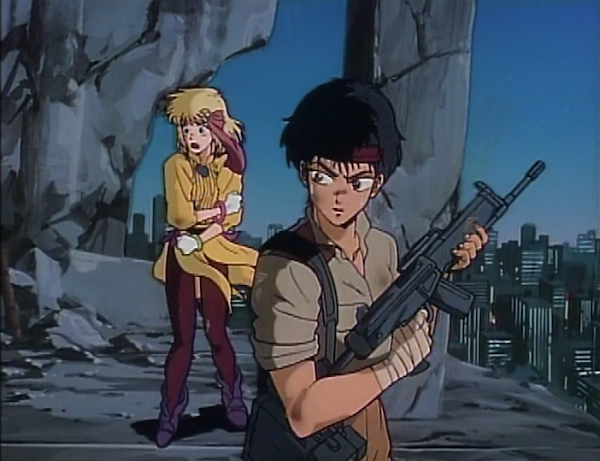 In my review of the Appleseed OVA I rather coyly suggested that the basic storyline was an attempt to cash in on the success of Lethal Weapon. That was because I hadn’t seen Shirow Masamune’s anime debut film Black Magic M-66 yet. Now, I want to clarify (again) that I am not familiar with the plot of the manga, and that the anime should stand on its own. So I’m just going to come right out and say it: M-66 is such a blatant and shameless cookie-cutter clone of Predator and The Terminator that it’s barely even worth summarising the basic contours of the story.

A military helicopter crashes – supposedly by accident – in the middle of the jungle; and its cargo, two experimental military assassination androids, are set loose. They have been programmed with an assassination target: Ferris, the granddaughter of the robotics engineer that created them in the first place. While the military tries to set up a cordon in the woods to capture the two rogue androids, they discover that the girl has become a target. But the only person who can save her is a reckless and unconventional freelance photojournalist named Sybel. Sybel, Ferris and the M-66 android thus become embroiled in a deadly high-stakes chase that takes them from the jungle into a glittering metropolis.

And, yeah, that’s basically it. No frills, just pretty much a straightforward SFnal-action shoot-‘em-up. Without spoiling it too much: there is a little bit of a plot twist on how the robots came to acquire their target and why they were released in the first place. That twist could have been interesting if it were played with a little more. As it is, though, it feels rather inconsequential and tacked on, as it’s mostly told to us in exposition and it’s mostly resolved by lampshading it in Sybel’s closing monologue.

For what it is, M-66 is… competent. I can’t really say much more about it than that. The storyline, which – again – doesn’t really score any points for originality of concept or even that much for characterisation, is fairly front-loaded in the sense that you get a lot of expositional dialogue and monologue dropped on you in the first twenty or so minutes without a lot of build-up. The suspense only really starts to build, once a pair of hapless hikers happens across a bear that has been eviscerated by one of the androids, and are in turn hunted down by them. (Wisely, the androids are not shown here.)

M-66 keeps up the dramatic tension but doesn’t really elaborate on it, and some of Sybel’s and the military’s gambits only really ‘work’ if you don’t think about them too hard. The attack on the lead engineer’s house and Sybel’s discovery of the aftermath are likewise handled well. The fight scenes between the military and the androids are well-drawn and competently-animated. However, a lot of the SFnal elements are either not explained or make no sense. For example: how can a single robot which takes out an entire convoy and causes all the trucks to explode have so much trouble with two soldiers in a narrow hallway? Why do the net guns that the soldiers use to trap the first robot not work on the second one? And then why is that robot somehow afraid of a… purple Roomba? These things are neither explained very well nor shown very well. There are hints toward the end that the M-66 is running out of power or something, but that’s never very clearly explicated nor shown. 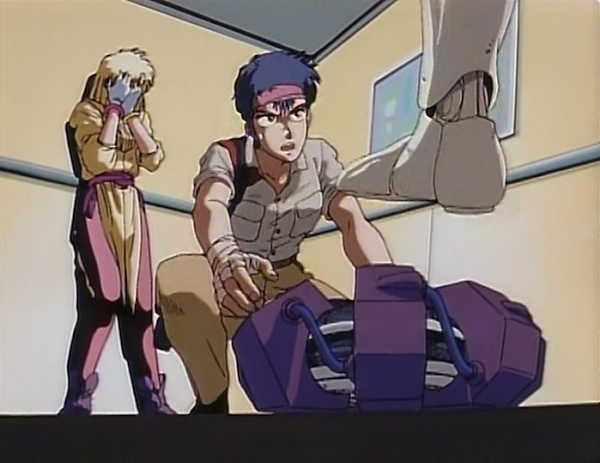 Yes, there actually is a purple Roomba.

The music is standard 80s action flick fare, which is to say: eminently listenable. Likewise: the character designs are competent – both the humans and the androids – but not spectacular. Sybel is the accidental Kyle Reese in the story, but in her short tank top and headband she gives off more definite Pvt Vazquez vibes from Aliens. Ferris, despite her role in the story, is no Sarah Connor. For the most part she comes off as kind of an irresponsible party girl, though she does grow on us a bit toward the end when she sticks up for Sybel against the military. Anyway, as I said above: if you’ve seen The Terminator then you’ve seen this movie. It’s probably just a better idea to go rewatch that. To put it lightly, M-66 may be Shirow Masamune’s first animated work, but it certainly isn’t his best.
Labels: 80s action cyberpunk OVA science fiction