This post was originally published at The Heavy Anglo Orthodox on 31 August 2017. 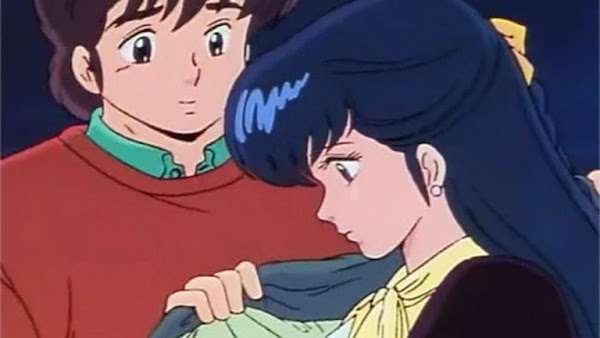 I started watching Maison Ikkoku 《めぞん一刻》 recently – an animated series adapted from one of Takahashi Rumiko’s 高橋留美子 earlier serialised works alongside Urusei Yatsura 《うる星やつら》. I had originally begun watching it because, as a fan of Takahashi-sensei’s work since middle school, I was feeling somewhat nostalgic – which is probably a bad reason to get back into anything. I also found I could justify it based on the farcical elements and situational humour, a bit like Fawlty Towers, except with the tenants rather than the management providing the awkward and embarrassing situations. It is also classified as a romantic comedy targetted at young men (seinen 青年), but it struck me as I was watching that it’s a romantic comedy in a very particular style. Maison Ikkoku belongs, albeit with a couple of satirical and dramatic twists added, in the late-Imperial Chinese popular genre of caizi jiaren 才子佳人, or ‘scholar-and-beauty’, plays and novels.

Caizi jiaren fiction was not high culture. Didacticism aside (a bit more on that later), caizi jiaren works were often condemned by Confucian moralists of a puritanical streak as lewd, unfilial, vulgar and otherwise unfit for wholesome minds. Occasionally they had good reason for thinking so; during the Ming Dynasty in particular, caizi jiaren fiction could be remarkably bawdy. It’s possible to make too much of this, though: similar allegations have been made by English-speaking Protestant moralists about theatrical performances and novels in general, as long as there have been either novels or theatres. But caizi jiaren, as a genre and a trope, was deeply influential on later Chinese high literature, most notably the great Qing-era novel Dream of the Red Chamber 《紅樓夢》.

The story of Maison Ikkoku, for those gentle readers not up on their 1980’s Japanese pop culture (and I wouldn’t blame them one bit), is as follows. A young student named Godai Yûsaku 五代裕作, after having flunked out of qualifying for his college entrance exams, and lives on his own on a shoestring budget in a ramshackle apartment building called Ikkokukan 一刻館. Surrounded by obnoxious and hard-partying neighbours (particularly his next-doors, the bizarre Mr Yotsuya 四谷, the sloshed Miss Roppongi 六本木, and the gossipy Mrs Ichinose 一之瀨) who think nothing of using his apartment as their ‘common room’, Yûsaku no sooner decides to move out than Ikkokukan comes under new management: that of the lovely young widow Otonashi Kyôko 音無響子, with whom he is instantly smitten – and decides to stay in his apartment while pursuing his studies. The subsequent story is basically one of Yûsaku attempting to pursue Kyôko and repeatedly falling on his face, often with the unwitting (or equally as likely, malicious) assistance of the aforementioned neighbours, who see his schoolboy puppy love as cause for amusement and mischief. In the meanwhile he struggles with his studies and part-time work, suffers from being broke, and fights off unwanted romantic entanglements and a rival suitor for Kyôko’s affections. The basic structure of Maison Ikkoku’s story strongly reflects that of the caizi jiaren template in a number of ways, and appears to deliberately subvert it in several places.

In the original works caizi jiaren drama and ‘light’ fiction, the ‘scholar’ and the ‘beauty’ are both only children of good families, and both have remarkable literary talents – one or both of them may be orphaned. The plot in caizi jiaren fiction usually starts with love-at-first-sight and is usually driven by the struggles of the ‘scholar’ and his attempts to pass the civil service examinations, or else by the distance between the lovers or the parents of one or the other young lovers who oppose the match. Ultimately what the ‘beauty’ wants in the end is for the man she loves to become worthy of her by attaining official rank or academic standing; therefore there is often a not-so-subtle didacticism at work in the story. A notable caizi jiaren play is the Yuan Dynasty work The Story of the West Wing 《西廂記》, which features all of these elements: Zhang Gong 張珙 as the scholar and Cui Yingying 崔鶯鶯 as the beauty; Yingying being raised alone by her widowed mother (who also doesn’t like Gong); Gong falling in love with Yingying at first sight; his having to court Yingying from a distance (in his case, through poetry); and lastly, his having to pass the civil service examination in the capital before he can marry Yingying. Another feature of The Story of the West Wing is the character Hongniang 紅娘 (‘matchmaker’, or more literally, ‘red girl’ or ‘red maid’), who serves as an informal support to the young lovers, encouraging them, deterring other suitors or in other subtle ways helping the scholar to win the beauty. Hongniang connives at an assignation between Gong and Yingying, to persuade Yingying’s mother to agree to the wedding. Hongniang’s name later became a byword for unsanctioned matchmakers of all sorts.

Maison Ikkoku’s plot follows most of the same beats – though again with a modern-day and slightly-satirical twist. Yûsaku is more of an ‘everyman’ than a ‘talented scholar’ (he starts off as a failed student who gets into a third-rate college with Kyôko’s assistance and encouragement), and much of the comedy derives from the ways in which his neighbours take advantage of him. However, he conforms to the caizi archetype not only in his studiousness and hard work. He is also kindly, fair-minded, decorous and painfully earnest. This being a comedy, these traits are exaggerated into indecision and naïveté. The modern take on the ‘orphan’ aspect (which would be even more unacceptable to the more puritanical strain of Confucianism) is that Kyôko herself is a widow whose father-in-law is the landowner of Ikkokukan: Kyôko still grieves over her husband’s death, and this also provides some of the dramatic tension. The ‘distance’ between the two characters arises primarily from the setting: the apartment-dwellers at Ikkokukan often prevent Yûsaku and Kyôko from spending time together. But the main driver of the plot is that Yûsaku has to grow up, has to graduate and has to earn his position before he can pursue his relationship with the landlady – and this is of course the major defining feature of caizi jiaren literature.

Maison Ikkoku even has a subverted Hongniang of sorts, in the barmaid Roppongi Akemi 六本木朱美, both whose name (Akemi 朱美 means ‘vermilion beauty’) and flaming red hair are some rather unsubtle dramatic hints at her rôle in bringing Yûsaku and Kyôko together. To begin with, Roppongi is basically ‘Noisy Neighbour № 6’: constantly-drunk, dishevelled and in a state of compromising undress, with no sense of modesty or personal space. But she does several things to aid Yûsaku in his romantic pursuits. When Kyôko’s wealthier suitor Mitaka Shun 三鷹瞬 shows up, Roppongi usually begins aggressively flirting with him and putting herself bodily between him and Kyôko – even though her reasons are apparently selfish. By the end of the series, she also helps Yûsaku definitively break it off with his own unwanted romantic interest, Nanao Kozue 七尾こずえ. She also eggs Kyôko on in several ways, such as threatening to seduce Yûsaku. At last, she calls Kyôko ‘pathetic’ to her face for pining after Yûsaku but not trusting him enough to get close. Kyôko, uh… finally takes the hint.

Now, not too much should be read into this analysis here. Maison Ikkoku can and should be enjoyed in its own right as a romantic comedy; it goes without saying that one doesn’t need to understand fourteenth-century Chinese theatre in order to get the humour. And Maison is far from being Takahashi Rumiko’s most overtly-Sinophile work; that particular honour may have to go to Ranma ½, her martial-arts rom-com which takes place partly in China and prominently features themes and stylistic elements adapted from Chinese mythology and drama. But I did find it interesting to note how Maison overlaps with a style of popular dramatic literature in mediæval and late Imperial China, in a way which showcases another level of subtle Sinophilia which runs in Takahashi’s work. 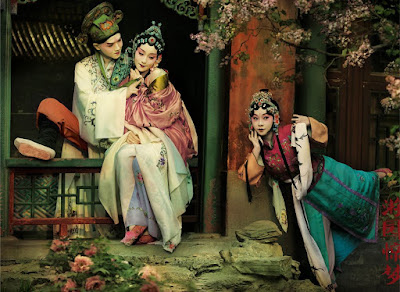