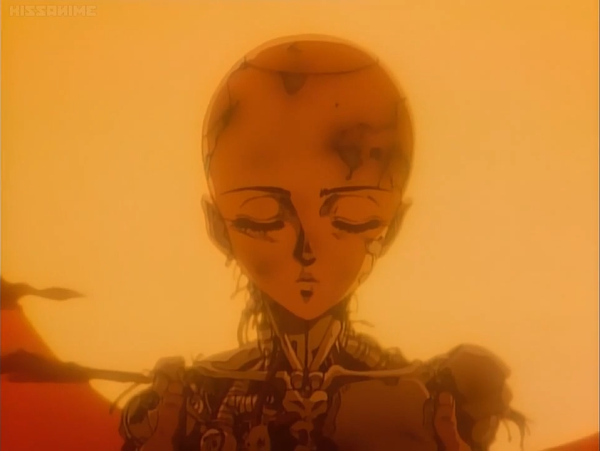 The two Chinese characters which make up the name stylised as Gunnm – chongmeng 铳梦 – literally mean ‘cannon dream’. It’s a play on words. The first Chinese cannons, or huochong, which surfaced during the Mongol Yuan Dynasty, were little more than bowl-mouthed pipes made of bronze. I’m not sure, personally, whether Kishiro Yukito had the English phrase of ‘pipe dream’ (also a fanciful Western allusion to the Mongol Yuan Dynasty) in mind when designing the bloody, cutthroat-capitalist, dog-eat-dog, postapocalyptic two-tiered scrap heap world that Gunnm takes place in… but it fits.

Ahem. Better known here as Battle Angel Alita, and a favourite among early anime and manga aficionados in the West – including, for example, Guillermo del Toro and James Cameron – the 1993 Gunnm OVA follows the story of Gally, a working-condition cyborg who has lost all memories of her previous existence when she is found, repaired and resuscitated by the eccentric cybernetics expert and bounty hunter Ido Daisuke. It’s largely through her eyes that we come to understand how the world works six hundred years into the future. 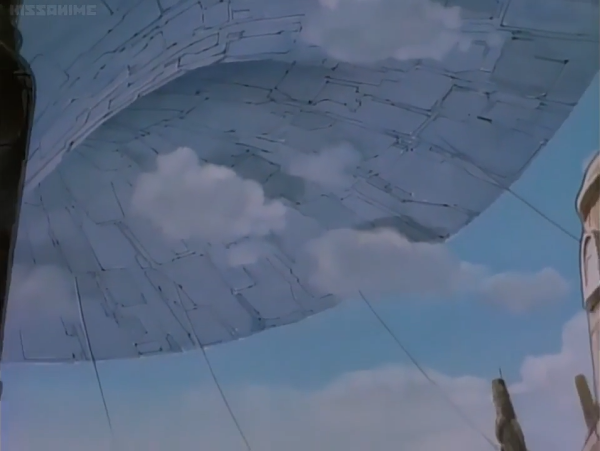 It’s a pretty grim vision. There is one realm, Zalem, which is literally a city in the air. Life there is good and its people live comfortably. They are connected to the lower realm, and in particular the central city Scrapheap, which serves as its source of raw resources and (as the name suggests) its literal waste dump, through the Factory, which is the last thing the lower realm has in place of either a government or a system of production. The Factory enforces the law – which is to say, the will of Zalem – by issuing bounties on criminal heads for credits. We soon learn that a harsh law carrying one of the highest bounties is building any kind of airborne vehicle – Zalem wants to keep the riff-raff out. The citizens of Zalem are, it is heavily hinted, blond and attractive, and marked by a small crescent moon symbol in the centre of their foreheads.

In Scrapheap, the law of the jungle prevails. The Factory is less interested in enforcing any kind of law and order than in making sure that the wealth is siphoned up to Zalem, so what law there is, is enforced by bounty hunters. That means that the streets get violent and bloody, and the enterprising and the ruthless will literally steal your organs and your spine if they can get away with it. But hey, there’s always a chance at getting a second-hand body built from the bits of metal scrap lying around, if you’ve got the credits to pay for it! 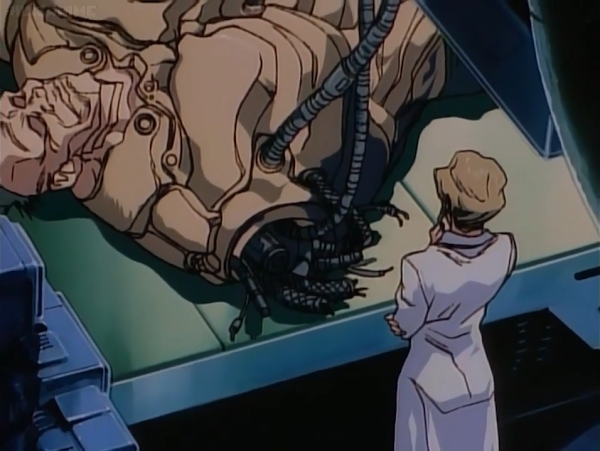 It’s hinted very early on that Ido Daisuke is a class traitor: he’s come down to Scrapheap of his own free will and works as a bounty hunter to try and give the poor some shot at justice, and uses his abilities in cybernetics to aid the less fortunate. But we get to see just how ineffective his one-man war against Zalem and its capitalist logic is through Gally’s eyes. Gally learns about Ido’s night-job as a bounty hunter and decides she wants to become one herself, to protect him and to help him. And it’s demonstrated clearly that the one thing she remembers how to do is fight. Ido’s not enthusiastic about the idea, but later concedes that Gally has the right to control her own destiny. A former Zalem citizen named Chiren, who wants Ido’s help getting back there but is coldly rejected, jealously rebuilds the criminal cyborg Grewcica specifically to kill Gally in order to hurt Ido – but it turns out Gally knows a few tricks about cybernetic martial arts that Chiren doesn’t.

Gally also falls in love with a human boy named Yugo, who was raised by his brother. His brother died at the hands of a bounty hunter, trying to build a flying machine to reach Zalem – and Yugo wants more than anything else to fulfil his brother’s dream… even if that means stealing other people’s body parts. He works for Vector, a bookie and a cybernetic battling profiteer who seems to have insider links to Zalem, and exploits those links in Scrapheap for his own profit. Gally doesn’t like this, and she decides to help Yugo get to Zalem on his own terms rather than Vector’s. However, Yugo’s organ-harvesting side business ultimately catches up to him, and as it turns out, Vector has never been completely on the level. 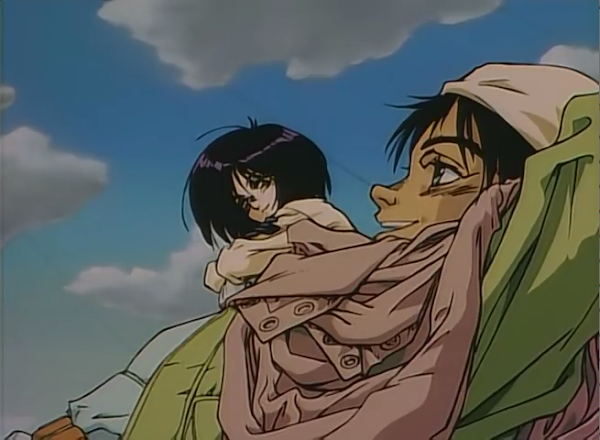 Contra Jon Landau (who produced the live-action film last year), this is not a ‘great story about a young woman's journey to self-discovery’. Although Gally does have to discover her past, as I mention above, that’s really only one part of the story. Though it looks like the film itself didn’t miss the point in the end, the OVA is about the literal mechanisms of oppression and exploitation. Getting to Zalem – the city in the sky of the capitalist class – is for literally everyone stuck in Scrapheap a ‘pipe dream’, but it’s a pipe dream that is actively fed by the Factory and by hustlers like Vector. The OVA shows us how this ‘pipe dream’ morally compromises the people who are chasing it, and how in the end it destroys the lives of those people. The message is pointing us to the fact that the economic system is designed to work like this, and that it is fundamentally wrong – not just poorly executed.

Now, Kishiro Yukito is on record as being a fan of the martial-arts manga of Takahashi Rumiko (Ranma ½, One Pound Gospel) as well as by Tomino Yoshiyuki’s anti-war mechanised war saga Mobile Suit Gundam. But we can see from Gunnm that his politics are in fact a quantum leap more radical than the creators of any of those franchises, even if he does occasionally retain the anti-war sentiments of Tomino, his characters have to fight as a result of the logic of the world they live in.

As far as the OVA goes: in terms of the quality of the drawing and the animation, it’s kind of riding the basic standard for the early nineties. The inkwork doesn’t have the same clean, bold black lines you find in productions from the eighties; already they are opting for a grittier, ‘sketchier’ look, with hatchwork standing in place of shading for the contours of the faces. The style fits the setting fairly well, though. There’s something of a disturbing disconnect between the cutesiness of some of the characters, and the hyper-violent gore that accompanies the work of the bounty hunters – but I believe this was a deliberate choice on the animators’ part. The voice acting is… passable. It’s not egregiously bad, but it’s nothing to really write home about either. But it is well worth it to watch the Gunnm OVA for the immersive worldbuilding, and the implicit criticism of capitalism as you watch it functioning through Gally’s cybernetic eyes. The best post-apocalyptic literature is never as much an attempt at doomsaying and prognostication as it is a way of pointedly holding up a mirror to the present. 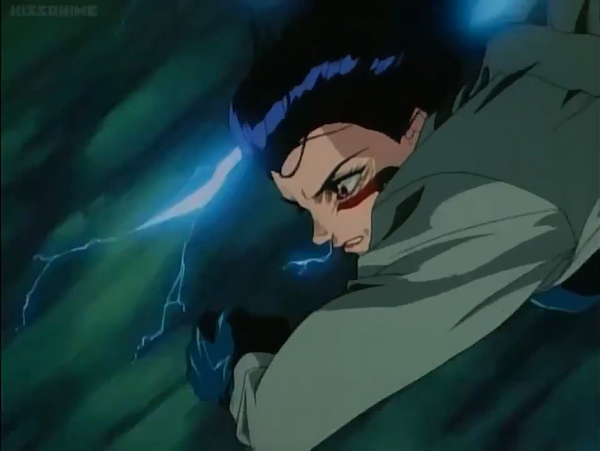