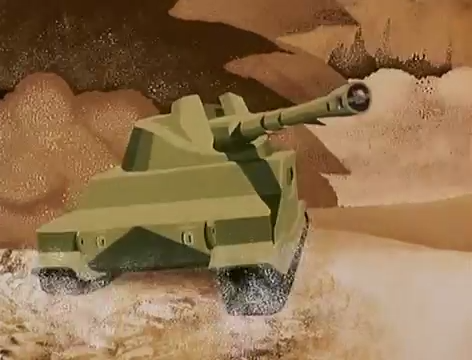 Just as with Chinese animation and Japanese animation, Soviet animation was an art form which was well ahead of its time and bristling with innovation. I’ve been focussing so far on the short pieces of one director, Vladimir Tarasov, whose work all has a very specific flavour to it: a set of beloved motifs and a very particular range of SFnal questions and thematic material. But he was only one director. Roman Kachanov, the man behind Cheburashka and Krokodil Gena, also tried his hand at science fictional animated pieces with his adaptation of Kir Bulychev’s Alisa Selezneva novels. But Polygon, directed by Anatolii Petrov and based off of a science fiction short story by SF Gansovskii, is another beast altogether. The art style is particularly innovative. But far from making a merely artistic statement, Petrov uses this æsthetic vehicle to deliver a profound anti-war and anti-imperialist statement, while also issuing an early warning about the use of autonomous weapons.

In Polygon, a military unit is testing a new weapon, a remote-operated tank that can anticipate enemy movements by reading biological signs of hostility or fear, on a remote island. This military unit belongs to an unspecified ‘great power’ which has just concluded an imperialist war in Africa. (Evidently the great power was supposed to be France, and the war in question was the war in Algeria – though this is not stated explicitly in the short. This interpretation is reinforced by the fact that Polygon’s main theme is basically ‘El Bimbo’.) This war claimed the life of the son of the scientist who designed the tank, and he harbours a desire to avenge his son’s death. After seeing the defensive capabilities of the self-guided tank in action, the impressed commander orders the scientist to turn on its offensive capabilities. The results are… exactly what you might predict. 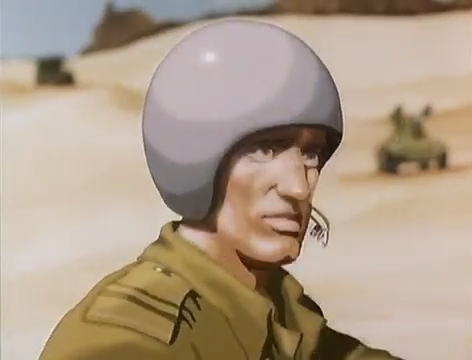 The anti-war and anti-imperialist positions that Petrov – and Gansovskii before him – stake out, are quite clear. The sheer brutal logic of the killing machine that is being tested, is the same as the logic of the generals when they discuss the sacrifice of the scientist’s son, or the need to restrain and disarm ‘the blacks’. The flashbacks where the scientist is remembering his son, and then reliving how he was killed, are done as sparingly in dialogue, and as movingly, as the similar flashbacks suffered by Heintz in ‘Magnetic Rose’.

And – not to spoil the ending – but the post-credits sequence, which takes place several years later, is quite profound as well, and reinforces the anti-imperialist dimension of the film’s prescient warning message. Despite this being merely a ten-minute short, there’s nearly as much to love about Polygon in terms of its wealth of psychological and political commentary, as in the similarly set-up Metal Skin Panic MADOX-01, and the more satirical Dominion and its sequel. I would not be at all surprised if the greats of Japanese animated science-fiction – Ôtomo Katsuhiro, Masamune Shirow, Suzuki Toshimichi, Anno Hideaki, Miyazaki Hayao – were looking directly to the Soviets and to Russian animators like Petrov for inspiration. 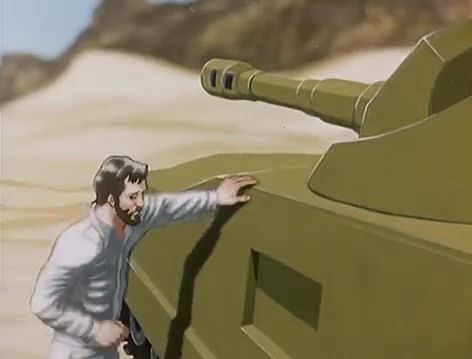 Polygon showcases the innovative edge of Soviet animation in a number of ways. It uses two cel layers for each character to create a three-dimensional effect, as well as a soft focus blur to create the effect of distance. As a result, the cels themselves look like oil paintings – an innovation which anticipated the much more ambitious full-length animation Loving Vincent in which every cel is itself a full canvas oil painting. What’s even more impressive is that this short was produced in 1977. In Polygon, this style – which Petrov seems to have taken and ran with throughout his career – allowed the artists to experiment with textures and highlights, giving the human characters and the backgrounds realistic features or even creating a dreamlike effect anticipating the Richard Linklater film Waking Life. The flat, boxy sides of the autonomous tank contrast instantly with the richly-lit, translucent, soft textures of the human faces. Also interesting is that the character designs themselves seem to be based on famous actors and entertainers of the time. We can clearly see the features of Yul Brynner, Ringo Starr, Paul Newman, Jean Gabin and Mel Ferrer here. Despite the richness of this use of oil painting-like depth, the animation, and particularly the human articulation, is fluid and credible, and lends the story a considerable degree of emotional weight.

I highly, highly recommend Polygon. If you haven’t seen it – see it now. Long story short: it’s a classic, and deservedly so. It’s a ‘serious’, adult-themed animation, and it doesn’t at all soft-pedal the casualties and the psychological realities of war. It clearly sympathises with the indigenous victims of imperialism over the perpetrators. And its warnings about the use of fully-autonomous robotic weapons platforms and how they can ‘go wrong’ remain remarkably prescient to the present day, in which killing by algorithm is still a subject for debate. 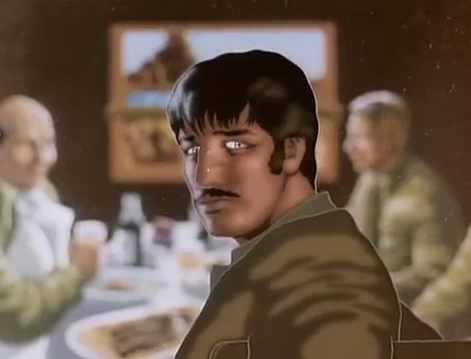