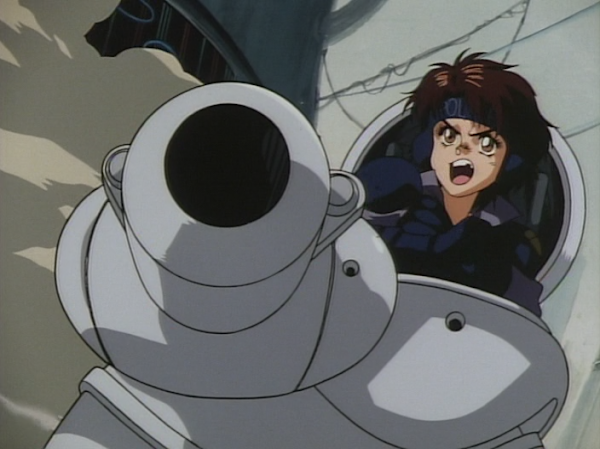 The second animated mini-series set in Shirow Masamune’s Newport, the 1993 OVA New Dominion Tank Police, is a bit more uneven in quality than its predecessor, but in other ways it’s a masterful exploration of the Dominion-verse. Although the animation is technically much more competent, New Dominion Tank Police only occasionally approaches the brooding post-apocalyptic atmospherics and the heights of absurdist black humour that the first OVA did. The moral ambiguity surrounding the existence of the Tank Police as a whole is gone, though it has been replaced with an incisive moral criticism against big corporations. If Dominion Tank Police was a completely off-the-wall commentary on police militarisation and œconomic inequality, then New Dominion Tank Police is a less (but only slightly less!) off-the-wall – and surprisingly sophisticated – commentary on unmanned warfare (before drones!), IR theory and the self-serving conflicts between global capital and nationalism. Even if the series ends on a note of unapologetic Dirty Harry-style vigilantism, the series is set up to make you cheer for it.

The first thing to say about New Dominion Tank Police is that it went straight from 80s hair metal stylings to 90s mainstream-ish hard rock without looking back, both in terms of its art direction and in terms of its musical accompaniment. Leona went from redhead to brunette, and the Puma sisters went from blonde to redhead for this adaptation. Most of the character designs, though still recognisable, were significantly redrawn. The drawing style is at once a lot cleaner and a lot less expressive than in the original Dominion Tank Police. Although the carapace-like architectural style for Newport is still there, and although the bacterial cloud and the sewer crawl that were major plot devices in the first OVA are still there, their importance is downplayed significantly. The palette is a lot less gloomy atmospheric red against glaring neon blue, and a lot more tones of gunmetal grey. The soundtrack is still catchy, albeit in a different way: this is very much 90s J-rock rather than 80s J-rock.

The cast of characters – the Chief, Britain (now called Brenten in the subs), Osaki Leona and Al, the Puma sisters – are all the same as in the first Dominion Tank Police, and the story is evidently set several years later. By this time, Leona’s ‘Johnny Rico transformation’ is complete. She has successfully graduated from being a sweet, shy, slightly-unsure motorcycle cop into one of the swaggering, stamping, trigger-happy and psychotically-violent Tank Police – and in some instances she’s even more enthusiastic than Brenten about causing massive collateral damage and property destruction in the name of stomping out crime. On the whole, though, the Tank Police are under orders from the mayor of Newport, Ms Weatherbee, to tune it the hell down. (Street protests against the Tank Police are now commonplace and gaining popularity. Who’da thunk?) So here we get to see a Tank Police unit that is (mostly) taking their duties to protect the public seriously, and actually trying to do the right thing… even if the insurance claims and written complaints still continue to flood the Chief’s desk. So, not to worry: there’s still more than enough torn asphalt, tank chases, strafing runs, demolition and explosions to go around. 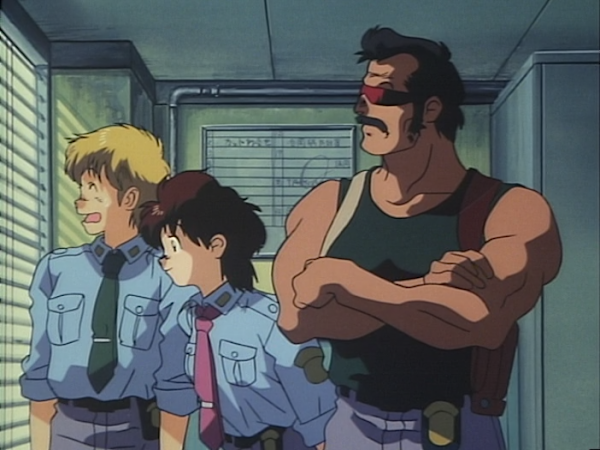 Several interconnected plotlines confront the Tank Police. A municipal weapons ban proposed by Mayor Weatherbee threatens to shut down the operations of the world’s biggest arms manufacturer, Dainippon Giken. As if in response to this, a rash of crimes are committed which seemingly target the mayor, the competitors of Dainippon Giken, and the police. A policewoman – Sharon, one of Leona’s friends from her motorcycle days – is mysteriously murdered. (Even more strangely, the Puma sisters have a change of heart and decide to start helping the Tank Police! What’s the world coming to?!) Highly sophisticated and manœuvrable autonomous weapons platforms begin appearing in the underground of Newport, which perpetrate a massive prison break. An automated freight truck carrying tonnes of explosives goes out of control and heads straight for downtown Newport. Various strings of this criminal conspiracy implicate Dainippon Giken, but there’s little proof… and, of course, within the boardrooms of business conglomerates there are also wheels within wheels. It’s up to Al, Leona and the Tank Police to use their brand of Leeroy Jenkins-style justice to bring the bad guys to heel… and for Leona, this time the stakes are personal.

One of the differences between NDTP and the first OVA is that, whereas in the first OVA the deliberate ambiguities between cop and robber and private for-profit security force were anarchically played with for both comic and serious effect, here Shirow (or at least his directorial interpreter here, Furuse Noboru) is trying to draw distinctions between bad and worse. He understands where the escalation of force between criminals and police tends to lead. And he presciently predicts that unmanned weapons, remote-control drones and AI platforms will lead to drastic new escalations in how crimes are committed and how police will retaliate. The real criminals won’t be gangsters like Buaku, or enforcers like Anna and Unni Puma who here serve mainly as mild fanservice and comic relief; they will be impeccable men in business suits who wouldn’t dare dirty their hands by firing guns themselves. And the weapons themselves will be tracked by monitor, remote-controlled from well-appointed houses in the suburbs. 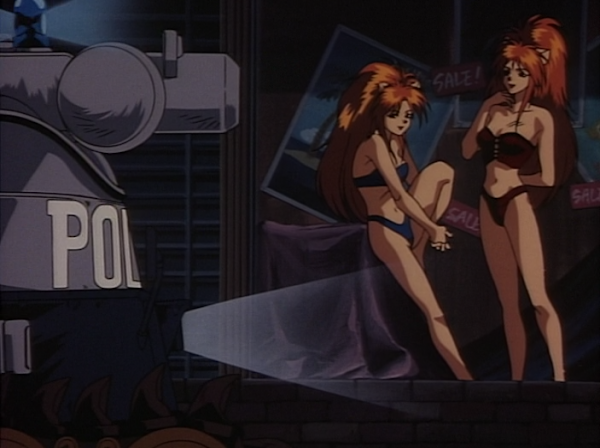 One of the reasons we are made to root for the Tank Police here, despite their previous moral ambiguity and willingness to do heinous things like gleefully commit torture on suspects, is that – even if they do tonnes of collateral damage in the process – at least they are willing to put their bodies on the line. Despite her newfound swagger, Leona is still human and vulnerable, with friendships (Sharon, Brenten, the Chief) and romantic interests (Al – sort of) that she is willing to put her own body at risk for. The same with Brenten and Al, both of whom put themselves literally in harm’s way to save Leona when she runs the risk of being killed by the run-amok explosives truck or by the automatic weapons platforms. Even the Chief of the Tank Police dares to be vulnerable by putting himself bodily next to the Mayor when she is at risk of being assassinated by the arms manufacturing corporations. On the other hand, among the major criminals, most of them don’t fire a gun even once, appear only from behind the other end of a video screen or behind a blacked-out limousine window, or don’t even show their faces at all (meeting as they do in a dark boardroom). There is a certain level of solidarity that the Tank Police share with even the people of Newport that they terrorise, that the major corporate and international criminals simply do not. If there is one message that Shirow and Furuse seem to want us to take away from this, it’s that the line has to be drawn somewhere. That’s one reason why the Tank Police – who were previously at odds with the mayor over the weapons ban – stake their lives and what little is left of their reputations trying to protect her.

There is another dimension to the New Dominion Tank Police which rates a mention here, and that is its take on the contradictions between a global liberalism and a resurgent nationalism, which now also seems eerily relevant. Though for much of the series, the Big Bad appears to be the arms manufacturer Dainippon Giken, it turns out that even Dainippon Giken was being manipulated internally by agents of the Rockford Corporation – run by white people from a supposedly Anglophone country, and operating out of that country’s embassy. Rockford’s entire aim was to use Dainippon’s criminal activities to blackmail certain members of its board into resigning, so that it could effect a leveraged buyout and corner the global arms market. Rockford executives boast that they own controlling stakes in 20% of the countries of the UN, and they hide all of their operations behind their host country’s diplomats. Rockford’s agents notably use the language of liberalism – free trade, property rights and the international rule of law – to protect their company’s profits and stage hostile takeovers. But it’s clear that when it comes to the law in the countries they operate in, they do not care at all, and are more than happy to stage prison breaks, effect coups d’état, order drone strikes and assassinate political leaders (or police) who stand in their way. 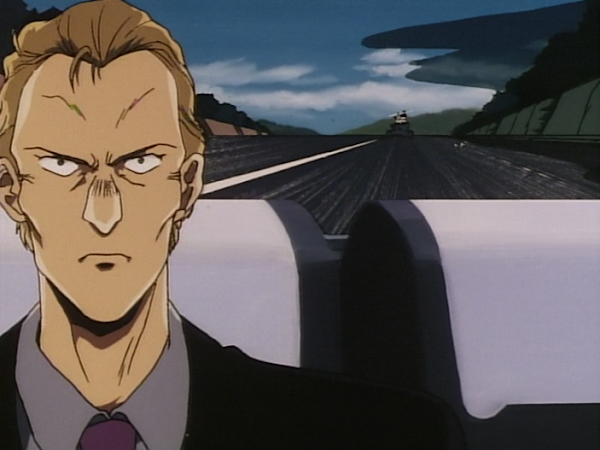 What is noteworthy, though, is that even while NDTP seems to be saying that the globalism of Rockford and the Anglosphere are in a substantial way worse than nationalism, the series does not make any apologies for Dainippon Giken’s crimes by invoking their ‘Japaneseness’. For reference, please remember that Shirow Masamune got into writing the Black Magic manga because he thought Space Cruiser Yamato by Leiji Matsumoto – I repeat, Leiji Matsumoto, who went to bat for a peace project by sending his artwork to the Nanjing Massacre Memorial in China – was ‘too nationalistic’! Instead it’s the Tank Police – destructive and brash and chauvinistic as they are – who stand between Newport and its ruin. And even if the government of Newport is supposedly corrupt and ineffectual… in the end, that’s where any hope for de-escalation lies.

It’s not a difficult choice for me, between the 1988 OVA and the 1993 OVA. I highly prefer the 1988 version, for all its risqué zaniness. But the 1993 OVA is by no means bad, and I found myself concluding that the points it had to make about the nature of warfare, crime and big business in the coming century turned out – again – to be remarkably prescient. Shirow Masamune really did turn out to be something of a prophetic voice about many of our present technological and political predicaments, though it’s deeply unfortunate that most younger Americans are familiar with his work only through ‘woke’ Twitter-driven controversies over Scarlett Johansson.
Labels: 90s cop drama cyberpunk Japan mecha OVA political commentary satire science fiction