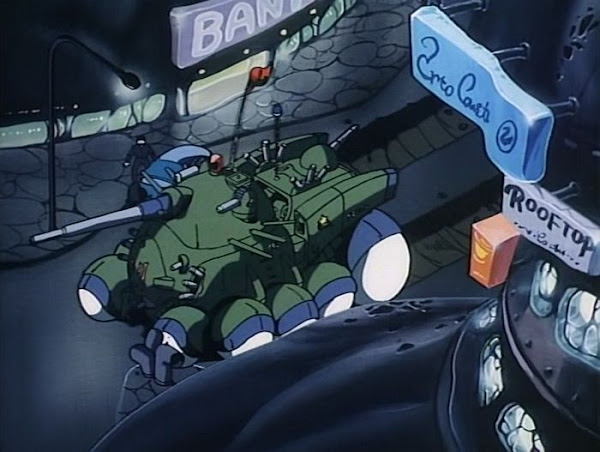 Whenever you go outside, you need to wear a mask – that’s a public order handed down from the government (and has been as long as anyone can remember), and they won’t take responsibility if you get sick and die from the pandemic. In the meantime, though, infrastructure is crumbling or is being wantonly destroyed by various forms of reckless use. The environment is suffocated beneath masses of human waste. Œconomic inequality is skyrocketing. The rich throw around ridiculous amounts of money on artwork and private security firms while the poor are left begging for scraps. Hospitals are for-profit, not interested in curing disease, and human beings are experimental playthings for geneticists. Politicians either squabble ineffectually over ephemeral problems, or else they’re completely on the take. Violent crime is spiking. And the police are all equipped with the latest military hardware, including body armour and literal tanks. They generally don’t have that much regard for things like due process, bodily integrity or safety of civilians. Am I doomscrolling the latest headlines? No, I’m just watching Dominion Tank Police, one of the lighter, more absurdist and more humour-filled creations of Shirow Masamune: one of the great founding fathers, if not the founding father, of 1980s cyberpunk manga and anime. I am doing a watch-through and review here as my first original content for Paneurasianist Weeb.

The unique visual style of Dominion Tank Police, which is equal parts Blade Runner and Nausicaä – the skyline of a fictional Newport dominated by melting-carapace skyscrapers glimmering with neon lights; slick and bulbous armoured vehicles that likewise recall insectoid life; post-apocalyptic spikes and leather clashing with segmented body armour and visors; strip-teasing cat-girl replicants with implausibly big machine guns and big hair – is entirely and gloriously a product of its pop-cultural epoch. But, as you can probably tell from my intro, it has actually managed to age pretty well in terms of its topical content. DTP deals with things like police militarisation, privatisation of force, œcological crisis and the bird’s-eye view of bioethics. That’s probably because our modern day really has managed to turn into the nihilistic, hyperprivatised, megacorporate cyberpunk dystopia that Shirow Masamune kept trying to warn us about.

What is so endearing about DTP is just how completely over-the-top it was: something like Blade Runner meets Paul Verhoeven’s take on Starship Troopers. The main protagonists – the Tank Police – are really not good people, and that’s made crystal-clear from the outset. The opening dialogue between the captain of the Tank Police and a civilian politician basically shows how they operate: ‘You politicians wrote these terrible laws, we’re going to uphold the laws, and we’re going to do it our way!’ When we are introduced to them in person, they have a suspect suspended by his neck, they’ve put an unpinned live grenade in his mouth which is strung up to a bucket of water, and they’re taking potshots at the bucket in order to get him to talk. On another occasion, they have a suspect strapped to a game-show wheel (again with a live grenade in his mouth) with Leona in a bunny outfit as the emcee, while the Tank Police take turns throwing knives at him as he spins.

The balding, white-haired Captain of the unit is a jaded short fuse who is perpetually overwhelmed with insurance claims and legal paperwork from his wantonly-destructive underlings. The squad leader, Britain, is a shades-rocking, Tom Selleck-‘stached, chain-smoking loudmouth with an over-happy trigger finger and deceptively fragile feelings. Most of the rank-and-file Tank Police are emotionally-stunted, cartoonishly sadistic and have unhealthy fixations on their hardware. One of the major character arcs of the first series of DTP involves the Johnny Rico inculturation of the newest recruit, Osaki Leona, from being a sort of sweet and sort of uncertain motorcycle cop into embracing the outrageously destructive and hyper-militarist ethos of the Tank Police. (It isn’t always clear whether or not Shirow endorses this ethos himself.)

Part of the charm of this late-eighties neon-cyberpunk live-wire of an OVA is that it veers wildly between an insouciant irreverence toward its dystopian setting, and an inflected seriousness with regard to the motivations of some of its characters. We get to see a lot of the Tank Police routinely doing Blues Brothers mall routines and Dukes of Hazzard stunts on their hardware, that’s part of the entire reason to watch the show. In particular, Leona’s and Al’s miniature ‘toy tank’ Bonaparte (to which Leona becomes unshakeably attached and which has, I suppose, the tank-equivalent of a super-deformed character design) manages to wreak an outsized share in the destruction. In the most infamous moment of the second episode, DTP goes out into barely-SFW slapstick territory when Buaku and his gang of petty thieves (including the aforementioned cat-girl replicants, Anna and Unni Puma) decide to use inflatable dildo mines to outwit the Tank Police, to hilarious effect.

But the latter two episodes in particular, which involve Buaku’s gang going after a $900 million painting at Sotheby’s, take a serious turn into the question of what happens to humanity when it plays god with human genetics. This section still includes some humour, including a fourth wall-breaking TV display which talks about Dominion Tank Police satirising the high art scene and the class politics around it. But it actually has some pretty good dramatic pacing, including a Mexican standoff between Buaku’s gang, the Tank Police, and the private security firm the Red Commandos – who are also after the painting and have an equal disregard for human life and safety. Buaku actually turns out to be something of an anti-villain: far deeper and more sympathetic than the show early lets on. He was the result of a genetics/robotics experiment, code-named ‘Greenpeace’, which was designed to unlock the origins of the human psyche and tap the deepest wells of human biological potential. His turn towards a life of crime is revealed to be a result of a set of implausible coincidences, combined with his exposure to police brutality while he was still mentally an ‘infant’. And it’s ultimately revealed that he’s not in the art heist for the money: he really does want to know where he came from, what he is, and why he exists.

Dominion Tank Police really is an odd mishmash of parts – at turns satirical and sincere, such that the end result is almost, almost deliberately absurdist in character. For example, the occasional ‘down-time’ we get to observe among the Tank Police – the heart-to-heart conversations between the unit chaplain and Leona, for example, or her shy and innocent budding romance with her tall blond squadmate Al – can for a few moments distract us from the over-the-top institutional sociopathy of the unit. Perhaps it is a commentary on the tenor of the show as a whole that I’m still not sure if this is a deliberate writing choice or not. And this is the kind of choice that you really have to watch and observe a little differently in the wake of events like the killings of Tamir Rice, Michael Brown, Philando Castile and George Floyd. You can – and should – still laugh at it, but the humour becomes that much darker.

The original DTP OVA is still definitely worth a watch, though: on account of its æsthetics, which are very much a product of the 1980s and built on the iconic dystopian expressions of the cyberpunk ethos; on account of its forays into satire and topicality which still feel painfully relevant; and also on account of its acerb absurdist humour and just plain ‘WTF?’ moments. It’s a ‘period piece’, but a lot of it still holds up.
Labels: 80s action cop drama cyberpunk fanservice OVA political commentary science fiction