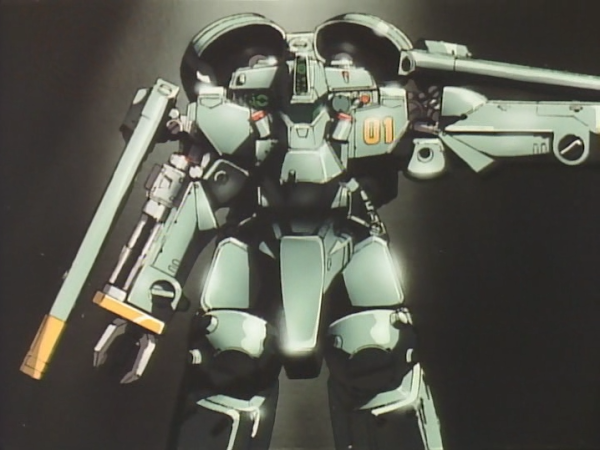 Is there anything more beautiful than an innocent romance between two college freshmen at the crossroads of life, trying to decide what they mean to each other? Well, I decided to find that out by watching Aramaki Shinji’s OVA one-shot Metal Skin Panic MADOX-01. Now, you might think that this title sounds suspiciously like a mecha anime. And you might look at the artwork and think that this title looks suspiciously like a mecha anime. You might even watch the opening battle sequence and think that this title is about mechas versus tanks. But looks can be deceiving. After all, you might think on first glance that Macross is some kind of space military sci-fi saga, but it’s actually 110% a daytime soap. MADOX-01 is really the heartwarming story of a part-time auto mechanic and vocational school student, and the much wealthier private school graduate, liberal arts track love of his life, and their struggle to keep true to their love in the face of their social and economic differences. It’s basically a forty-minute condensed animated adaptation of Jane Austen’s Persuasion. With… uh… mechas and tanks.

The OVA opens in a desert, where an American tank squad led by Lieutenant Kilgore is participating in a war games exercise. His entire squad gets completely creamed by the eponymous suit of power armour, piloted by the lovely Elle Kusumoto. Kilgore, his pride rather badly wounded, promises to get even with the MADOX in a live rematch. But the whole thing turned out to be a sales pitch from a Japanese arms corporation to the US Marine Corps, with whom they are under contract. But, military contractors being what they are, they promptly lose the MADOX in a freeway accident – and they left it in scramble mode. It lands up in the hands of poor vocational-school student and Francis Ford Coppola fan Sugimoto Kôji. Kôji recently broke up with his girlfriend Nagura Shiori over her father’s plans to send her abroad to England to attend a three-year college, and he’s feeling kinda bummed. But Shiori sent a message through his friend Onose to meet her at the top of the NSR Building (based on the NS Building in Shinjuku) that evening. Having nothing to do until then, apparently, Kôji opens up the MADOX, which promptly traps him inside as the pilot and takes over with its automated systems. Both Kusumoto and Kilgore start chasing down the MADOX – Kusumoto to prevent Kôji from destroying Tôkyô, and Kilgore to prove his tank’s superiority over the MADOX once and for all. But Kôji just wants to see his ex one last time… 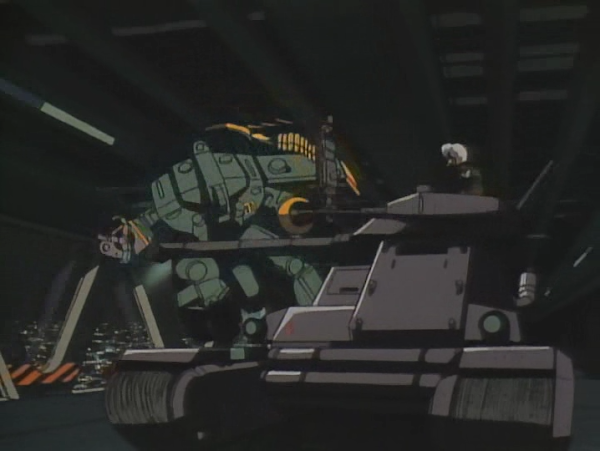 It’s not really accurate to call MADOX-01 ‘cyberpunk’, even though it does feature considerable degrees of overreach by big corporations and governments, technology exceeding wisdom, and an anti-authoritarian loner protagonist. Gibson himself would probably approve of its being a love story, so that’s not really a problem. But there’s no real exploration of man’s social relationship to technology. To some extent the technology isn’t even the point, and in the end Kôji rejects the MADOX in the most fervent, and final, possible way.

On the other hand, Aramaki was clearly using whatever excuse came to hand, to drop ham-fisted anti-war and anti-nationalist statements into this OVA as well – not that I’m complaining, mind you. Kôji’s apartment has a great big poster for Apocalypse Now, for starters. Elle Kusumoto tells Kilgore not to turn Tôkyô into ‘another Vietnam’ in going after the MADOX: a warning he callously ignores. There are several references to the Cold War, the Communist Bloc and the arms race being a motivation for the MADOX’s commission in the first place. There’s also one memorable scene where the MADOX gets offroaded by a couple of road hogs in a luxury land yacht with a great big Rising Sun flag painted on the hood (which even back in ‘87 was a symbol of the Japanese far-right). Kôji retaliates by sawing off the roof of their car with the MADOX, and then giving them a mechanised middle finger as he rides off. 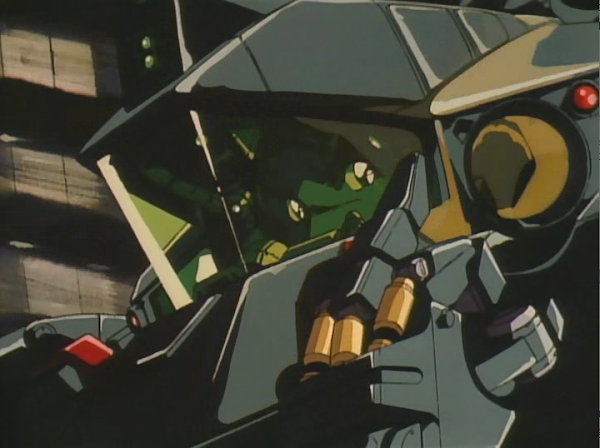 But the American and Japanese militaries and the defence contractors – with practically the sole exception of Kusumoto – none of them come off too well. Losing the MADOX in an accident, leaving the MADOX in scramble mode, squabbling over who takes responsibility or pays damages, whingeing about terrorist plots, not caring about collateral damage or civilian casualties… They all come off as varying shades of arrogant, callous and incompetent, with the swaggering American tank jockey Lt Kilgore being only the most obvious example.

Sociopolitical commentary surfaces in a couple of other ways, too. MADOX-01 goes out of its way to show Kôji as an economic underdog as well as an ‘alienated loner’. He lives in Nakano while it’s strongly implied that Shiori lives in Shinjuku. While Nakano might not be as poor as, say, Kita or Arakawa, it’s definitely much more working-class in character than Shinjuku, which is Tôkyô’s CBD and home to a lot of highly wealthy and powerful people. The fact that Shiori is shown in a private school uniform and her dad clearly has the money to pay international tuition in the UK are also notable status markers which divide her from Kôji, who is shown wearing a mechanic’s outfit or a more blue-collar shirt and suspenders, living in a studio apartment, eating ramen, holding down a part-time job and studying in a vocational school. His relationship with Shiori is always shown as a ‘long shot’ in Kôji’s dreamy-regretful flashbacks, but after all he has to go through in his hijacked piece of haywire military hardware, we’re clearly rooting for him to go make up with her and tell her how he feels by the end. 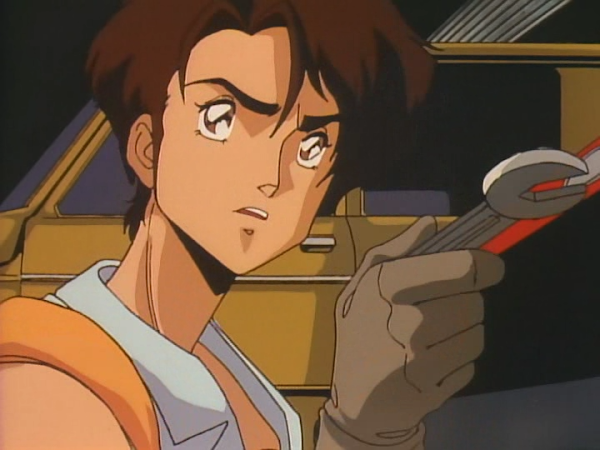 So, what else to say about MADOX-01? The action sequences between Kôji and Kusumoto, and Kôji and Kilgore, are all convincing and fun even when their placement and rationales are far-fetched, including the ones in the underground and on the NSR Building. The soundtrack is lots of catchy 80s synth-rock, with the number that comes on when Kôji first opens up the MADOX in particular having that ‘aww yesss’ quality. This was Aramaki Shinji’s (Genesis Survivor Gaiarth) first-ever stab at mecha design in animation, and given how first goes at these things usually turn out, what we get to see isn’t bad in the slightest. He clearly likes his gunmetal grey, his modular segmentation, his realistic proportions (at least in mechanical design): the result for the MADOX is bulky-but-believable. It’s also good to see that the MADOX power armour has real physical and technical limitations, something which a lot of mecha anime more than occasionally have trouble with. It runs out of ammo, for example, and has to be restocked from the MADOX-02. It also runs out of gas at one point, and Kôji has to get more diesel from a filling station. (He draws some funny looks from the other motorists there.) So the mechas and other military hardware all look nice and shiny, but my one gripe is that I can’t say I particularly care for the artwork or articulation of the human characters. The faces of the people are flat, hyper-stylised, angular, tiny-featured – practically caricatures of anime-face. Practically the only major character who gets proper expressions is Lt Kilgore.

So, yeah, MADOX-01 is probably not the best, or best-looking, mecha OVA out there. But it doesn’t pretend to be more than it is, which helps. And there are definitely far worse uses of forty minutes of my time than sitting back and enjoying some guns-explosions-and-robots popcorn action. The more so when it comes with a great heaping helping of anti-war sentiment, with some rom-com warm fuzzies thrown in for good measure. 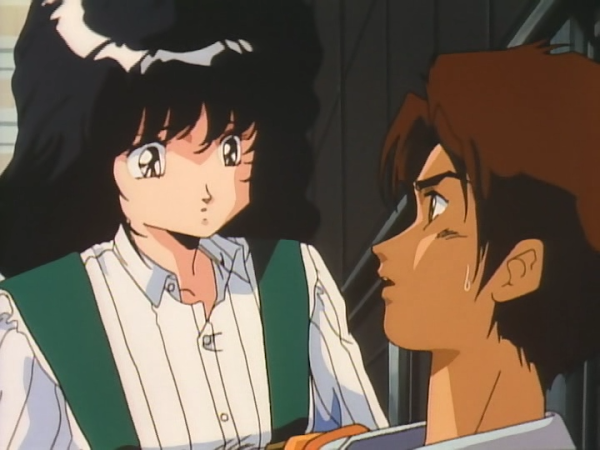