Alisa Selezneva and the Mystery of the Third Planet 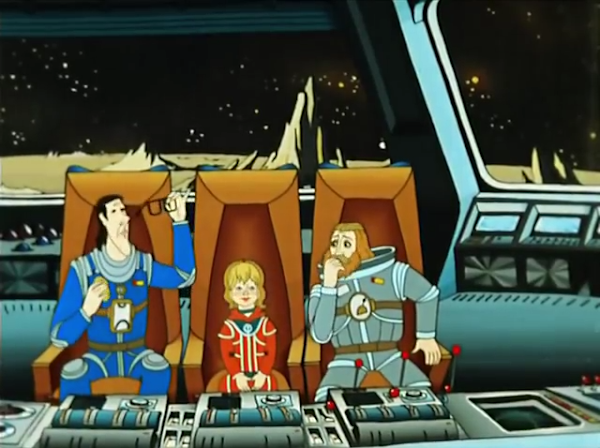 Going on MUBI recently, when searching up films that were related to Ghost in the Shell, one of the entries that popped up right away was a Soviet animated film called Mystery of the Third Planet (Тайна третьей планеты). Unfortunately it isn’t playing right now on MUBI, but YouTube is a wonderful thing: it didn’t take me long to find a good copy with subtitles. Now, I say ‘animated film’, but Mystery of the Third Planet is probably best considered an OVA, and would have been considered as such if it had been released in Japan on laserdisc. At forty-eight minutes, in most countries Mystery of the Third Planet was not shown in theatres but instead went to television broadcast or direct-to-video. In the United States there are, if I remember right, at least two shortened, badly-dubbed bootleg versions floating around out there.

MUBI’s algorithm missed a bit, sad to say. Mystery of the Third Planet will disappoint you sorely if what you’re looking for is another Ghost in the Shell. Directed by Roman Kachanov – the same man who brought you the beloved Cheburashka – Mystery of the Third Planet is a cute, sweet, lighthearted, family-oriented space-operatic romp that really relies more on the lushness and careful articulation of its visuals than on the intricacy or convolutions of its story. 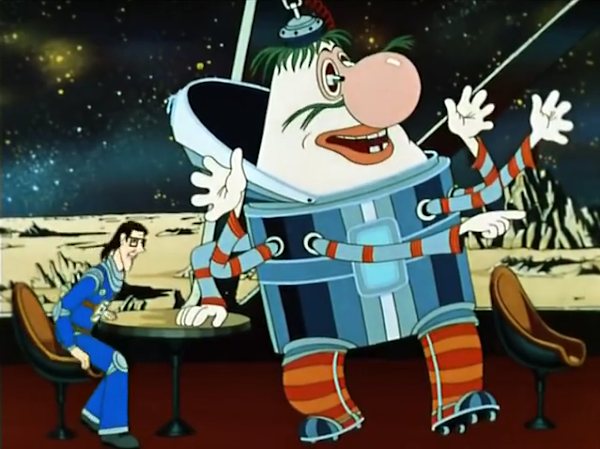 Based on the Alisa Selezneva series of children’s novels by Kir Bulychev (who receives writing credits on the screenplay here as well), Mystery of the Third Planet is set two hundred years into the future. It follows the adventure of nine-year-old Alisa Selezneva, her father the exobiologist Professor Seleznev, and the pessimistic Captain Zelenyi as they venture out into the galaxy in search of strange and rare new animals for the Moscow Zoo. However, as they set out on their journey in the Pegasus, they begin to uncover clues to the fate of two other starship captains, Kim and Buran. Famous for having circumnavigated the galaxy in their ship, the Blue Seagull, they have recently gone missing. As they begin to gather samples of rare animals, thanks to the last surviving ‘chatterbird’ they also start uncovering a strange criminal conspiracy involving the director of the Captains’ Museum, Dr Verkhovtsev, and an overweight alien hotelier named Jollier Ou. They are led to the Medusa system, and begin exploring the three planets orbiting that star, and the puzzles lead them to the third planet…

The standard of animation here is actually quite high, which ought to be expected from Soyuzmul’tfil’m. It is also quite distinctively Russian. The articulation is sometimes a bit over-fluid, which can be a bit distracting especially during the action sequences, but otherwise it’s technically impressive. The palette is tie-dye brilliant, and again we can see the influence of 60s and 70s psychedelia, with lush landscapes consisting of spire-like mountains, blankets of multicoloured flowers, bases and buildings constructed with space-age chic proportions. 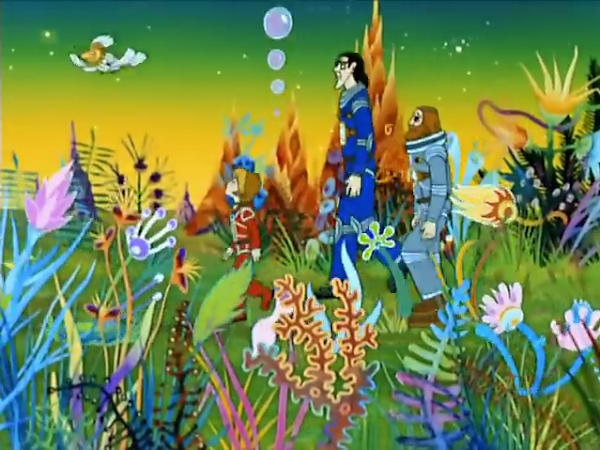 The character designs are particularly fun. Alisa herself is ridiculously cute, and the two adults who journey with her – her father and Captain Zelenyi – have not only distinct designs but also expressions and physical mannerisms which give them distinct personalities. The multi-armed, semi-robotic, clown-faced Gromozeka brims with both pathos and a kind of self-deprecating humour – in fact, all the non-humans and the robots as well manage to find that balance of sympathy and strangeness that we ought to expect from this kind of SFnal work aimed at children.

The music as well, though it relies on some heavy, ‘spooky’ synth-work of the sort you’d expect in 70s and 80s SFnal productions in order to sound suitably futuristic, still has an orchestral grandeur. It tracks the emotional swings and beats of the plot, and adds impeccably to the atmosphere. The music in fact underscores the optimism that undergirds the whole plotline. The moon is deemed to be a safe place for a nine-year-old to hang out, for example. Despite Captain Zelenyi’s dim prognostications and forebodings concerning their adventures, and although there are certainly still problems which we discover both through the conversations and through the action of the film, the future is still presented as a good place to be. 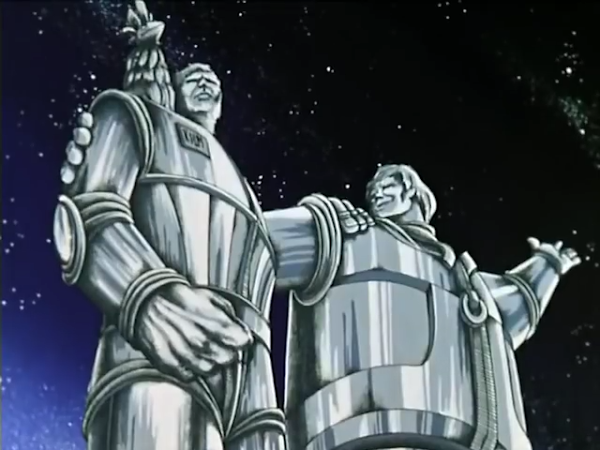 There actually isn’t much of a propagandistic tone to it at all, despite the ‘official’-looking hero-worship of Captains Kim and Buran and them being given their own museum. If there is a didactic ‘point’ to Mystery of the Third Planet, it would appear to be a somewhat conservationist one. The villains are poachers and space pirates who are endangering the wildlife of various planets, and of course Alisa and her father are motivated by a desire to discover, protect and preserve the species they come across. But this point is not driven home with a sledgehammer.

It’s therefore pretty easy to see why this film became a cult classic. Not much new ground is broken concept-wise, but the execution is charmingly done, and it’s certainly a chatterbird’s feather in Soyuzmul’tfil’m’s cap, so to speak. Mystery of the Third Planet certainly has a different tone and different thematics than the Vladimir Tarasov shorts I’ve been covering so far here – those tend to be much more conceptual, though they do interestingly share the same psychedelic and surrealist visual style. I highly recommend giving this one a watch. 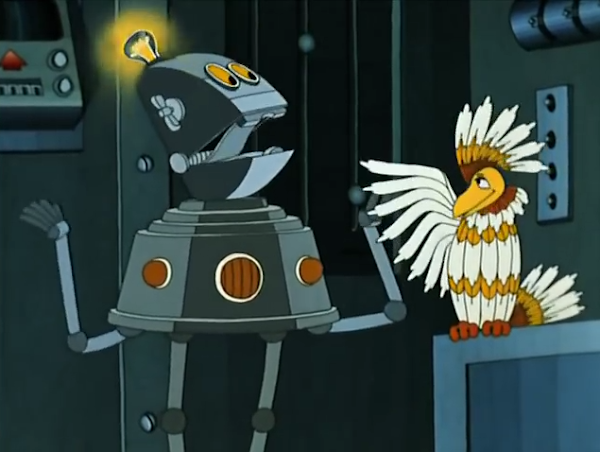