Nostalgia and (not-)belonging: Someday or One Day 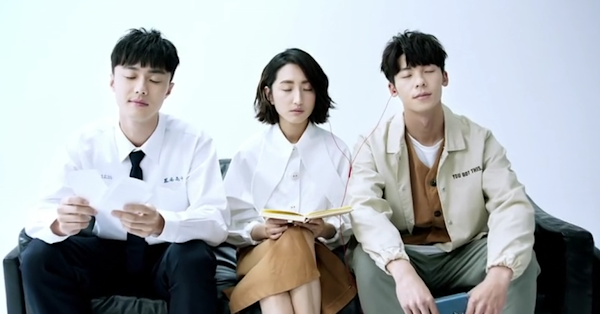 One of the things I got to do during quarantine this past year was to watch the Taiwanese time-travel C-drama Someday or One Day. Now, I was convinced to start watching this after trying to explain the plot of Your Name to Jessie, who told me that if I like this sort of movie then I should watch this TV show. To be frank, the two are in fact very similar explorations of teenage existential insecurity. They are also touching treatments of love and loss, destiny versus free will and memory versus personality. They also happen to share a very similar time-travel and body-swapping premiss, though Someday or One Day has considerably fewer explicit SFnal trappings than Your Name does.

The central conceit of the TV show is that a song – in this case, ‘Last Dance’ by Wu Bai and China Blue – combined with a piece of technology imbued with a particular emotion – in this case, a 90s-style Sony Walkman – can trigger a transference of personality between two people who share the same looks. Kinda goofy premiss, yes? Any more so than a falling meteor doing the same thing…? In any event, without being too spoilery (for now), the TV show explores, in a distinctly non-linear fashion, the various segments of the time loop created when a young woman Huang Yuxuan (played by Ke Jiayan) uses the Walkman to travel through time and jump into the body of a high school girl Chen Yunru (also played by Ke Jiayan) to meet her deceased fiancée Wang Quansheng (played by Xu Guanghan), who died in a plane crash while travelling from Taibei to Shanghai.

The acting in this C-drama is incredible, particularly from Ke Jiayan. Ke Jiayan convincingly plays two diametrically different characters: Huang Yuxuan is bold, direct, athletic and self-assured; whereas Chen Yunru is painfully-withdrawn, literary, brooding, teetering on the edge of depression. And then later on in the series, Ke outdoes herself when she, with equal conviction, portrays the latter making a heartbreaking attempt to pretend to be the former, in order to ‘fit in’, get along with her unsympathetic family and win over the boy she likes. Suffice it to say that she has a stunning mastery of subtle facial expression, vocal inflection, dress and body language, and gets to put that on full display here.

It’s kind of unfair to Xu Guanghan that Ke Jiayan gets paired up with him, because his acting abilities get so completely eclipsed by the leading lady. Xu Guanghan is more or less your bog-standard pretty-boy pop idol turned actor… and unfortunately that shows here in the directing and writing choices. To be fair, he does have to portray the same character at different ages and different levels of experience, which isn’t easy. And he pulls it off: we do sympathise with Xu Guanghan’s character Li Ziwei (a.k.a. Wang Quansheng) – both in his goofy, easygoing, irresponsible youth and in his painful, lonely and embittered middle age, crippled by injury and the loss of both his best friend and the love of his life. But this dynamic has – as perhaps it was meant to – a distinctly ‘B-plot’ flavour next to the psychological and personality-driven rivalry of Huang Yuxuan and Chen Yunru.

On the spear side of this drama, though, the real heavy lifting in terms of acting gets done by Shi Boyu, who makes up the ‘fourth person’ in this time-skipping love quadrilateral – the heavily-ambiguous, tragic Mo Junjie. Mo suffers from a hearing disability, and has to endure the cruel mockery of his classmates until Li Ziwei comes to his defence, after which they become best friends. But their relationship becomes distinctly awkward when Chen Yunru – the girl whom Mo likes because she is much like him – falls for the relaxed, carefree and irresponsible Li Ziwei instead. As I said, Shi Boyu’s portrayal of Mo Junjie is by turns intense, disturbing and heartwrenching. A murder attempt is made on Chen Yunru, with the culprit getting away, and for a significant time as we’re trying to figure out what’s going on Mo becomes distinctly – as Among Us players say – ‘sus’. (The Taibei police evidently think so, too, because Mo Junjie is the first person to get grilled when Chen Yunru is attacked, and the only one arrested when she dies.) It’s a distinct credit to Shi Boyu’s acting ability that he can convincingly play both guilt and innocence through his character’s withdrawn face. Throughout Someday or One Day, Shi Boyu’s character hits just the right balance of being troubling, enigmatic, empathetic and humane such that he could convincingly be either a murderer or a hero.

The plot is also wonderfully done. Minor spoilers follow. The entire story of a doomed love and unsolved murder mystery – which turns out to be a suicide – is in fact a big series of interconnecting time loops, and it’s told variously from the perspectives of each of the time travellers, such that we’re only getting one piece of the overall picture at a time, and trying to piece it together as we go. The actual sequence is secondary, and there is thus a greater focus on perspective, memory and personality. Someday or One Day draws out all the separate strands of the time loop and presents them to us from the different, if overlapping, perspectives of each of the protagonists (and one of the antagonists). The interweaving of memory, present experience, internal monologues and ‘what if?’ scenarios is thoughtfully and tastefully put together. There is at least one glaring plot hole involving how Chen Yunru’s first car accident happened, but in an intricate time-travel tale like this, even that’s doing remarkably well. Also, the cinematic treatment of one collapsing timeline – still photos on the wall of Huang Yuxuan’s flat blurring out and disappearing in a hiss of static – was a deft and tasteful touch.

There are some annoying pieces to the show, to be sure. There is a really unfortunate ‘rose tint’ to the show’s æsthetic nostalgia for the late 90s that comes painfully close to Gangtai-slash-haiwai boba liberalism. (There is a Japanese analogue to this phenomenon that is also not entirely admirable.) For the record: it wasn’t all Wu Bai power ballads and birthday parties and corner music stores and cutesy little tea shops. For most of maritime East Asia – including most of the target demographics for this drama – 1998 wasn’t too happy a year, and even Taiwan wasn’t completely unscathed. The cultural liberalism of the screenwriters also comes off in its silent treatment of Wang Quansheng’s life prior to his involvement in the time-travel loop – which might have been tolerable had they not been making a comparatively-safe statement and pretending it was somehow brave.

Still, despite these minor quibbles I have with it, Someday or One Day manages, in thirteen ninety-minute episodes, to be a poignant exploration not only of a tale of young love and loss, but also an almost Berdyaevian meditation on how personality is irreplaceably deep. Just because two people share the same memories, the same experiences, the same face or the same preferences in music or taste in romantic partners does not make them identical. Although the screenwriters couldn’t quite resist giving Li Ziwei and Huang Yuxuan their happy ending together, Someday or One Day is really a love poem to the Chen Yunrus of the world: the ones who can never manage to ‘fit in’ or ‘measure up’ to the Huang Yuxuans, but who inhabit rich inner worlds of their own. In the end, it’s the time-travelling Huang Yuxuan who has to make the choice to recognise Chen Yunru’s inner worth, to trust her and to give her back control of her own life. The show ends on a note championing precisely this worth and beauty specifically of the shy, wistful, literary, misfit young people who never seem to quite belong or fit into the world, but still have to live in it and make it their own.
Labels: 10s 90s China drama music nostalgia time travel