Variations on a theme: Robot Carnival 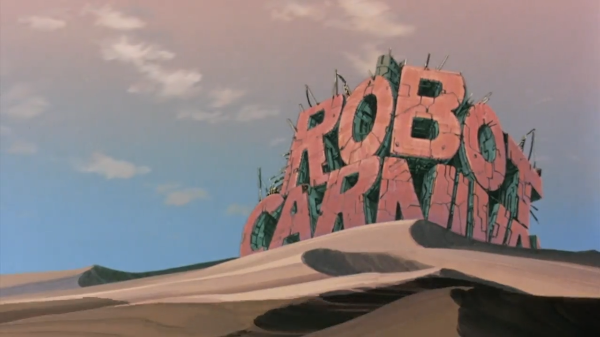 In my traversing the œuvre of Ôtomo Katsuhiro, the next logical stop after ‘Construction Cancellation Order’ would have been – no, not Akira, though we will get to that – another collection of shorts: Robot Carnival. Robot Carnival is quite a bit more uptempo and considerably ‘lighter’ fare than Meikyû Monogatari, such that apart from the last short (‘Chicken Man and Redneck’ by Nakamura Takashi) none of these can really be called ‘cyberpunk’ in the strict sense. Rather, they are artistic – and sometimes only loosely SFnal – explorations of the ‘problem of technology’ and the spiritual potentials of having technology grow closer and closer to humans.

As I alluded in my review of Metropolis, the framing device directed by Ôtomo Katsuhiro for Robot Carnival is a sequence that recalls easily Terry Gilliam’s MAD Magazine-styled paper-cutout animated sequences that intersperse Flying Circus, Holy Grail and Life of Brian. Indeed, the mechanical Jawa-type sandcrawler that comprises the ‘Robot Carnival’ takes precisely the shape of the chiseled letters of the title frame of Life of Brian. There is also a similarly Holy Grail-era Pythonic mixture of absurdism and black humour to the opening and closing sketches – in which the titular carnival goes from entertaining to psychotically tossing high explosives into a village. (‘Let’s not bicker and argue about ‘oo killed ‘oo!’) The only thing Ôtomo’s framing is really lacking is a gigantic bare foot descending from the heavens and crushing the whole rig… though he does have the crawler run aground and collapse spectacularly on a sand dune.

As for the seven main segments that are segued by this carnival: they run the gamut from dark and nightmarish, to quietly and touchingly introspective, to out-and-out camp and kitsch. The only real unifying factor of the collection is the emphasis on the relations between man and machine – and they watch somewhat like the concept-piece episodes of The Twilight Zone or Black Mirror. Only two of the shorts have any sort of real, intelligible spoken dialogue at all. Call me a sap if you like – it’s certainly out of character with regard to my cyberpunk kick – but I think my favourite shorts in this collection are the irrepressibly pulpy, campy ‘Deprive’ and the unapologetically twee ‘Starlight Angel’… both of which are completely unvoiced. 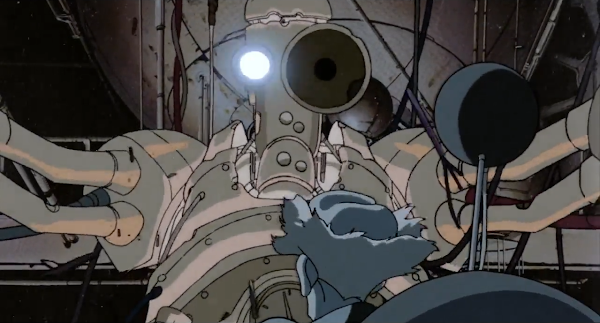 The collection opens with Morimoto Kôji’s (of Первый отряд fame) short ‘Franken’s Gears’, which features a scientist gleefully rejoicing about bringing a machine to life in the same way Victor Frankenstein brought his monster to life. In this short, as in the Shelley book, there are unintended consequences. It, uh… doesn’t end well. The story itself is pretty bare-bones, but the animation in this segment is utterly brilliant: the interplay of light and shadow, the voicelessly manic expressions of the elderly scientist, the detritus and demolition that take place in the lab over the course of the ‘experiment’ – all beautifully and lovingly inked and coloured. 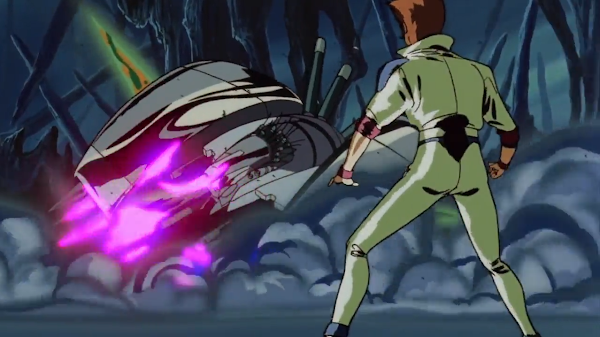 The short ‘Deprive’ by Ômori Hidetoshi (Dan Doh!!) takes place on another planet, where a raid by killer robots separates a human girl from her mechanical significant other. We later see a man with red hair come riding to her rescue, and over the course of a long extended fight scene of the red-haired man against two of the kidnapping killer robots and their laser-eyed master, it is revealed that the red-haired man is actually the girl’s old lovebot, who has apparently been retrofitted with weaponry and martial arts routines as well as bishônen looks. Again, ‘Deprive’ is worth watching solely for the ebullient late-80s camp value: brightly coloured, brightly framed, brightly lit, powered by 80s muscle-rock anthems and featuring raw tonnage of combat robotics, lasers, explosions and animated kung fu. It’s the sort of short that a good-natured thirteen-year-old boy would write if he were into SFnal set-ups, alien worlds, robots and rescue missions. It’s just all-around good clean fun. 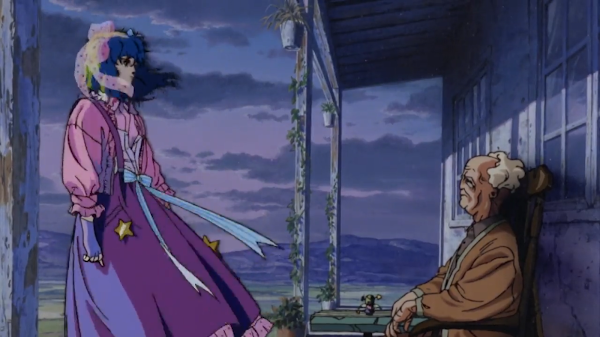 ‘Presence’, directed by Umetsu Yasuomi (A Kite) is a much deeper, more ambitious, more emotionally and psychologically-involved short. Taking place in the distant future in a university town somewhere in Europe – ostensibly England or France – it features robots living side-by-side with humans. A university professor in an unhappy marriage with an emotionally-distant career woman decides, like Ovid’s Pygmalion, to build himself a female companion out of the spare parts of clockwork toys. Like Galatea, the professor’s creation comes to ‘life’, and asks him to love her the way he clearly wants to be loved. Here ‘Presence’ departs radically from Ovid, as the professor’s answer to this, dramatically, is a wrench to the head. As the professor grows older, and his daughter and granddaughter grow up in the house he lived in with his wife, the regrets over his destruction of the robot begin to set in, and he begins to see his robotic Galatea appear before him as though she is alive. Here too, the animation is superb – particularly the background set pieces, which are a wonderful mixture of high futurism and the quaintly mediæval. The character designs are a bit bland, with the exceptions of the older versions of the professor and his offspring. And there are some nice flourishes – like the robotic businessman whose head gets stolen and played with like a football by a group of mischievous schoolboys. It’s a thoughtful piece, but it promises a lot in its premiss which its execution doesn’t really succeed in delivering. 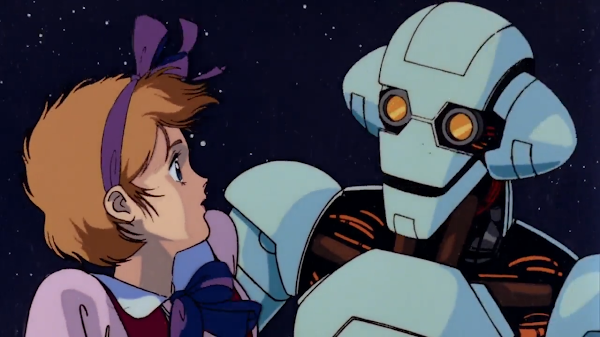 ‘Starlight Angel’ is the other one of my favourites, directed by Kitazume Hiroyuki (animation director, Zeta Gundam). Also delivered completely without dialogue, it’s basically a shôjo short, featuring two high-school age girls at a robot-themed theme park: a blonde and a redhead. The two of them are obviously having a great time together, and it’s clear that they are close friends. However, it turns out that the redhead’s bastard boyfriend is cheating on her with her (as it turns out, innocent and unwitting) blonde friend. In tears she runs back into one of the theme park’s attractions, where she is faced with an enormous robot attacking her. The robotic usher for the ride, who had been attracted to her when she’d run past him earlier and dropped her locket, rushes to her rescue. An unrobotic reveal happens and he turns out to be a kind-hearted kid in a costume, and the redhead decides to go out with him instead. The animation for this short is basic but fun and colourful – it’s great to see the usher in particular, with so few articulation points in his robotic mask, still effectively deliver a broad array of emotions through his body language. The flight scene inside the ride is trippy. There are a bunch of Akira Easter eggs. But what really makes ‘Starlight Angel’ work, and what really edges it into being a favourite for me, is the score. The ‘Starlight Angel’ theme is atmospheric, synth-laden 80s soft rock, and it manages to convey nostalgic, dreamlike feelings of friendship, heartbreak and innocent young love. 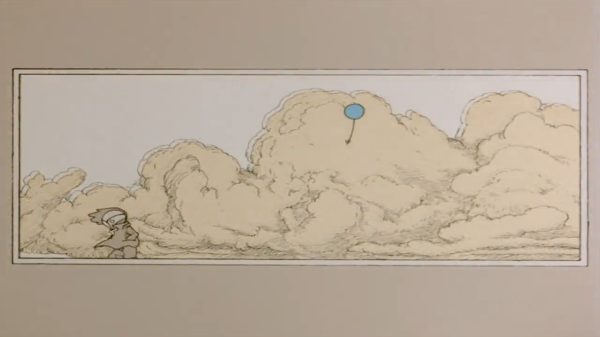 Then there’s ‘Cloud’, directed and animated by Mao Ramudo (Tomcat’s Big Adventure). An introspective, highly impressionistic piece with a fairly minimalist approach to animation that drifts between a rough pencil-sketch style and ink hatching, ‘Cloud’ involves a robotic child trudging along beneath skies that go from peaceful to stormy, beneath clouds that take on all different sorts of shapes, including human and animal… and, of course, a mushroom cloud. Eventually the robotic child looks up skyward, and a pair of doves is shown to take flight into the skies, while a human girl is shown walking towards us. Although the animation is charming and the musical accompaniment is certainly stirring, I’m not sure that ‘Cloud’, unlike its name, really escapes the weight of its ponderous pretentiousness. 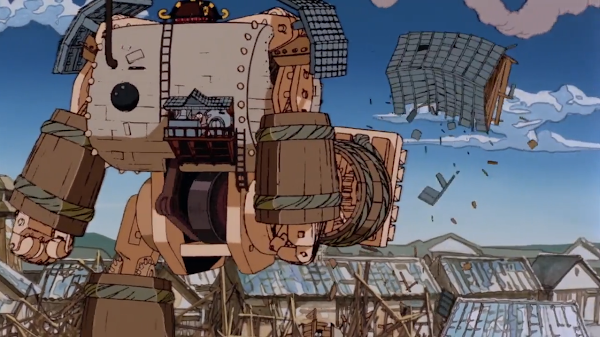 ‘Strange Tales of Meiji Machine Culture: The Westerner’s Invasion’, directed by Kitakubo Hiroyuki (Black Magic M-66, Golden Boy), is a mecha short which can be justly described as steampunk. A gigantic wooden steampowered mecha ‘Tinkerbell’, equipped with cannon and steel claws, appears in the tenements of Edo during the late Meiji period. Manned by the haughty, overconfident and imperialistic Westerner John Jack Folkerson III, ‘Tinkerbell’ wreaks havoc upon the harbour district until the mechanical palanquin ‘Steamer Benkei’ – captained by Komagata Sankichi and four of his motley crew of friends – shows up to stop him… duking it out with the giant mecha and flattening much of the tenement district in the process. Despite the rough linework, washed-out colours and cartoonish backdrop, it’s clear that there was a lot of love and attention lavished on the animation here, particularly with the coal-fired, steam-powered mechanical armours on display. There’s something of a Paul Verhoeven quality to the short as well, given how over-the-top militaristic and even propagandistic the dialogue is, particularly from Sankichi. It’s not entirely clear whether the thing is genuine or a satire until the very end, when Sankichi is bantering with the only female member of his crew, Yayoi. She basically shows him up as a dork who, like Folkerson, is full of hot air and out of touch with reality. 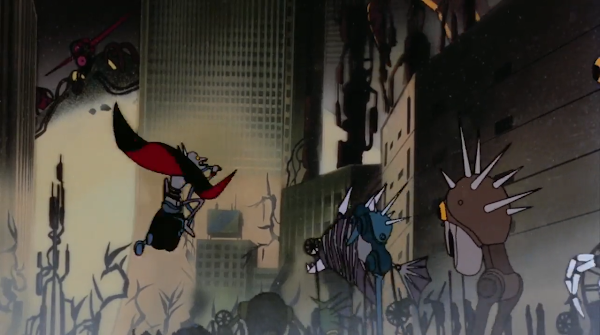 The final short in the anthology, ‘Chicken Man and Redneck’ by Nakamura Takashi (Catnapped!, Harmony) is a story about a takeover, commanded by a hoverbike-riding red-caped automaton with a golden crest resembling a Greek soldier’s helmet, who transforms the various pieces of machinery in a city into an army of rampaging robots. The sole witness to this is a drunk whom the red robot chases into the middle of the robot army’s bacchanalian frenzy. Although technically impressive and featuring the same high quality and articulation of animation as the rest of the shorts, this piece is hampered somewhat by the ham-handedness of its ‘so it was all a dream… or was it?’ ending.

Unlike with Meikyû Monogatari, Robot Carnival doesn’t seem to be saying anything really consistent. Instead, it can be likened to a variety show and categorised as ‘variations on a theme’. However: the broad variety and range of technical talent on this anthology is frankly impressive, and the shorts are on the whole entertaining. As an opportunity for these animators and directors to showcase their talents and ability, on the whole this anthology seems to have been a success.
Labels: 80s anime shorts historical interest Japan rom-com satire science fiction steampunk