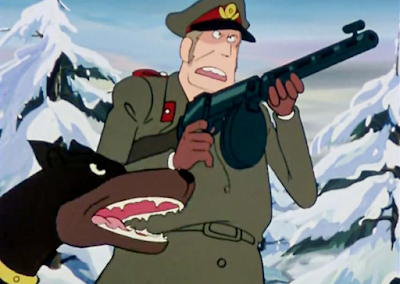 As Silk and Chai was to The Heavy Anglo Orthodox, so too is this blog. I am somewhat spreading out my blogging pieces across these three platforms to provide space for different niches of commentary. The Heavy Anglo Orthodox will deal with devotional and religious-philosophical topics. Silk and Chai will deal with gæopolitics and the high literature, folk cultural appreciation and history of the Silk Road cultures. And this blog, Панъевразийский виабушник (or Paneurasian Weeb) will deal more with pop-cultural and geek-cultural themes, particularly those which are a bit more in the mainstream, shall we say, of your general fandoms M, C, K, J (and, of course, R – this is a Paneurasian blog, after all). The æsthetic for this blog will be, perhaps fittingly enough, post-apocalyptic and cyberpunk. I certainly expect there will be some thematic overlap, but since this blog joins the THAO family of blogs navigating between the three shouldn’t be a problem.

As I hope to show in my series of THAO retrospectives: previously my interest was in linking certain aspects of modern pop-cultural phenomena, particularly Japanese anime and manga, to various historical roots in (for example) Chinese opera and wuxia novels. I have also been somewhat interested in Japanese pop culture’s relationships to Western philosophy and to the country’s own past. But there was a significant dimension of commentary that I was missing out on, and that was the science-fictional warnings that are implicit in much of Japanese pop-culture particularly from the 1980s and early 1990s. This blog will basically serve as a counterbalance to my previous fixations on the history of Japanese comics and movies, and lean more towards what anime, manga, TV dramas, martial-arts movies and so on can tell us about modern cultural trends. Particularly about the dominance of corporations, the disintegration of the personal into the mechanistic or into the abstract, and about the rise of robotics and genetic manipulation as a growing form of biopolitical tyranny. Most of the political commentary here will be in the same vein as it was on THAO and S&C, however the emphasis will be slightly different.

I plan to be treating here movies, TV series and miniseries, animated media, comics, music, video games, podcasts and other pop-culture phenomena. There may also be a dash of politics and metacultural commentary on here as well. As such, I am planning on starting off this blog (instead of going in ‘cold’, so to speak) by crossposting here some of my more apposite geek-cultural commentaries from THAO: if for no other real reason than to set forth the tone and tenor which I’ll be carrying forward. Hopefully this way the transition may be a bit easier to the sort of commentaries I want to do. I will not be taking anything off of THAO, but the link pages will ‘live’ (that is to say, with updates and so on) here on PEV.

In any event, welcome to the blog!
Labels: blogging geekdom