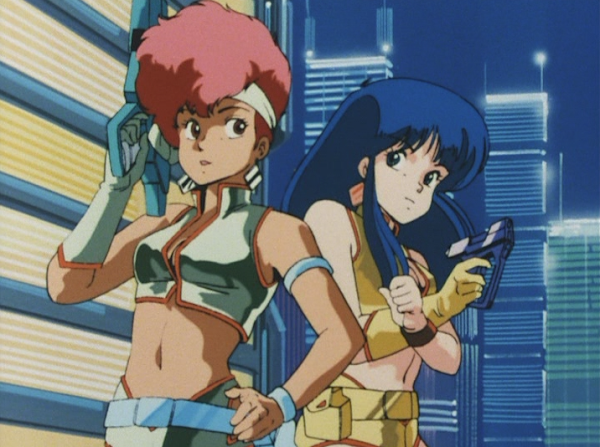 The English-language DVD lightbox for the Dirty Pair TV series claims that Kei and Yuri are ‘anime’s ultimate girls with guns’. Given that this 26-episode TV series came out in the middle of ‘85 and that it’s based on a series of light novels that were published in 1980, I think there may be a good case to be made that the Dirty Pai—I mean, Lovely Angels—are in fact the archetypes as well, having brought ‘girls with guns’ to Japanese animation the same way Huangjia Shijie’s duo of Michelle Yeoh and Cynthia Rothrock did to Hong Kong cinema the same year. Another interesting aside is that Dirty Pair seems to have been something of a stylistic signpost for later cyberpunk anime works in the same way Ai City was. As may be expected, therefore, Dirty Pair kicks ass. It’s a relentlessly-fun admixture of action-comedy, buddy-cop story, creature horror, light fanservice and pastiche on various SFnal devices and tropes, which even at thirty-five years old still holds up surprisingly well.

Dirty Pair follows the episodic adventures of two partnered ‘trouble contractors’ – basically guns for hire – named Kei and Yuri, who work for the 3WA (World Welfare Works Association) and get shipped out by their boss to deal with various problems in the galaxy. They have a reputation for getting the job done… but usually causing six-, seven- or eight-figure collateral and property damage in the process. (There is definitely something A-ko-ish about the escalating action scenarios which produce these comically-catastrophic results.) Hence the unflattering epithet of ‘the dirty pair’ which has become their reputation… but which the two girls heartily dislike and vociferously correct on every possible occasion. 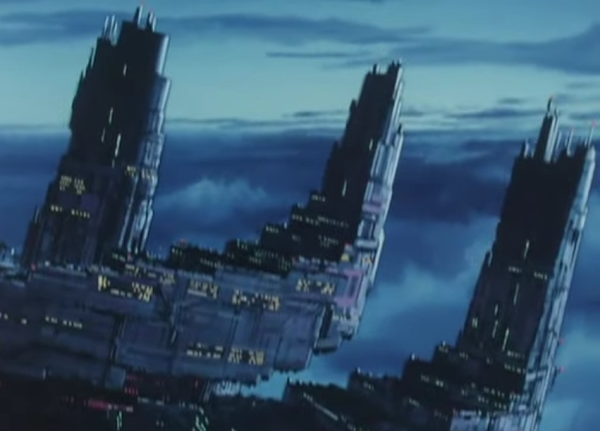 There’s not a lot of backstory or character development involved here, obviously… but then, there doesn’t really need to be. The girls have a semi-permanent residence in Eleanor City – though they killed the main computer of the arcology they live in and partly demolished the foundations at the same time, causing the whole tower to lean like Pisa in the very first episode. But other than that, Kei and Yuri are always on the move between jobs – or from job to holiday and back. Normally attired in low-cut short sleeveless jackets, hot pants and thigh-highs, Kei and Yuri sneak, bluff and shoot their way out of all manner of sticky situations. The duo are assisted in their jobs by a genetically-engineered cat that looks more like a bear named Mughi, and a robot that’s something of a mashup between R2D2 and an exocomp named Nanmo (a riff on the Latin prefix ‘nano’ and the Japanese ‘nani mo’ meaning ‘anything’). At the same time, they bicker and banter with each other, pass critical commentary on each other’s looks, swap notes on cute boys, and constantly try to wheedle bonuses and extra holiday time out of their boss so that they can shop, eat fancy dinners and go on dates. Easily half of the show’s draw is the rapidfire back-and-forth repartée of the eponymous duo – and it’s clear that the two seiyû, Tongû Kyôko and Shimazu Saeko, have a great chemistry together that allows them to bounce off each other naturally in such sequences.

The character designs, particularly of the two girls, are actually remarkably well done for 1985 – they are not only reflective of their era but in some ways definitive of it: Kei being the more ‘butch’ of the two and Yuri being the more girly, with Kei’s big shock of wild red hair and Yuri’s silky blue-black locks being something of an iconic calling-card. It’s clear that the series artists also had fun with the set designs, including the computer rooms, mechanical hallways, industrial parks, various planetary landscapes and skyscrapers. The mechanical design as well clearly had a lot of thought put into it, with the girls flying, chasing and crashing all manner of futuristic flying and spaceborne vehicles. The overall æsthetic has the typical square, chippy, modular look of a lot of early Japanese cyberpunk. They got a lot of use out of that typeface – you know the one I’m talking about, the blocky, retro techno font with heavy descenders. (I actually went and looked it up: the font I was thinking of is called Lazenby Computer. The one Dirty Pair tends to use isn’t quite the same, but it has many of the same characteristics.) 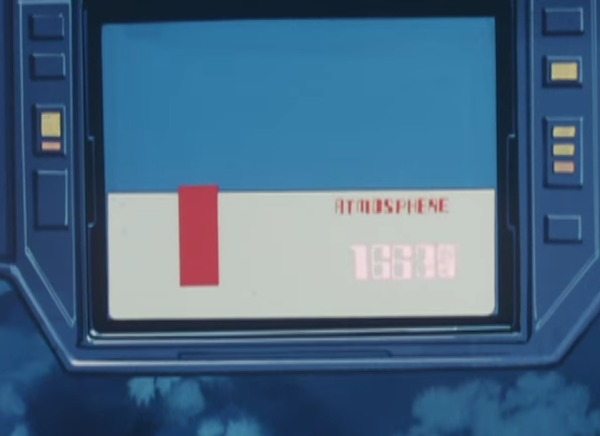 The opening and ending themes are both infectious 80s pop tunes, with (as should be obvious given my pro-Russia leanings) Nakahara Meiko’s ‘Russian Roulette’ having a particular place in my heart – unfortunately there’s not a lot more that can be said for the series music-wise. The animation showcases some of the best of cheesy high 80s camp, though it’s clear that in some episodes they faced some budgetary restrictions such that the backgrounds, chase and action sequences were rendered a little bit flat and incomplete-feeling. But that was apparently par for the course at the time.

But another fun thing about Dirty Pair is how remarkably literate it is in its SFnal groundings. There are numerous wink-nod references, occasionally remarkably on-the-nose, to: Dune, Warhammer 40K, Star Wars, The Blues Brothers, the novels of Larry Niven, the Cthulhu mythos, 2001: A Space Odyssey, Alien, The Terminator, Flowers for Algernon. Also, the episodic nature of the show along with the open-world SFnal concept, the competence of the characters, and the comedic chops of the seiyû portraying them, make Dirty Pair versatile enough to successfully riff on everything from spaghetti Western plots, casino capers, sting operations and Indiana Jones-style treasure hunts to high-stakes hostage situations and Agatha Christie-inspired whodunits… all within a surprisingly well-fleshed far-futuristic setting that is nonetheless just dystopian enough to be fun and interesting. 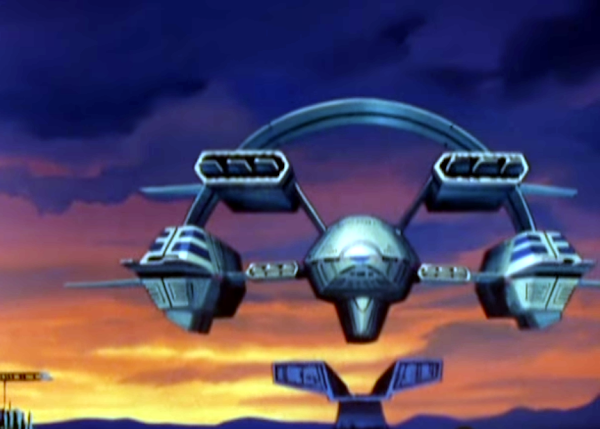 Dirty Pair is occasionally a bit disappointing in its politics (or, I really should say, lack thereof). But there’s no denying at all the iconic and groundbreaking status of the series. It seems to have served as a template, inspiration or even a source of parody in turn for later entries in the animated ‘girls with guns’ subgenre, including: Bubblegum Crisis, Gall Force, Dominion, Burn Up, Gunsmith Cats, Armitage III and Ghost in the Shell.

The 80s nostalgia value for this series is obviously sky-high, and equally so, this is one I wouldn’t recommend to younger viewers. Even though there’s nothing more explicit or pruriently-titillating here than Yuri showing a bit of skin in the shower in one episode, there’s still a lot of innuendo in the girls’ banter that puts this firmly into ‘PG-13’ territory. But the Dirty Pair TV series is nothing if not entertaining, even if it’s the sort of guilty-pleasure entertainment one usually gets from wire-fu Hong Kong buddy-cop comedies and B action flicks. But hey, that’s why you’re here, right? 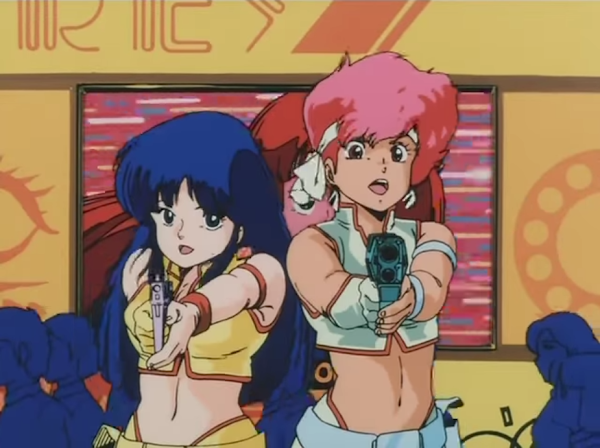