Stylish but sterile: Ghost in the Shell

Remember those good old days when Blockbuster was still in existence? When I was thirteen, I used to go to the Blockbuster in my neighbourhood and browse through the animated titles, and one of the ones that always drew my curiosity, through one of those dusty frosted laminate covers with stickers saying ‘Unrated!’, ‘Anime’, ‘Sci-Fi’ and ‘2-Day Rental’ on the spine, had the topless shoulders and cleavage of a cybernetic girl in shades and a black bob on the front petting a Glock, with the (frustratingly-placed) tagline telling me ‘It found a voice… now it needs a body’. Good times, good times. Oshii’s movie was another one of those big-concept titles that basically defined anime for a lot of early Region 1 fans. Alas, it would be quite a few more years before I got the opportunity to watch Ghost in the Shell all the way through. Also – get this for nostalgia – the copy of Oshii’s GitS that I watched for this review is a retired Ramsey County Library copy, bought for two bucks at Roseville. It still has the bright green ‘7-Day Loan’ and ‘The library is not responsible for damage done to your player’ stickers on the front!

… Ahem. Anyway. Oshii Mamoru’s 1995 animated feature-film version of Ghost in the Shell is for many people the definitive version that introduced them to the brilliant, prescient mind and intricate world-building of Shirow Masamune, the animated forms of whose early works (including Black Magic, Dominion and Appleseed) have already featured quite prominently here on Paneurasianist Weeb. Most of these animated versions, as I hinted earlier in my reviews, don’t do Shirow’s manga any real justice. And unfortunately, it seems that Oshii Mamoru’s film rather continues in that tradition. 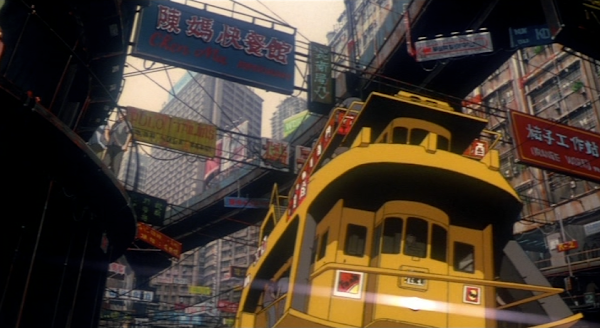 Which is, in some ways, a shame. There’s no denying that Oshii’s film is stylish and entertaining. Oshii’s vision of the Niihama of Shirow’s GitS, which has clearly been inspired by the great sprawling (and towering) megalopolis of the Pearl River Delta, is vibrant and vital, with its simplified Chinese-language storefronts, industrial parks, outdoor markets and busy waterfronts. (By the way, can’t you tell that Oshii lurves him some pupper? I’m serious. Take it from a sketcher – the dogs in those slow, atmospheric city street montages are compositionally-placed to draw the eye.) The animation, with its blend of early CGI and traditional 2D cel painting, may look a tad dated now – but it was groundbreaking for its time: Oshii and the art direction team clearly had no problems pushing the envelope of what could be done with the medium. The character designs – Kusanagi Motoko in particular – and near-futuristic settings, including the indoor cybernetic labs, are all wonderfully put-together.

And any fan of The Matrix should instantly recognise a number of the scenes and settings in GitS: in particular the fight between Kusanagi and the insectoid tank in the natural history museum – a clear inspiration for the infamous ‘lobby scene’. Oshii was as great an acknowledged artistic influence on the Wachowskis as Kurosawa was on George Lucas – right down to the Morpheus glasses that were clearly inspired by Bateau’s ocular implants. The prominently-placed quotes from St Paul’s first epistle to the Corinthians are appreciated and (for what it’s worth) fairly apposite to the point about personality that the lapsed Catholic Oshii is trying to make. But that doesn’t change the fact that Oshii in some rather crucial ways depoliticises Shirow’s Niihama and turns GitS instead into an extended exercise in heavy-handed navel-gazing about bodily alienation. 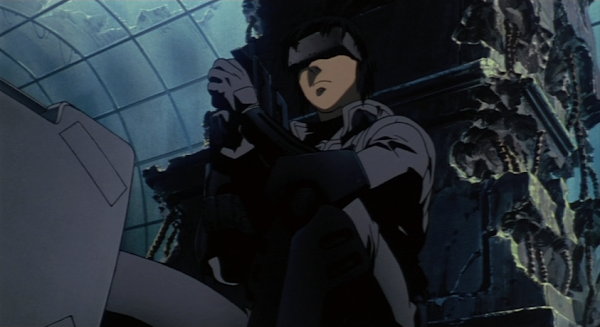 Anyway. The plot of GitS involves a conflict between two sections of the Japanese government – Section 9 and Section 6, the latter of which is linked to the Ministry of Foreign Affairs – and a diplomatic incident which is brewing between Japan and the fictional Republic of Gavel, which is apparently suffering from a considerable amount of political instability and whose supposed ‘peace-loving democracy’ has been the focus of a good deal of cybercrime originating from an elusive hacker calling himself ‘the Puppet Master’. Major Kusanagi Motoko and the agents of the semi-covert, quango-esque Section 9 are tasked with tracking down the Puppet Master, leading them into a confrontation with Section 6 and the MFA. Much of the film involves Kusanagi and her squadmates getting into firefights with people and cyborgs who have been ‘hacked’ by the Puppet Master – given fake memories and hoodwinked into carrying out his objectives. In addition, the Puppet Master appears to be linked to the mysterious Project 2501, which the other branches of the Japanese government clearly don’t want Section 9 to know about…

My biggest problem with Oshii’s GitS is an editorial, philosophical one. Oshii gave up all the fun, naughty, fleshy bits of his early Catholicism in his deconversion experience, and replaced them cybernetically with the driest and most boring bits of mechanistic rationalism. Kevin Berge at Questionable Critics dismisses this as a surface problem of style – and possibly also the voice acting – but I tend to think the flaws run deeper than that. The core conceit of GitS is unreflectively Cartesian, dualistic and idealistic. Oshii simultaneously sexually objectifies Kusanagi (who spends significant amounts of onscreen time in the nude), while at the same time robbing her completely of any kind of sexual agency or desire – something which neither Shirow Masamune in the original manga, nor Kamiyama Kenji in Stand Alone Complex, do to her. This may be part of the point on Oshii’s part, as he clearly wants to push us to think in the alienated way his version of Kusanagi does, who regards her own body as a piece of manufactured hardware detached from her personality. For comparison, please note that this is something Ôtomo Katsuhiro says over and over again – in ‘Construction Cancellation Order’ with Sugioka’s deceased predecessor and in Akira with Tetsuo, Kaori and Kaneda – that we vulnerable, fallible, nervous, squishy bags of blood, meat and organs simply cannot do.

This hard substance-dualist fixation unfortunately also affects the politics of Oshii’s GitS. In focussing so intently on the individual identity crisis of Kusanagi, the gæopolitical and social-SFnal drama which should make up the core of the story actually becomes rather boring filler, almost background noise. The Puppet Master doesn’t, and can’t, make either a very convincing villain or a convincing anti-villain, despite Oshii wanting us to treat him as both at various points in the story. Bateau resolves the main plot with a recitation of all the political moves following Kusanagi’s mind-dive into the PM with all the passion and interest of reading a laundry list. The PM’s ruthless, and heartbreaking, exploitation of a working-class garbage truck driver – literally forging memories of a wife and daughter he never had to get him to commit online crimes – is not only glossed over. Worse: it’s used as a soapbox for Bateau to deliver a high-and-mighty pontification to Kusanagi about how memory is just data, and how one person’s memories are just a tiny drop in an information ocean. (Seriously – up yours, Bateau.) The social inequalities which we occasionally get to glimpse in montage and set pieces but are never allowed to explore, are frustratingly relegated to the background. 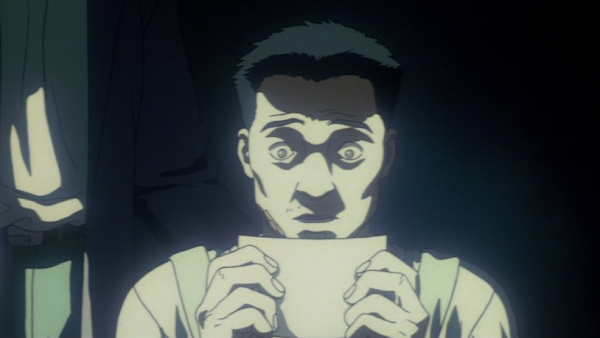 This may be more than a bit contrarian of me, but I actually still hold that the two OVA iterations of Dominion come the closest to reflecting Shirow Masamune’s fascination with the messy, dirty, gritty, fleshy, material social politics of a world which has been dominated by high technology but which hasn’t yet been able to transcend on its own the limitations of human nature. At its very best, this is what cyberpunk itself is all about. (Read William Gibson’s reflections on his visit to Singapore to get an idea of what I’m talking about here.) Oshii understands the æsthetics, and he constructs them with a mastery that I can only applaud. But he’s so focussed on those, and from a deconstructed individualist standpoint, that he misses a significant dimension of the thematics. At the start of the film Oshii promises a drama of technology (slash-mind) conflicting with human politics (slash-body). But he can’t deliver on that promise, in part because he insists so fervently on keeping the one as separate and alien from the other as possible.

At any rate, Ghost in the Shell is still a significant and important film, and one of the indispensable ones when it comes to exploring the medium of Japanese animation. For that reason alone, it’s well worth watching. Just don’t get your hopes up too high when it comes to the story. Although the film oozes style, and for this reason captured the imaginations of Hollywood throughout the late 90s and early 00s, the story feels as sterile and plastic as the main character’s body is. 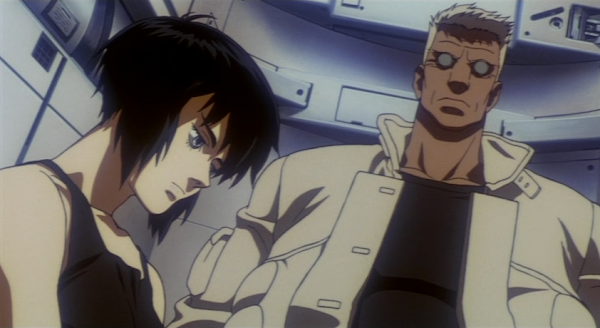