The brilliant satire of Project A-ko 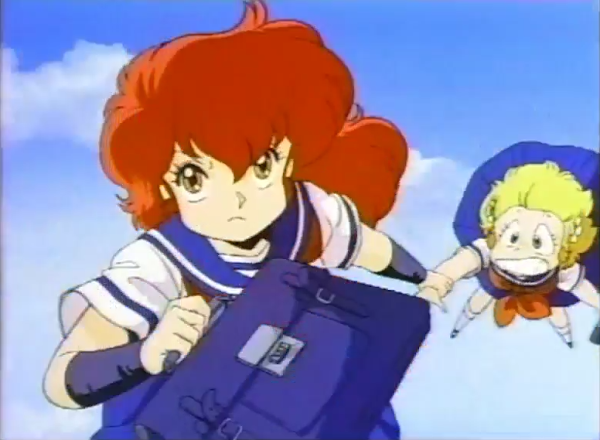 I recently got around to watching Project A-ko, a 1986 Japanese animated feature film which I’m kicking myself that I’d never watched before now. In a word, Project A-ko is sublime. Although it takes its name from Sammo Hung’s nautical 1983 Hong Kong action flick starring Jackie Chan (another hint at how the great Japanese mangaka seem to have a fairly healthy degree of Sinophilia), Project A-ko is much more a spiritual prædecessor to Stephen Chow’s brand of humour (or that of, say, Excel Saga). Although it easily holds its own in the action and mecha genres in its own right, Project A-ko serves as a mostly-friendly satire, chock-full of blink-or-you’ll-miss-it send-ups, wink-nods and Easter eggs aimed at all of the popular classics of Japanese animation of the 1970s and 1980s, such as Fist of the North Star, Space Battleship Yamato and Captain Harlock, Nine: Original-Ban, and, of course, Macross and Gundam – as well as of the general tropes associated with all of these.

The story itself is downright endearing in its simplicity. Magami A-ko is a typical high school girl in a sailor fuku who goes to an all-girls’ school in the city of Graviton (which was destroyed 16 years ago in a freak meteor collision and rebuilt around, and in, the crater since then – coincidence? I think not). She stands out, however, by being red-haired, and by having superhuman strength and speed. Her closest friend is her blonde, button-cute (if occasionally annoying), sweet and innocent classmate Kotobuki C-ko. However, they attend school with snobbish, spoiled, blue-haired mean-girl Daitokuji B-ko and her troupe of hangers-on, who competes viciously against A-ko for C-ko’s affections… much to the chagrin of Ayumi-sensei, the girls’ big-haired, tank-topped, moped-riding teacher. This kindergarten rivalry starts out as innocently as one might expect, with notes of your usual shôjô high school drama or, for example, Saved by the Bell – but it quickly escalates into cartoonish excesses of violence, with B-ko building an increasingly-intricate fleet of mechas, and finally donning a powered-armour bikini complete with missile launchers, to take down A-ko. At the climax of their fight A-ko and B-ko are literally throwing military tanks at each other. Eventually they have to put their differences aside to rescue C-ko when she is kidnapped by an alien battleship. 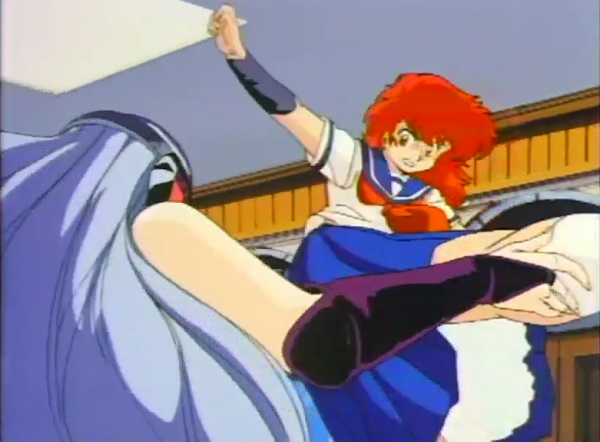 That’s the story in a nutshell. If it sounds like what would happen if a 13-year-old otaku sat down to storyboard an action / mecha anime film: good, Project A-ko can say ‘mission accomplished’. The entire point of the film is to watch superpowered schoolgirls tear up a metropolis as easily as if it were Styrofoam, in what is essentially a playground fight – and it works by being as ridiculous as possible while still having a heart. Even though the whole thing is a send-up of everything that was popular in contemporary anime, it’s clear that Nishijima Katsuhiko was not doing it in a bitter or mean-spirited way at all, and that he was enjoying every minute of, so to speak, playing in the sandbox.

And the thing is: he pulls it off spectacularly. The effort that is made portraying A-ko and C-ko as two relatively normal classmates and friends who like playing together at recess, buying snacks and going to the movies pays off perfectly in contrast to the antics that A-ko gets up to later. The animation is fairly top-notch for a production of this era, and loving minute attention was clearly lavished on the mechas, the tank battles, the martial arts and the aerial fighting. The madcap moments include A-ko and B-ko destroying the school in their tussle, tossing tanks at each other as mentioned before, and A-ko launching herself from a fighter jet and playing high-speed platformer from missile to missile to board the spaceship that’s firing them. The A-ko / B-ko rivalry meshes perfectly with the aliens-versus-humans B-plot, and the two collide and are worked out hilariously. A running gag in Project A-ko, played straight for laughs and invoked in the martial-arts pastiches particularly, is gender-bending: many of the characters who look like male bodybuilders are actually women. One of B-ko’s squad of mean-girls, Mari, fits this trope, as do D and the captain of the alien ship. It’s actually a fairly impressive feat of storytelling that Nishijima and the writing team of Project A-ko manage to keep naturally upping the ante on their own outrageousness for practically the entire second half of the movie. 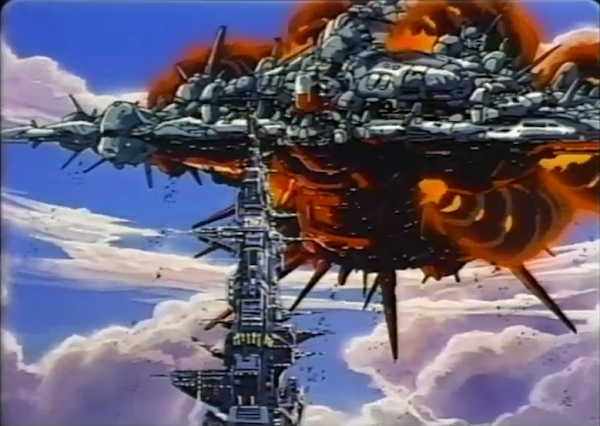 The soundtrack, which consists of synth-heavy 80s pop tunes with English lyrics, adds yet another layer to the retro charm and general camp of Project A-ko. The voice talent is pretty well cast, too, though C-ko’s voice in particular can be a little grating. (There are apparently a few wink-nods in some of the casting here, though I haven’t seen enough old-school mecha anime to pick up on them, it seems.) As mentioned above, the style of humour in A-ko is heavily referential and pop-culture savvy for its time, but the gags are accessible enough that people can ‘get’ the jokes even without having seen what’s being referenced.

Partly on account of it being mostly an action movie, there isn’t as much commentary and topical satire in Project A-ko as there are in the three OVA sequels, which pass snarky judgement on things like government corruption and the greed, cowardice and incompetence of military contractors – mostly in the form of B-ko’s dad Daitokuji and the various generals tasked with saving Earth from an alien invasion. The third and fourth OVAs also take some heavy satirical potshots at the commonplace tropes in shôjô romances with the introduction of the character of Kei, as well as at adventure anime – the fourth OVA features a great big fat old red herring of an ancient Mesopotamian prophecy, when three ‘serious’ archæologists in Iraq uncover an ancient statue and inscription there about C-ko. Again, though, this is a movie that I was kicking myself that I’d never seen before, in part because it’s right up my alley. Project A-ko is a spectacular piece of 80s animation, and its frenetic off-the-breakable-walls action sequences are pulled off with tongue planted firmly in cheek.
Labels: 80s action anime feature films China Japan martial arts mecha OVA satire science fiction slapstick