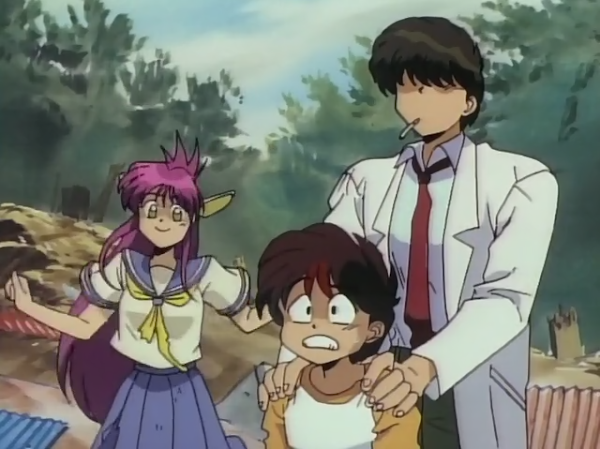 Whew! Another blast from the past, from a time almost out of mind. Again I can almost taste the atmosphere of Four Star Video as I went over the fake-wood shelves and fingered through the plastic sleeves over VHS titles like Bannô Bunka Neko-Musume. Better known in the United States – and to me at the time – as All-Purpose Cultural Cat Girl Nuku Nuku, the six-part 1992 BBNM OVA was another formative experience in my early middle-school exposure to anime.

Nostalgia clearly isn’t everything, though. After reviewing the Project A-ko films, Bannô Bunka Neko-Musume unfortunately pales a little bit. It has many of the same plot points and devices as A-ko, many of the same character types, and an absurdist slapstick sense of humour that is nearly identical. 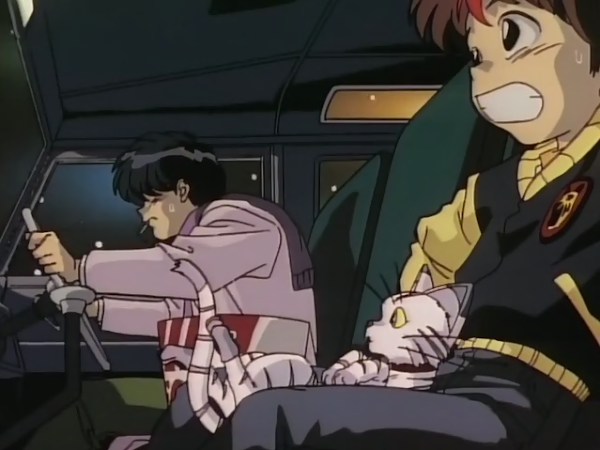 It’s Christmas Eve and a boy (Natsume Ryûnosuke) and his dad (Natsume Kyûsaku) are on the run in their car. The boy stops to take a leak and finds a cat scrounging through the garbage, brings it back to his dad and asks if they can adopt her. However, on account of the android chassis in the back of their car, they are soon chased by a helicopter belonging to Mishima Heavy Industries into a junkyard, and strafed with minigun fire. The boy and his dad escape unharmed, but the cat gets killed. (I think this may be literally the only time in the OVA series that a bullet manages to connect with its intended target.) Kyûsaku, who is apparently a genius in robotic engineering and software design as well as a chain smoker and a bit of an airhead, gives Ryûnosuke a ‘Christmas present’ by designing Natsume Atsuko a.k.a. ‘Nuku Nuku’ – a super-powered gynoid built from the chassis with the dead cat’s personality… and some difficulties adjusting to human society. Aligned against the Natsumes are Kyûsaku’s possessive and control-freakish estranged wife Akiko – the head of Mishima Heavy Industries – and her two aides, Kyôko and Alyssa… and later, by another super-powered gynoid designed by MHI named Amy.

Again, the style and scope of the humour in Bannô Bunka Neko-Musume should be quite familiar to people who’ve watched Project A-ko. It’s good clean fun – slice-of-life character-driven drama interspersed with slapstick cartoon violence involving heavy weapons, armoured robots and multi-million dollar property destruction, which ultimately escalates into a space battle with a superweapon. Nuku Nuku’s ‘bicycle rides’ to school tend to look and feel very similar to A-ko’s early morning dashes, and they show a similar degree of escalation. And the protective attitude that Nuku Nuku takes toward Ryûnosuke is similar – if not entirely analogically identical – to the attitude that A-ko takes to C-ko. The rôles are somewhat reversed, though, in that Ryûnosuke is the more mature between him and Nuku Nuku, whereas A-ko is the more mature between her and C-ko. 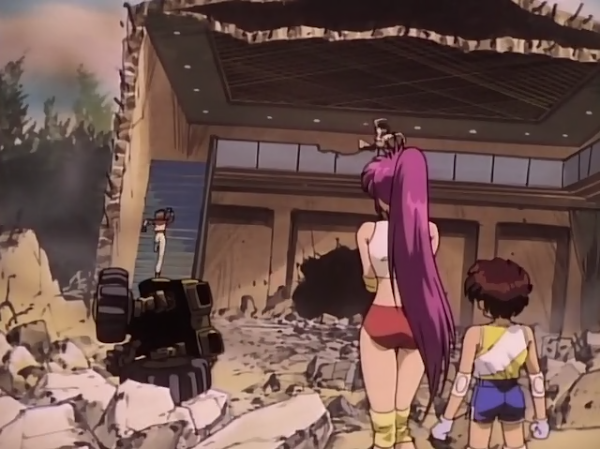 The one thing that kind of sets BBNM apart from A-ko is the family dynamic between Ryûnosuke, Kyûsaku, Nuku Nuku and Akiko. A lot of the comedic value stems from the fact that the ten-year-old Ryûnosuke is actually quite a bit more responsible and understanding than any of his elder relatives, and does a lot of the hard work of trying to get his family to function together. On the other hand, Kyûsaku and Akiko’s relationship is delightfully dysfunctional. The two of them clearly do care about each other – but they express it by trying to get one over on each other at every available opportunity. In the third episode of the OVA Ryûnosuke intimates to Nuku Nuku that his parents aren’t really happy unless they’re firing heavy weapons at each other. And Nuku Nuku, of course, is: chipper, cheerful, innocent, sweet, happy and – like any cat – utterly oblivious to the wanton destruction that she causes simply by being herself in ordinary settings… much to the mortification and exasperation of her male family members.

The inkwork and animation are essentially industry-standard for the early 90s and nothing to write home about. Unfortunately you already see some shortcuts and flattening being taken in how the facial features are defined, for example – bigger eyes, smaller noses, simpler jaws. (There’s a reason why I’m an old-school otaku for this period rather than the 00s or the 10s – speaking in general terms the artwork is simply better in older stuff.) As in A-ko there’s quite a bit of fanservice to be found here, including a bathhouse episode. Even so, the character designs are still visually clear and distinct, and there’s nothing wrong with the art style if you’re just looking for the comedic value. 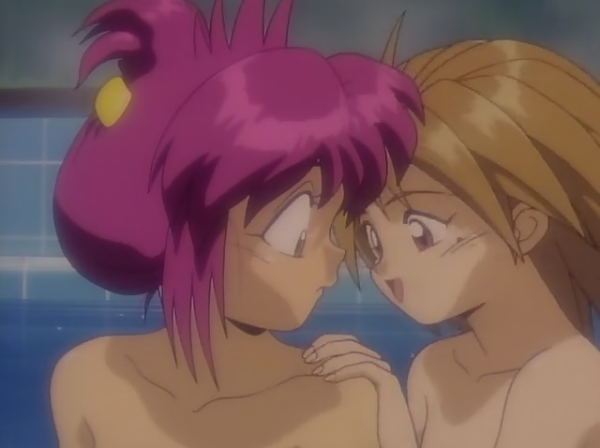 On the other hand, the voice talent is truly stellar. Nuku Nuku is voiced by the matchless Hayashibara Megumi of Slayers and Cowboy Bebop fame, who got her start playing Ume, one of B-ko’s mean-girl squad, in Project A-ko. She went on to land other small rôles in Maison Ikkoku, Bubblegum Crisis and City Hunter before getting to portray female Ranma in Ranma ½. As in Ranma, Megumi clearly gets to flex her formidable comedic timing and delivery muscles here, too, as the title character.

And she clearly gets to work with people who can keep up with her, too, which is always fun to watch. Shimazu Saeko (the voice actress of Yuri from Dirty Pair) is nothing less than superb as Akiko, and variously gets to chew scenery, turn on waterworks, deliver haughty monologues (complete with that signature mean-girl laugh), and hams everything up with delightful abandon. Kamiya Akira’s and Ikura Kazue’s voices are also both instantly recognisable if you’ve ever watched City Hunter. Kamiya having voiced the similarly-comic Saeba Ryô throughout that show’s entire run, he’s clearly in his natural element as Ryûnosuke’s brilliant-but-irresponsible genius dad; and Ikura (Ryô’s partner / main love interest Kaori in City Hunter) as Ryûnosuke, holding it all together and delivering some nice deadpan zingers of her own as the straight man to everybody, fits perfectly into this schema as well. It’s a fine testament to the quality of the voice acting and the quality of the writing that, despite these characters all being caricatures and flawed in varying degrees, all of them manage to show genuine and sympathetic sides.

With Bannô Bunka Neko-Musume, your mileage may really vary. It’s certainly not for everyone. It’s definitely aimed more toward younger viewers who like this kind of over-the-top situational and slapstick humour. If you love A-ko, Dominion, Dirty Pair or Slayers (which I do), BBNM will be right up your alley. On the other hand, if you’re looking for more serious fare, give it a solid pass. 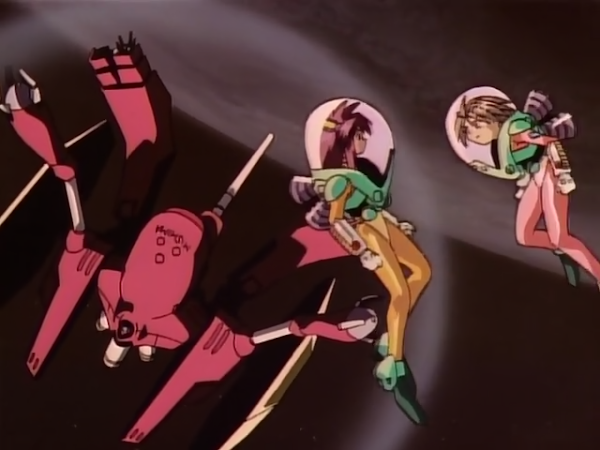