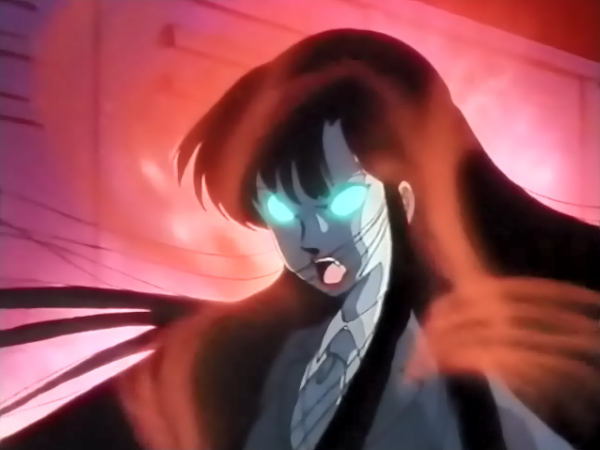 So… here we have the last of the Shogakukan OVA one-shots based on the Rumic World manga: Laughing Target. This is probably the first of Takahashi Rumiko’s animated works that I actually watched – again, courtesy of Four Star Video in Madison, when I was twelve or thirteen years old. It was released in 1987, just one month before Wicked City, and it represents Takahashi Rumiko’s first foray into supernatural horror and urban fantasy. It is also one of Takahashi’s darker, more ‘serious’ works; apart from a bit of the banter between Yuzuru and Satomi, there is very little of the Queen of Manga’s signature rom-com humour in this story. Watching it again now, I wondered how it would hold up against my memory.

Laughing Target is the story of two cousins of the dying Shiga clan, Yuzuru and Azusa, who were betrothed to each other by Azusa’s mother when they were children. After Azusa’s mother suffered a mysterious demise, Yuzuru’s father invited Azusa to come to live with them. Although Yuzuru has nearly forgotten about the betrothal – being a popular athlete on his high school archery team, with a cute girlfriend named Satomi – Azusa certainly hasn’t. And although she appears to be a frail, shy and vulnerable beauty, Azusa quickly shows how determined she is to have Yuzuru for herself, by fair means or foul. Satomi begins to have mysterious ‘accidents’ and brushes with death. She knows perfectly well that Azusa is behind them, but given how inexplicable these ‘accidents’ are, she is at pains to convince Yuzuru of Azusa’s involvement… before it’s too late. 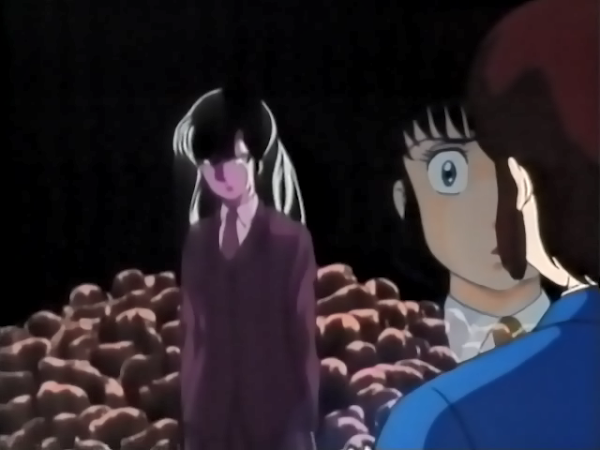 So, one of the things that I noticed first about Laughing Target is how restrained it is for a horror anime from this era. Even though this is literally Takahashi’s first rodeo in the genre, she doesn’t make the mistake of showing us too much… a shadow here, a trickle of blood there, a sudden arrow shooting out of the darkness on its own, or Satomi’s image in an old photo beginning to vanish. She certainly understands quite well how to build and maintain suspense, and how to get a creepy reaction without relying too much on gore or bodily dismemberment. Takahashi actually relies much more on atmosphere and timing to drive the suspense.

Takahashi also toys a bit with our expectations to begin with, using her experience in drawing sports anime and high school romances to set up Yuzuru and Satomi’s relationship, giving it a bit of weight first. It’s intriguing that she uses archery as Yuzuru’s sport of choice, instead of, say, kendo (‘One or Double’), rugby (‘Winged Victory’), baseball (‘The Grandfather of All Baseball Games’) or boxing (‘Excuse Me for Being a Dog!!’, One-Pound Gospel). This is a traditional reference to the Analects, actually, and it’s meant to establish Yuzuru’s character as an honourable gentleman who doesn’t contend with others. Azusa takes advantage of this trusting, gentlemanly aspect of his character as she terrorises Satomi. 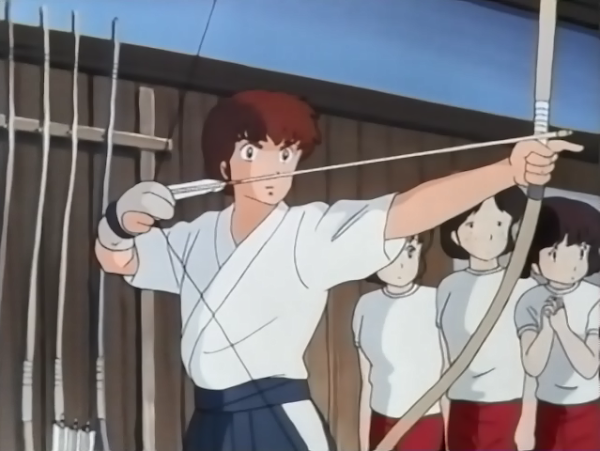 Another thing about Laughing Target from watching it this time, that I hadn’t quite ‘connected’ before, was the significance of the ‘hungry ghosts’. In Chinese folk religion and the Dharmic religions, ‘hungry ghosts’ (Chinese: egui 餓鬼; Japanese: jikininki) are the reincarnations of people who died with deeds like murder or adultery on their karma. They are spirits driven by insatiable hungers for offal or human flesh. In the manga, it is deliberately left as an open question at the end, whether the hungry ghosts were drawn to Azusa because of the demonic curse on her clan, or if they actively corrupted her and drove her to murder. The OVA offers more of a definitive answer to this question, although in the end it’s still left up to the viewer to decide whether or not Azusa was a victim or a villain. But I remember at the time some English-language reviewers had a problem with the ‘hungry ghosts’ as an unnecessary addition to the story; instead, I think they were a creative flourish, grounding it in a mythological referent that East Asian audiences would readily understand. It’s noteworthy that a lot of references to Buddhist mythology are made more explicitly in InuYasha, in a way that certainly carries over from here.

Azusa was also probably one of the foremost prototypical examples of the yandere trope in manga in the 80s. Toward Yuzuru – normally – she is expressively sweet and demure. But she’ll also literally rip the throat out of the neighbour’s dog to send a message. (And bearing in mind how much of a dog person Takahashi-sensei is, that means she’s bad.) It’s a bit of an unfortunate writing choice, how long it takes Yuzuru to put two and two together regarding Azusa’s character. But given that she’s his cousin and that he likes her (even if not in a romantic way), that’s a writing choice that can perhaps be excused. 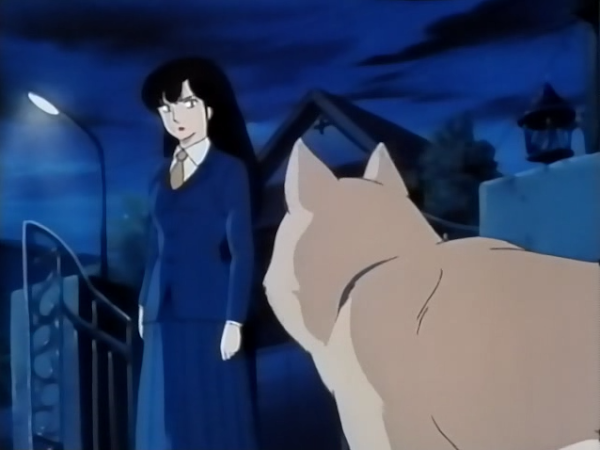 Laughing Target is effective as an old-school supernatural thriller: the pacing is good, the suspense is kept taut throughout, and there are no extraneous diversions. But this isn’t to say that it doesn’t have certain problems. Even for a fifty-minute OVA one-shot, it’s a pretty slow burn. Even though the palette, with its deep blues and bright reds, is well-chosen and adds to the atmospherics, the inkwork is basic and the animation is still fairly clunky at times, giving the production a bit of a cheap look. Even though the chittering vermicular hungry ghosts are suitably creepy, they seem to be overused at certain points. Also, there are certain points in the story when the blindness of Yuzuru to his cousin’s doings against Satomi seems a bit forced and convenient.

Still, for 1987, Laughing Target does hold up fairly well – certainly better than The Supergal or even Fire Tripper. The musical numbers, even the instrumental ones, are well-chosen and evocative. In a supernatural horror title like this, it all comes down to the atmospherics – and this straight-up hits the bullseye on the atmospherics… er, so to speak. It’s kind of unfortunate that not as much attention was paid to Takahashi Rumiko’s earlier short work in Rumic World and Rumic Theatre, and also that the laserdisc OVA market dried up toward the end of the 80s, because she clearly had a lot of other stories that would have been well-suited to this medium. It may just be the nostalgia for the heyday of Four Star talking, but even though parts of this trilogy have not aged well, Fire Tripper, The Supergal and Laughing Target still manage to recapitulate the creative energies and exuberance of an entire era of Japanese animation – an energy and exuberance that is now primarily seen in the K-drama and C-drama markets. 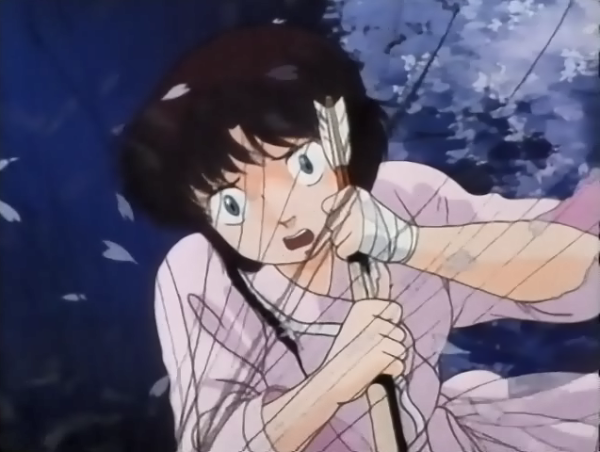