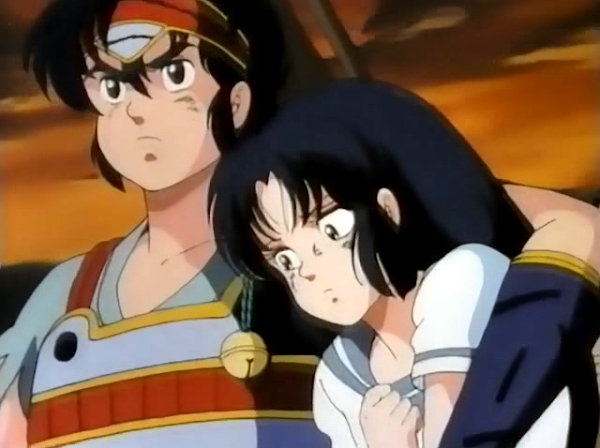 If you’re familiar at all with C-dramas – and I do mean at all, because these things are freaking ubiquitous – then you are certainly aware of the entire sub-genre of the time-travel period romance. Titles like The Myth, The Legend of the Swordsman, Love Weaves Through a Millennium, The Journey and The Eternal Love seem to have an enduring popularity in the Sinosphere. American film has done this as well – for example with Highlander and Kate & Leopold. But these time-travel dramas in East Asia – particularly Mainland China, Taiwan and Korea – are rooted deeply in a tradition of online self-publishing and fanfiction (my wife reads a lot of online novels); and the trope of a modern girl travelling back in time and falling in love with a man from the past is one of the most enduring and popular subgenres of East Asian fanfiction. (EDIT: As my wife tells me, the prototypical example of this genre in Chinese television and film was the 2001 Hong Kong series A Step into the Past, which was in turn based on a wuxia novel by Huang Yi.)

The chief trendsetter here, at least as East Asian cultures go, seems to have been none other than Takahashi Rumiko, as witnessed by the sheer monumental popularity of her manga series, and the subsequent animated TV adaptation, InuYasha. InuYasha was one of the most popular subjects for fanfiction among otaku in the 1990s; it therefore stands to reason that its popularity influenced the entire milieu of East Asian time-travel romance fiction, including the modern C- and K-dramas. But InuYasha, successful as it was, was in fact a remix of several different storytelling and thematic formulas which Takahashi-sensei had floated with varying levels of success. The Buddhist-inspired occult, gore and body-horror elements of InuYasha build on the successes of ‘The Laughing Target’. The trope of a cursed boy trapped in the body of a dog can be seen in the comedic ‘Excuse Me for Being a Dog!!’ and (with a couple of twists) in the more dramatic ‘Sleep and Forget’. And, of course, the idea of the modern girl travelling into the past and falling in love with a boy there was first explored in Takahashi-sensei’s corpus in ‘Fire Tripper’, which was made into a laserdisc OVA one-shot by Shogakukan in 1985. 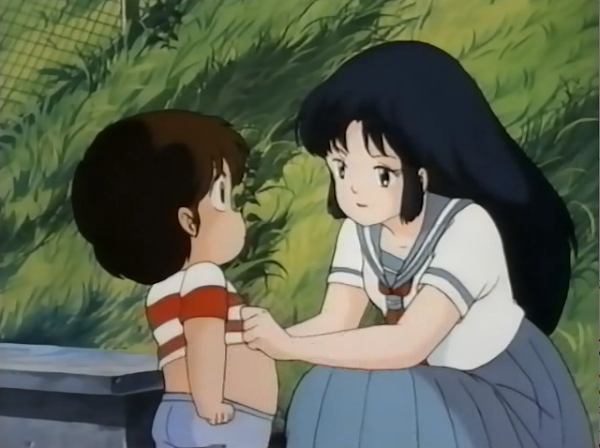 Fire Tripper tells the story of Suzuko, a high-school junior who comes to take her neighbour’s six-year-old kid Shûhei home from the playground. The two of them are caught in a massive gas explosion. Suzuko is flung back in time to the sengoku jidai, a period of anarchy and warlordism which compasses roughly the late fifteenth through early seventeenth century Japan. She lands on a battlefield where several soldiers belonging to the warlord Red Horse try to rape her; and she is rescued by a young villager named Shukumaru. After learning that Shûhei was flung back in time as well, she attempts to find the young boy even as Shukumaru makes several clumsy attempts to romance her. Suzuko eventually figures out that she and Shûhei are caught in a time loop which is triggered by fire – the two events linking the past with the present being Red Horse’s raid on Shukumaru’s village, and the gas explosion in the present. Her feelings for Shukumaru began to deepen and conflict as she realises that the two of them are tied more closely together than she first thought.

In a number of ways – not least through the explosion of fanfiction and online novels that has spurred the popularity of the time travel drama in Korea and China – watching Fire Tripper is like peering into a time capsule. There is a clear focus on the differences in garb – modern vs. sengoku. Many of the themes and questions and commentaries that crop up in the modern group of Chinese and Korean time-travel dramas, which often have to do with (mistaken) identity and historical consciousness about ‘where we come from’, also appear prominently in Takahashi-sensei’s work here. The comedy of manners between Shukumaru and Suzuko in the early part of Fire Tripper whimsically casts light on how modernity has changed the Japanese character. Takahashi holds herself remarkably aloof from commenting on which one is ‘better’, but instead takes pleasure in showing the limitations, flaws, quirks and strengths of each. Shukumaru’s manners are coarse, loud and brash. His attitude toward women in particular is fairly brusque. He is hot-tempered and literal-minded. He is not concerned with questions of ‘why’ and ‘whether’, but is instead focussed – as he must be in order to survive in a village beset by psychotic warlords – on what is here and now in front of him. Of course Takahashi doesn’t always portray these things sympathetically: as when Shukumaru, egged on by his friends in the village, drunkenly tries to molest Suzuko. But she lets us gradually come to appreciate Shukumaru’s acts of kindness and compassion for the people around him, which are very rarely expressed in the ways which modern Japanese people would consider as ‘polite’ or ‘nice’.

Suzuko’s ‘modern’ way of looking at things is – naturally – also ours, and so it’s interesting to see the ways that Takahashi occasionally tries to turn the lens back on her. There’s something of an interesting rôle-reversal that happens when the village women remark on how ‘silent’ and withdrawn she is – as if she’s making something of a comment that modern women are in some ways more constrained, more socially-conditioned and less liberated than women of former times, who work communally and must be independent-minded and practical in order to survive. Definitely there is some prefiguration here of, in particular, the women of Iron Town in Princess Mononoke (which is set a bit earlier than Fire Tripper, in the Muromachi period). Takahashi also gives us two of her signature plot twists near the end, which again flips the lens between modern and ‘period’, as we discover that neither of the main characters are who they seemed to be from the start, which leads to a bit of an awkward quasi-incestuous Poppy Hill moment where the two protagonists think they might be brother and sister, but continue with the romance anyway. 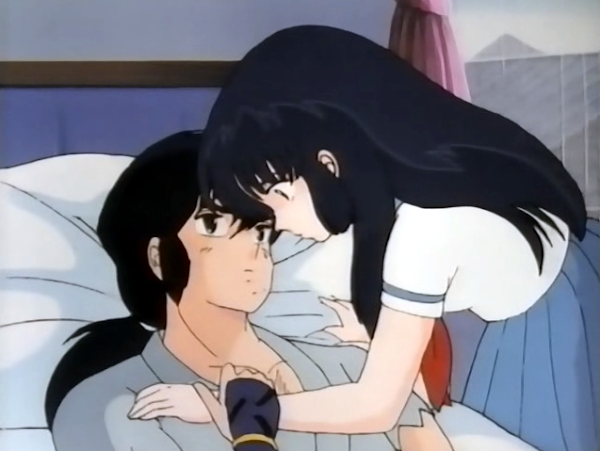 It’s interesting to see how Rumiko Takahashi also focusses on dress – clothes and armour – in Fire Tripper. Indeed, Shukumaru helping Suzuko sort through the sengoku-period women’s clothes taken by the villagers leads her to discover Shûhei’s old T-shirt, sparking her quest to find him in the past. Takahashi uses the sengoku clothing to symbolically convey: protection, chivalry, sense of identity, and ultimately vulnerability and affection. Suzuko’s sailor fuku, which is normally a uniform and therefore a symbol of conformity, serves in the sengoku jidai setting to set Suzuko apart, as an outsider. The young Suzu’s pink period garb attests to her innocent young love for Shukumaru, and Suzuko’s adoption of sengoku garb at the end of the OVA recapitulates her willingness to stay with him in the past.

I haven’t really mentioned the action sequences yet. That’s because they’re pretty damn clunky, even for 1985. The animation of the fights with horses, blades and spears between Shukumaru and Red Horse’s men is slow and wooden, and even the all-important fires of the explosions and battle in the past are animated with inconsistent quality and articulation. In fact, the still splash inserts sometimes seem more dynamic and exciting than the actual animated fight scenes. This sadly isn’t too uncommon for OVAs from this era, but it’s noticeably bad in Fire Tripper: if you’re making a story about the sengoku jidai, you want to make sure you splurge a bit on making sure the bladework, horse archery and so on looks pretty. Shogakukan clearly did not do this. 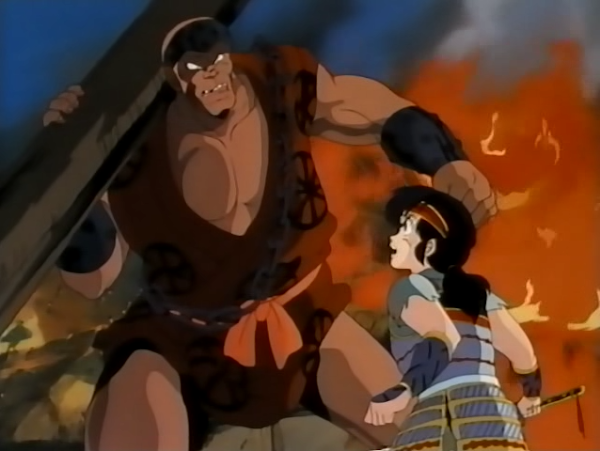 On the other hand, Fire Tripper is a sincere, moving and tightly-told story, even if it does seem a bit predictable now in hindsight. It speaks highly of Fire Tripper that it won Takahashi Rumiko’s wholehearted approval as the author of the original manga on which it was based. The OVA uses its 50 minutes in an effective and engrossing way, never feeling either padded out or rushed. The romance between Suzuko and Shukumaru flows naturally from their characters, and even their first awkward and brusque interactions carry with them an undertone of care and sympathy which grows and blossoms organically.

It’s also fun to watch Fire Tripper while keeping its legacy in mind – not just InuYasha but also the entire plethora of C- and K-drama time-travel period romances which, wittingly or not, took Fire Tripper as a template. In keeping with Takahashi’s class concerns and preference for the underdog, it’s part of the charm of Fire Tripper that Suzuko falls in love and finds happiness with an ordinary boy from a poor village instead of, say, meeting a daimyô and getting involved in the power politics of warlords, samurai and courtly clans. Watching it in 2021, Fire Tripper still very much holds up in terms of quality. 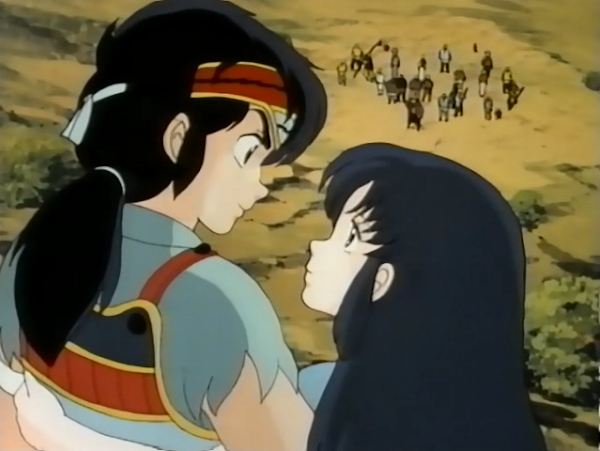