Being poor and hating it: The Supergal 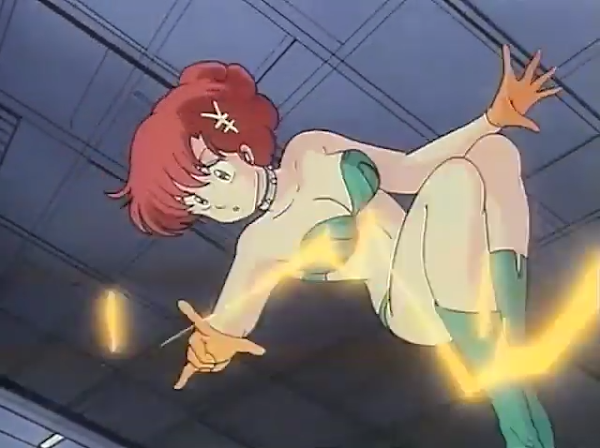 It may have come to the attention of my readers particularly after my review of Maison Ikkoku back on THAO, but I’m actually a fairly big fan of Takahashi Rumiko. I collected the old tankôbon volumes of Ranma ½ and InuYasha, of course, and I perused One-Pound Gospel in the local library when I was in middle school. But my favourites, far more so than the infamously long-ass rom-com and fantasy series that she did, were her short pieces: the ones that were part of her Rumic World and Rumic Theatre anthologies. Of these, three of Takahashi’s manga shorts got adapted into OVA one-shots during the 80s, along with One-Pound Gospel: Fire Tripper, Laughing Target, and… The Supergal.

The story follows the woes and travails of Maris, a security contractor with the Space Patrol who is constantly broke and in debt. The reason for this is inevitably on account of her superior physical strength. As a native of the high-gravity dead planet of Thanatos with six times the strength of an average human, Maris constantly finds herself inadvertently breaking things and having to pay damages. She is accompanied in her quest by her pilot Fox McCloud Murphy, a nine-tailed fox with shapeshifting abilities which he mostly uses to annoy and mock Maris. Maris’s problems appear to be solved when her boss sends her after Matsushita Koganemaru, a yellow-haired bishônen whose father happens to be one of the galactic power elite’s most influential billionaires – and who has been kidnapped for ransom. Maris hopes to rescue Koganemaru, win his gratitude and marry him to solve her money problems, but it turns out that Koganemaru’s kidnapper also happens to be a supergal, and one that Maris knows personally… 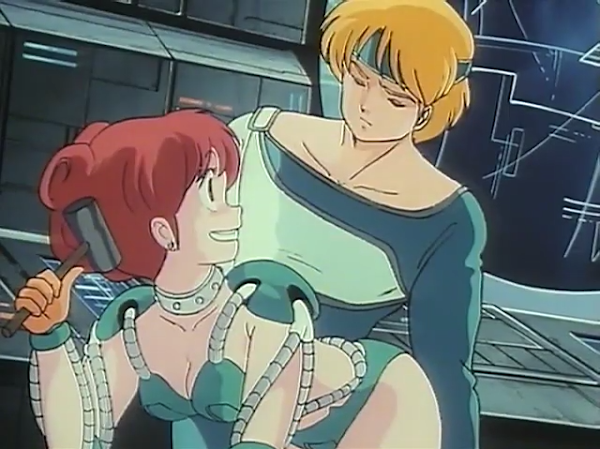 The Supergal, much like the eponymous character, is really kind of the poor girl and redheaded stepchild on the block among the 80s Takahashi Rumiko OVAs. She’s not as atmospheric and brooding as Laughing Target. She’s not as high-concept as Fire Tripper, and doesn’t have the same elements of burning action and smouldering age-gap time-travel romance. She doesn’t even have the personal redemption arc of One-Pound Gospel. The Supergal OVA flies in a rusty secondhand ship of borrowed light-SFnal, cyberpunk-adjacent and slapstick elements borrowed and cobbled together from Dirty Pair and A-ko. She has too little plot to go around, so she tries to hammer and stitch it out to cover a 48-minute runtime, just to get the creaking, clanking OVA into the next port. I’m stretching this metaphor out to its limit myself, it seems…

There is one endearing quality to this title, and that is its class politics. As I’ve said before, Takahashi Rumiko does have a certain Sinophile streak and æsthetic love for things Chinese that shows up most prominently in Ranma, but also as a major background influence in Maison Ikkoku, whose rom-com roots and character inspirations at least partially lie in the popular traditions of Chinese opera. Takahashi’s very earliest work, the Rumic World-featured late 70s SFnal shorts ‘Those Selfish Aliens’, has a punchline that taps directly into the concerns of the anti-nuclear and pacifist contemporary Japanese left, while skewering the machinations of superpower politics and the logic of mutually-assured destruction. Takahashi’s class politics show up a bit less frequently and in a bit more subtle ways. In general she tends to sympathise with underdogs (sometimes literally, as in the case of ‘Excuse Me for Being a Dog!!’), and pit them against the rich and powerful. But she occasionally makes forays into left-wing œconomic commentary with shorts like ‘Time Warp Trouble’, which actually treats with a mixture of humour and gravitas questions of food sovereignty and the self-destructive tendencies inherent in the capitalist production and distribution of food. 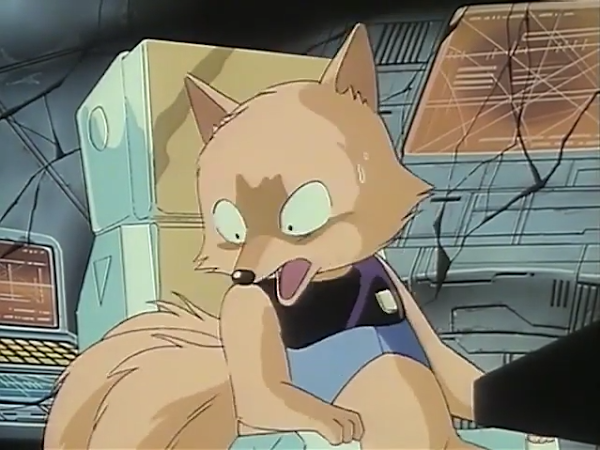 ‘StarFox team to Fox McCloud: your circuit’s dead, connexion down…’

The Supergal is more of the former, ‘Excuse Me for Being a Dog!!’ type. That is to say, Takahashi isn’t soapboxing here but trying to tell a humorous story of a super-strong girl – actually, two of them – who’s desperately struggling against her financial situation in despite of that strength. The manga short is actually directly contemporary with the Dirty Pair light novel series, both of which came out in 1980; and the OVA and the Dirty Pair anime series both came out in the mid-80s. It’s hard to say if they were influences on each other, but the two of them are quite similar and deal with very similar motifs: pretty girls who are also pro wrestlers who become police contractors in outer space; who cause massive amounts of collateral damage with their antics; and who also have a comically-antagonistic relationship with their bosses, out of whom they constantly try to get more money and vacation time. The differences are primarily those of emphasis: The Supergal is a bit more actively sympathetic to its own heroine’s poverty and exploitation (even if it uses the same for more comedic effect) than Dirty Pair is.

In terms of artistry… both the potentials and the weaknesses of the one-shot laserdisc OVA format so common to this era are showcased here in spades. There are a few impressive sequences, like the opening dogfight and scenery-wreck in the cargo bay, which were intricately penned, inked, framed and animated, with an exquisite use of space and composition. The way we are introduced to the restraint-harnessed, bikini-rocking Maris is pretty awesome (and she’s not hard on the eyes, either!) – the idea was clearly to wow the viewer with technical skill, kickass action and so on within the first five minutes. Sadly, The Supergal evidently did not have the resources to follow through. As a result, the beach sequence (despite the panoply of alien diversity and the delightfully-dark visual humour) looks and feels cheap, as does the desert montage set to a synth-heavy 80s ballad (the OVA soundtrack is also fairly standard-issue for the time), and the final showdown at the villains’ prefab base. The flashback sequences of the destruction of Thanatos, although they do provide a bit of context for Maris’s struggles and give us a bit more sympathy for her as a character, are needlessly repeated at the end to pad out time. 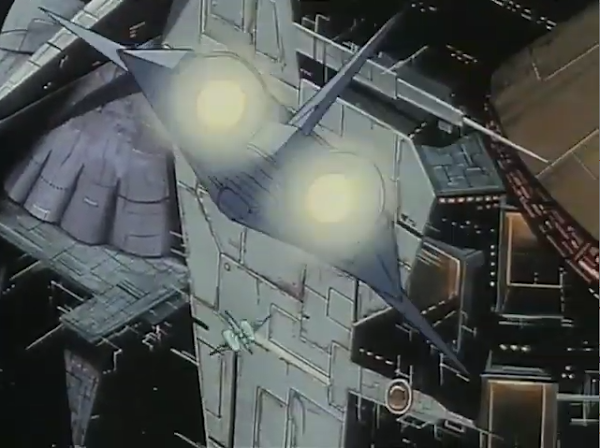 This is as good as it gets, animation-wise.

The thing is, though, despite its manifest technical and storytelling limitations, I really can’t hate The Supergal at all. That’s in large part due to the nostalgia value it still evokes for me, sneaking my Rumic World tankôbon anthologies into my backpack to read during lunch and recess periods in seventh grade. And it’s also in large part due to Takahashi’s satirically-sympathetic treatment of the very real costs to being poor – and the also satirically-sympathetic portrayal of poor people as having to worry about money in ways that rich people do not.

Later on in this blog, I’m sure I’ll also be reviewing the other, better-loved Takahashi Rumiko OVA one-shots from the 80s: Fire Tripper, Laughing Target and One-Pound Gospel. I did want to start with this one, though, The Supergal being the (not groundlessly) least appreciated and most criticised. Despite these limitations I didn’t really want to let it go unmarked for its charms. The Supergal showcases both Takahashi’s strengths and her weaknesses as a storyteller, both her versatility and her overuse of certain styles of humour. It also captures a certain zeitgeist in 80s OVA animation, which itself has some value. 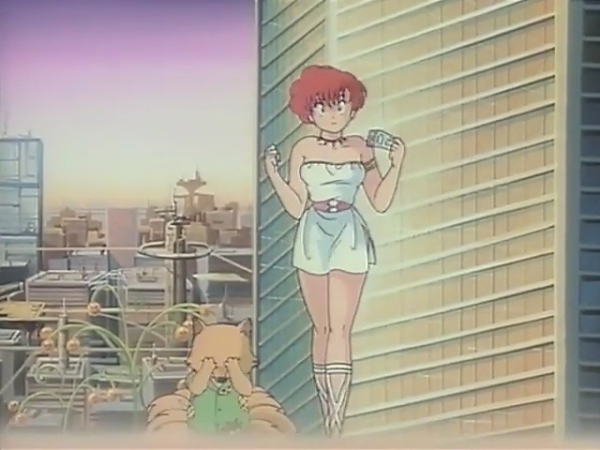