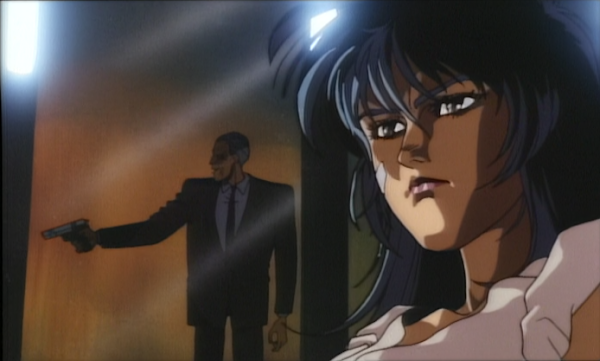 This post is going to get fairly polemical fairly fast, so just keep that in mind. It’s not my intention here to take down Aikawa Shô and Itano Ichirô or cancel-culture relegate them and all their works to the outer darkness. I own both Fullmetal Alchemist and Twelve Kingdoms, both directed by Aikawa Shô, and am a huge fan of both of those works, as well as of Martian Successor Nadesico, which I watched in college. I’m also a fan of Mobile Suit Gundam and Macross (though those are a bit bulky to fit on my shelf), which Itano Ichirô worked on as a particularly brilliant and innovative animator. But we need to remember that both of these guys produced a steaming heap of full-blown fascist propaganda in 1988 (complete with positive references to Western occultism and The Protocols of the Elders of Zion), when they co-wrote Angel Cop. More importantly, we also need to understand Angel Cop as a bellwether and as a symptom of a set of fascist attitudes common to the right-wing ruling class and ruling parties in Japan, which are unfortunately growing more common in the present day and in the broader society.

See, the most common responses among old-school otaku like yours truly when you hear about Angel Cop, are along these lines: ‘It’s so bad it’s good!’, ‘Aww man, the dub had some of the worst dialogue ever – it’s hilarious!’, ‘You can’t take that shit seriously, man.’, ‘Those guys probably never even saw a Jew, they didn’t know what they were talking about.’ For what it’s worth, these reactions do have some merit. It’s an unavoidable truth that Angel Cop really is unintentionally hilarious, and it’s even funnier because it completely lacks a sense of humour about itself and demands to be taken as some kind of serious political commentary.

This common attitude you see that ‘it’s bad, but you can’t take it seriously’ is therefore three-quarters right. Angel Cop certainly is, artistically speaking, an utter turd. The animation is subpar even by 80s standards. It’s preachy, it’s turgid, it’s convoluted, and even the outrageously terrible dialogue and the psychopathically bloody violence and blown-apart bodies on display can’t save it from the cardinal sin of being boring. (In general, it’s not a good idea to drop your expositional dialogue in the middle of action sequences.) On a certain level, it can’t and shouldn’t be taken seriously, and you really can’t help but laugh at it. But on another level, as an object of analysis, it is unintentionally revealing.

Consider first off, that Angel Cop is basically the polar opposite of what Masamune Shirow was going for with Dominion and Ghost in the Shell, despite the noted surface similarities between Major Kusanagi and Angel. Again, I will note: Masamune Shirow is on record as saying the reason he got into drawing manga was because he thought Macross (which Itano was working on) and Matsumoto Leiji’s space operas were too nationalistic, and so he ended up drawing a bunch of near-futuristic cyberpunk works which mercilessly lampooned nationalism and the vigilante-cop mentality. Dominion shows you cops torturing people and expects you to laugh at how messed up and morally compromised they are. Angel Cop shows you cops torturing people and expects you to cheer. 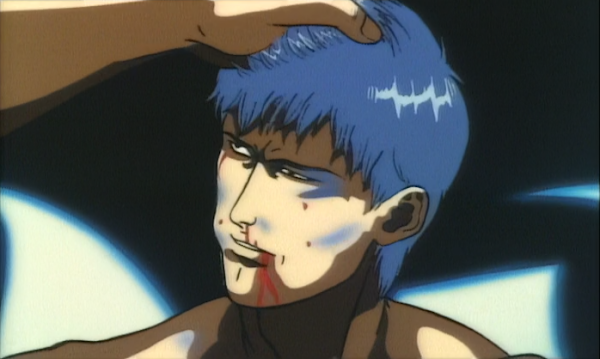 Angel Cop is basically to Ghost in the Shell what Norwegian black metal is to Venom, to borrow the analogy put forward by the excellent Mark Ames. Venom put on a Satanic act as a way to get laughs at the expense of conservative, white, mainstream society. Venom’s Norwegian fans thought they were serious and became literal Satan-worshipping gore-obsessed occult Nazis. That’s basically what happened here: Itano and Aikawa didn’t get what Masamune was doing, so they responded by becoming the very thing he had set out to mock. Itano and Aikawa became the anime equivalent of Burzum, complete with Burzum’s politics and fascinations with gore, bodily fluids, racist-Satanic interpretations of Indo-European mythology and the occult (the names of the Hunters and the connexions to tarot), but without any of Varg Vikernes’s actual artistic talent. Or his conviction to actually, you know, go out and murder people.

So here’s the core of my ‘beef’ with Angel Cop. It reflects a certain paranoid attitude, common among Japanese nationalists both then and now, that Japan would and should be at the top of the world heap. And the reason that Japan is not at the top of the heap isn’t something that might make sense – say, resource scarcity, or anti-family labour and tax policies. No, it’s because there is an international conspiracy to keep Japan down. And guess who all’s leading that conspiracy? Uh… (((who else, man)))?

This is still a narrative and a view of the world which has significant currency among the uyoku dantai, the groups who were – at least in the 1980s – at the far-right fringe of Japanese politics. Angel Cop’s editorial perspective (which it stops bludgeoning you over the head with only long enough to show a character’s head being, uh, bludgeoned or shot to pieces or burned to a crisp or blown apart from the inside) perfectly reflects the priorities of the uyoku dantai. The common threads are: an emphasis on territorial revanchism; a military buildup including in the police forces; historical revisionism particularly over Japan’s war record and atrocities in Asia; Japanese identity politics; and an aggressive posture against Japan’s neighbours (Russia, China, the Philippines).

Angel Cop argues for all of these things, especially the need for the militarisation of the police and the idea that the rule of law makes Japan weak in comparison to its neighbours. Military buildup, unaccountable police structures, torture and licence to kill are all justified because they make Japan stronger. Internal critics of Japan should be ruthlessly silenced by vigilante actions. The anxieties about territorial encroachment – in this case Hokkaidô – are voiced unironically. The inward logic of the SSF is unapologetically social-Darwinist: the weak (including children as hostages) should die so that the strong can survive. The argument is unironically put forward that cybernetics should be used to create super-soldiers like Raiden and Angel. 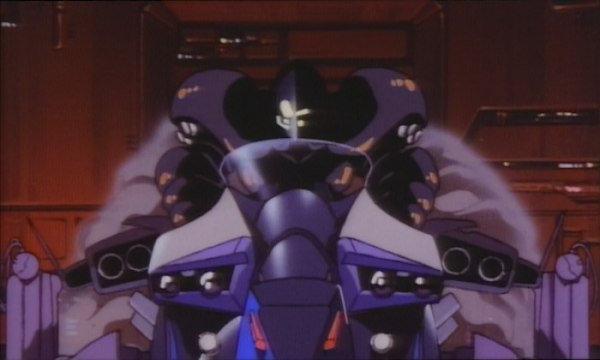 On the other hand, Raiden does get a pretty sweet ride.

In many ways (not just artistically), Angel Cop is very much a product of the eighties. It’s worth remembering that the largest uyoku dantai group currently in existence, the Japan Conference, was created in 1997 from a merger of two smaller groups. The Society for the Protection of Japan, founded in 1974, was largely a Shintô extremist group. The other and larger of the two, the National Conference to Protect Japan, was founded in 1981, was more military in character and was more focussed on changing the Japanese constitution in a more militarist direction. The foundations of these groups actually coincided with an uptick in right-wing political opinion that was happening globally.

The reason why we need to be talking about Angel Cop and the uyoku dantai now, though, is that this anti-human, social-Darwinist, far right wing actually controls the Japanese government these days as part of the ruling ‘Liberal Democratic Party’. The recently departed Prime Minister Abe Shinzô is, after all, a member of the Japan Conference – and in office he has done a lot of the laundry list items that the far right wants, including promoting the remilitarisation of Japan’s constitution, litigating land disputes in the Kurils and in the South China Sea, denying Japanese war crimes, promoting historical revisionism in schools, and criminalising vast swathes of political dissent in the name of anti-terrorism and anti-conspiracy. (The SSF would approve!) Current Prime Minister Suga Yoshihide is unfortunately cut from the same filthy rag as Abe, also a member of the Japan Conference, and is committed to exporting Japanese arms to Southeast Asian countries. 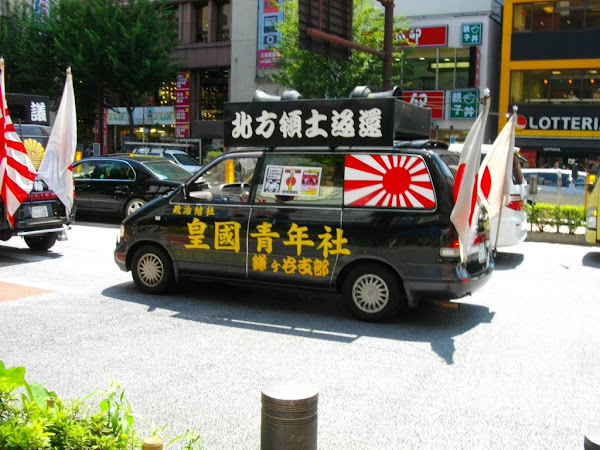 Bringing the focus away from current events and back toward Angel Cop. I’m not too sure about Itano Ichirô, as I haven’t seen much of his other directorial work. But I honestly think it’s possible to interpret Fullmetal Alchemist and (more directly) Fullmetal Alchemist: the Conqueror of Shamballa as Aikawa Shô’s artistic way of repudiating, apologising for, and in the best way he knows how redeeming himself for, his younger hateful flirtation with uyoku dantai politics and occult Nazism. And again: for what that’s worth, it’s admirable. It shows that Aikawa has unlearned the hate and resentment his nationalist elders taught him, matured both as a human being and as an artist, and begun to look at the world with clearer eyes. But the reason we still need to talk about Angel Cop is because Japanese political leadership and society as a whole hasn’t learned what Aikawa has. They still have the same idea that Japan is a special cosmic victim. They still have the same resentment-filled, revanchist and anti-human solutions to that victimhood.

So is Angel Cop serious political commentary? Well, yes and no. It’s not serious in the sense that if you put it to most people in Japan directly to endorse its political stances toward Jews or toward the world community, they simply wouldn’t. But it is serious in the sense that it serves as a reflection of certain élite attitudes. At the end of the day – apart from laughing at it – the other appropriate response to Angel Cop, and the only appropriate response to uyoku dantai politics generally, is Aramaki Shinji’s response in Metal Skin Panic MADOX-01: Flip it the bird, and attack it with a chainsaw. 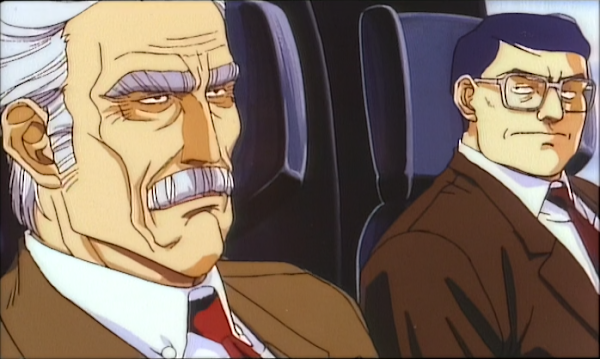