Starship, ride on with me: Lensman 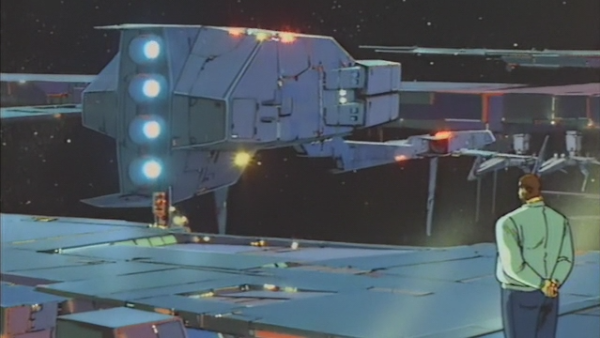 In keeping with my promise of watching more of Kawajiri Yoshiaki’s work, I went all the way back and took a glance at his debut 1984 animated film Lensman. Let’s put it this way: this isn’t Madhouse’s biggest hit ever. I guess it might be loosely based on EE Smith’s series of SFnal novels of the same name from the 1940s and 1950s, but there’s a much more immediate problem with it. Namely: it’s a gigantic freaking Star Wars ripoff. And not in a cool remix kind of way, like Cobra.

So, yeah, stop me if you’ve heard this one. An impulsive farm boy, Kimball Kinnison, who looks to do something more exciting in his life than just farm, receives top-secret plans that will help the Galactic Alliance to defeat an impossibly powerful galactic enemy, the Boskone. He is subsequently granted incredible powers and superhuman abilities in the form of the Lens. Assisted by a big strong hairy extraterrestrial named Van Buskirk, and a beautiful white-clad brunette named Clarissa ‘Criss’ with a ‘cinnamon bun’ hairdo on the right side of her head, the farm boy sets off on a quest to save the galaxy. A bunch of action sequences and chase scenes ensue, as well as shootouts in which none of the protagonists get hit (except when the hero shoots himself in the arm). The spaceborne enemy fortress explodes and everything ends happily, but the Big Bad survives and flies away into space, setting us up for an endless and increasingly-mindless churn of sequel movies, prequel movies and Disney spinoffs. 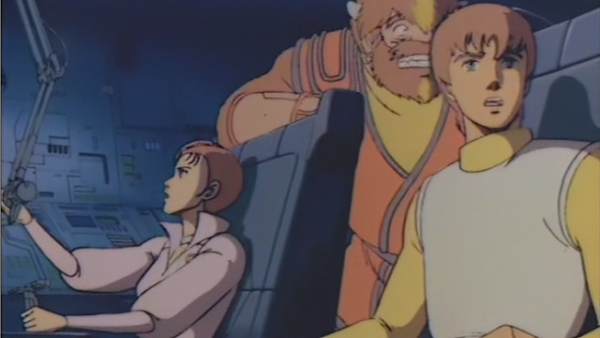 You know the plot; now let’s talk about the artwork. First of all: CGI animation from the 1980s does not age well. You can tell from the way that the editing team placed the CGI space-battle sequences at the beginning and toward the end of the film that these were supposed to be the ‘big wow’ moments, the ones which were supposed to awe the audience with their prowess. But nowadays – the CGI effects just look cheap. Like, Windows 3 screensaver level cheap. Basic polyhedral figures with practically no texturing flying flatly around the screen, they serve as an annoyance and a distraction more than anything else. That’s a shame, too, since the traditionally-animated art direction is actually pretty good and holds up well even today.

Although the main character designs are clearly imports of Luke Skywalker, Leia Organa and Chewbacca, they’re still all drawn quite well, and manage to be convincing and even funny in Buskirk’s case. Most of the characters are drawn in such a way that they are identifiably from an 80s anime: clean lines, slightly more realistic eyes in proportion. In addition, one of the secondary characters – DJ Bill, a mischievous, Engrish-spewing diminutive elderly man rocking a white mohawk, big hoop earrings and a torn red tunic – is probably himself worth the price of admission to the whole movie. The set pieces are also really well-drawn as well, featuring planets made up of massive sprawling mines and factories, with vast deserts, rocky moonscapes and oceans contrasting with dense urban decay. 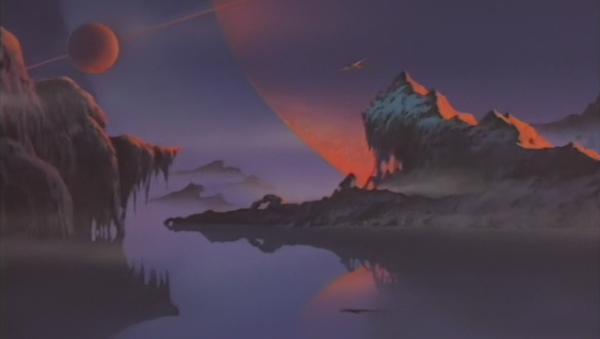 You also have the neon-drenched alien-packed nightclub scene which seems to be something approaching standard-issue in Japanese sci-fi anime from this era. The music consists mostly of cheesy pop-rock numbers with Engrish lyrics. The main theme song for Kim, ‘Starship hikaru o motomete’, pops in every so often. And unfortunately, the downright silly rock anthem that plays at the nightclub is a bit distracting. John Williams, this ain’t, but there is a semi-catchy bass-driven funk number that comes on during the fight scenes.

The aforementioned action sequences – despite the viewers sometimes being slightly unclear about what is going on and why – are incredibly well-structured, brilliantly-animated and expertly-paced: from the pitched space battles between enemy fleets to the chase scenes through the prisons of Delgon and the thionite mines of Radelix. We also get to see the beginnings of how Kawajiri plays with high-contrast palettes and flashy lighting effects in his animation here, as he plonks Kim down in all manner of otherworldly environments and makes him struggle to survive against all manner of weaponry, traps and alien physiology. (Usually he fails at this, and has to get his butt rescued by a senior Lensman named Worzel.) 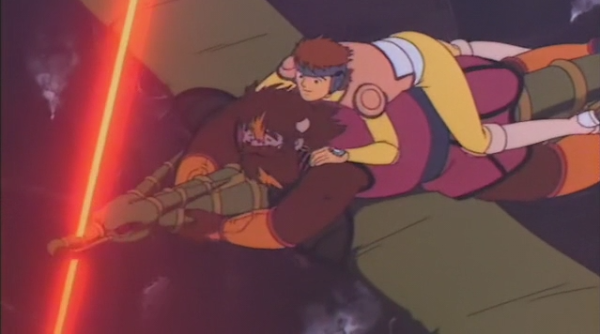 Speaking of alien physiology – it’s kind of disturbing what got done with Clarissa. She started off being a fairly cool, competent Galactic Patrolwoman, but she gets progressively more helpless as the film goes on, sad to say – from crashing the Britannia on Delgon to being repeatedly bound, rendered prone and helpless by tentacles, tentacles and more tentacles (and, to be fair, some adhesive strands of saliva to mix things up a bit). This isn’t Wicked City just yet, though. Criss’s fully clothed each time, and there’s nothing any more than mildly sexually-suggestive to any of the situations. Even so, the fact that she’s basically reduced to a passive object to be rescued by Kim each time is more than a bit disappointing. And the tentacle thing got a bit wearing starting around the fourth time it happened.

In sum: Lensman features blockbuster visual efforts combined with a B-movie knockoff script, which is a little disconcerting. There is an overall enjoyment factor to Lensman, though, if you happen to like adventure movies and space operas that aren’t too intellectually straining and don’t pretend to be. The retro chic factor (and the constant reminders that, yes, this is a movie from the early 80s and very proudly so) also figures in. And yeah, even if it’s early it’s still directed by Kawajiri Yoshiaki, so you know that at least the traditional animation pieces will be pretty. 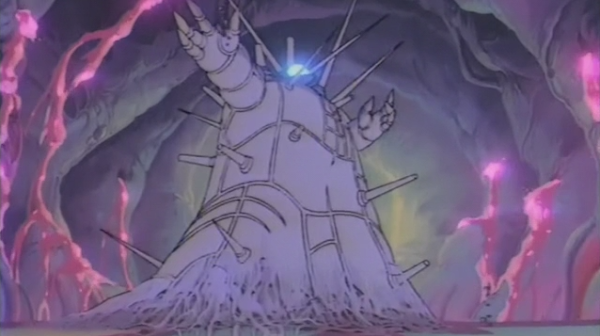