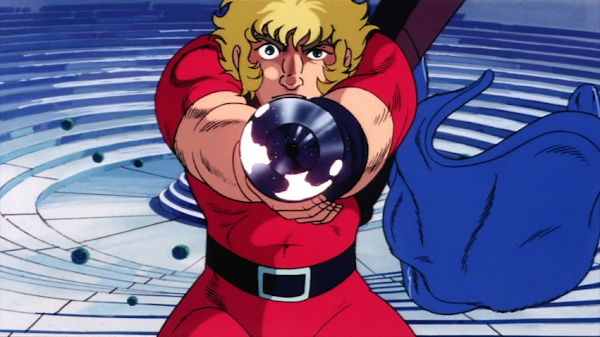 Talk about your misleading first impressions. My introduction to the work of Terasawa Buichi was the visually-appealing but otherwise underwhelming Kawajiri Yoshiaki-directed Midnight Eye Gokû, which I summed up as: ‘the cyberpunk remix of Journey to the West that no one wanted or asked for’. But the other animated franchise that Terasawa is known for is the Space Cobra franchise, of which I have just recently watched the 1982 film. Judging just from these animations – I haven’t read the manga for either Gokû or Cobra – I certainly have a preference here.

Terasawa Buichi’s work is apparently pretty influential. Luc Besson was honoured to talk with Terasawa when he was doing promotional work for The Fifth Element in Japan, and that is apparently because Cobra has such a high popularity in France. It’s easy to see why this is. Cobra kicks it old-school: the story of a smooth-operating rogue space pirate with a ‘psycho-gun’ mounted in his left wrist and a seven-million-credit bounty on his head, simply oozes style. And that style is raygun Gothic, drawing heavily from the trappings and settings of the American Golden Age of Comic Books and the explosion of pulp mags which preceded and shaped it. 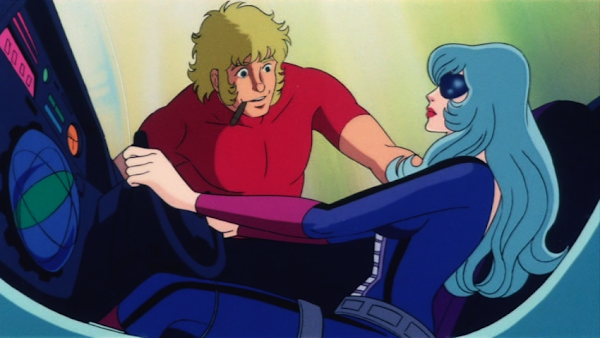 The adventure of Cobra begins when he meets the bounty hunter Jane Flower, who has just taken the head of the Missionary Dakoba for which she intends to claim a bounty. Cobra spots Jane in a bar, and follows her out to strike up a conversation. When he reveals who he is, she initially doesn’t believe him, because Cobra looked very different and was supposed to have died two years ago. However, when she sees his ‘psycho-gun’ in action, she learns that Cobra is who he says he is, and also falls in love with him. It turns out that Jane is being pursued, however, by a Pirate Guild led by a seemingly-invulnerable villain Crystal Boy, who harbours ambitions of taking over the entire universe. Upon learning this, Cobra is drawn into an epic succession struggle between three sisters – Jane, Dominique and Catherine – over the Star-Planet of Miros. The successor-Queen of Miros alone has the power to determine the Star-Planet’s fate, and the life or destruction of an entire galaxy is at stake.

Yes, it’s pulpy. Yes, it’s cheesy. But there’s a heart there as well. The epic, bittersweet sweep of the storyline builds gradually from what appears to be just a random chance meeting between two strangers. In terms of tone, in fact, the closest parallel I can think of is the similarly colourful and exuberant short ‘Deprive’ by Ômori Hidetoshi… but Cobra is not content with such narrow confines. Though Cobra starts off in a space tavern crowded elbow-to-elbow with all sorts of alien intelligence, and takes us to a disco dance party at a resort on the other end of the galaxy, the film also bears us across these fantastic panoramic planetscapes in which the power of stone and water is pervasive and paramount; into ice caverns and across sweeping frozen plains lit only by the protagonists’ rockets (which sometimes take dives through arches and canyons similar to the Falcon in The Empire Strikes Back). As the stakes take on a galactic scope, Terasawa doesn’t let us forget that what decides the fate of the entire seventh galaxy is the power of love – the love between Cobra and Jane (and later Dominique), which transcends time and space and even death. 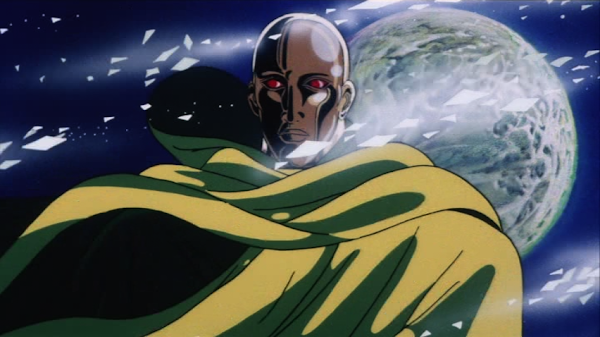 Space Adventure Cobra combines the space-operatic æsthetics of Star Wars, Flash Gordon and the more futuristic Frank Frazetta artwork on one hand, with a clever, dryly-humorous, playboyish masculine ideal that rides the line somewhere between James Bond and Lupin III. In fact, now that I’ve seen Cobra, despite his decidedly un-Japanese characteristics and design, it’s difficult to imagine a whole swathe of other anime heroes being possible without the precedent of the cigar-chomping, wine-sipping Cobra with his crooked nonchalant grin and death-defying wit. Vash the Stampede, for example, has a nearly-identical backstory (including the massive bounty on his head) and personal weaknesses… just swap the damn cigars for doughnuts, and there you go. Other swashbuckling space-opera hero-antiheroes like Gene Starwind, Caine Blueriver, Justy Tylor, even Spike Spiegel – all seem to stand at least partially in the shadow of Cobra and his psycho-gun.

As can probably be taken from the above, a great deal of work went into the character designs. Obviously the wavy-haired roguish blond muscular manliness of Cobra takes pride of place here, but even his archenemy Crystal Boy manages to impress. Crystal Boy’s entire body is made out of a translucent liquid ceramic that is completely invulnerable to laser fire and easily absorbs conventional bullets without ill effect. And Crystal Boy even uses his own ribs as double-bladed weapons against Cobra and those who assist him. A significant amount of effort went into portraying the wavy blue- (or green-)haired, hourglass-figured, pneumatically-built identical Flower triplets as well. True to Terasawa’s pulp-art preferences, each of them spends significant amounts of screen-time in the nude, much to the delight of young male viewers I’m sure. 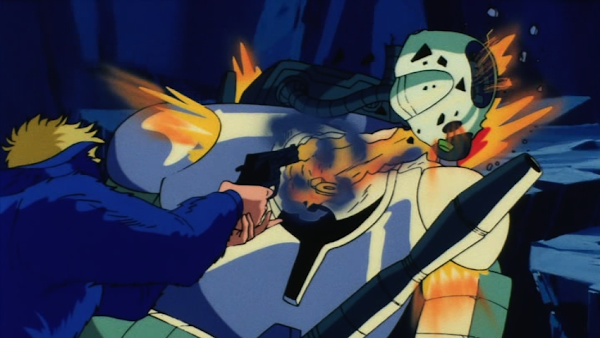 The lush intricacy of the artwork and the carefully-articulated animation of the fight and chase scenes especially is matched by the use of the soundtrack. It’s not just the cheesy dance numbers in the disco, after all. There was clearly some more Star Wars influence at work here, because the sound design makes use of a full-orchestral John Williams-soundalike score to emphasise the dramatic moments. And then of course you’ve got the cheesy 80s J-pop vocal theme performances by Matsuzaki Shigeru and EVE to round it all out. Nice.

Cobra is indeed an impressive and enjoyable watch, with its high production values, high concept and undeniable importance to anime and to Japanese science-fiction more generally. (Heck, look who one of the key animators was!) But I find I couldn’t quite enjoy it as much as, say, Royal Space Force. The similar questions about the power of love posed by the latter movie, placed on a more believable scale with a more relatable pair of protagonists, might come across more muted at least on an initial viewing than Cobra does, but the emotional impressions left by Royal Space Force are more profound. 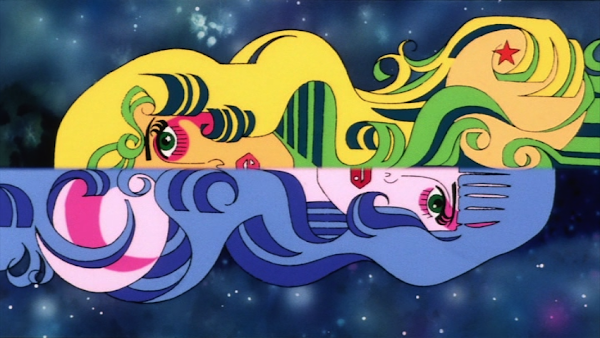