Is ‘at rait? Burn-Up OVA 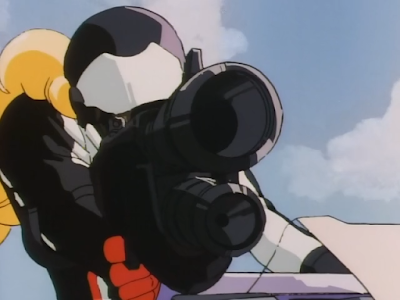 Time to take a look at yet another cyberpunk-adjacent action-comedy B-list buddy-cop OVA, 1991’s Burn-Up. This OVA is notable for a couple of reasons. First, it was apparently one of the more influential ‘girls with guns’ franchises influenced by Dirty Pair and Bubblegum Crisis. Second, it went to spawn a whole bunch of spinoffs and reboots, which seem to have focussed more on the comedic and fanservice elements than on the action. And third, it shows a bit what the AIC studio was up to before Artmic went belly-up and AIC somehow got all of Artmic’s intellectual property. AIC was putting out the Burn-Up OVA the same year that Artmic was churning out the Bubblegum Crash! OVAs, a comparison which kind of goes to show you how bizarre the early 90s were for Japanese animation.

Ahem. So Burn-Up is the story of three young, pretty policewomen in future-version-of-Tôkyô who normally do traffic duty, who get pulled into an investigation of a human trafficking kingpin named Samuel McCoy. The three cops are the hot-tempered loose-cannon blonde biker Maki; the normally calm and reasonable tech whiz Reimi; and the young, pink-haired and naïve Yuka. (Yes, this is very much a ‘wunza’ flick, and the characterisation doesn’t really go much deeper than that.) The police chief badly wants to bust McCoy, but the clientele for McCoy’s ‘product’ – think Jeffrey Epstein here – are all political and business elites, so nothing the police can get on him will ‘stick to his Teflon ass’. Our intrepid traffic trio decide, with the help of Maki and Reimi’s respective love interests Kenji and Bamba, to case one of McCoy’s ‘fronts’ for his human trafficking business – an entertainment-district mall named Satellite 7 (or, in the Engrish of the OVA, ‘Satrait-7’). Yuka promptly gets kidnapped for immoral purposes by McCoy’s people, and Maki nearly gets herself killed by McCoy’s top assassin Gannack trying to rescue her. Obviously, Yuka’s partners aren’t going to take this lying down, and they stage an assault on McCoy’s compound in an armoured truck with all the guns, ammo and grenades they can carry. 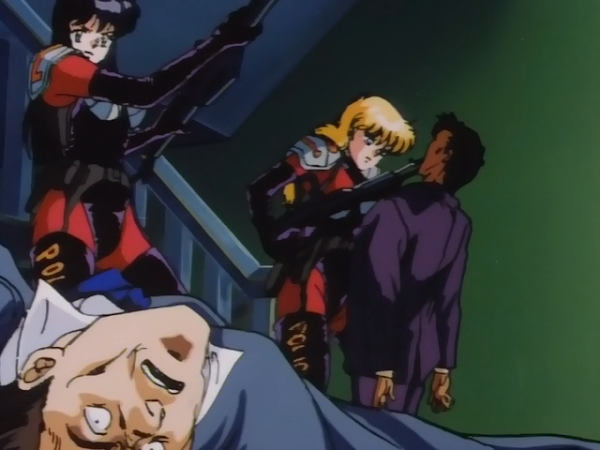 The director of Burn-Up is Ide Yasunori, who would also go on to do Onegai Teacher and Onegai Twins, as well as one of the Silent Möbius movies. This was one of Ide’s first rodeos, and it does show. There’s an earnest lack of polish to it that reminds one slightly of Metal Skin Panic MADOX-01. But as first rodeos go, it isn’t bad. Burn-Up sports a pretty basic, straightforward, unpretentious plot, which is a good thing for a 45-minute runtime. Don’t go into this expecting a profound philosophical meditation on the meaning of life. The police chief even does a straight-up title drop in his dialogue, which ought to tell you something about how seriously you’re supposed to take it. (I’ll say it’s pretty refreshing when a one-shot OVA like this doesn’t pretend to be more than it actually is.) The policewomen are gutsy and sympathetic, and the bad guys are straight-up douchebags, so it’s satisfying when they get what’s coming to them. For popcorn action, it’s pretty well-done.

The soundtrack is mostly the pump-you-up 80s hair rock and glam metal that you’d expect for this kind of anime, with some suitably-annoying techno and dance numbers playing in the Satrait-7 nightclubs. The sound effects – including the computer noises, phones, gunshots and sirens – sound a little bit like they were designed for a PC game from the early 90s. The art style is very much so more industry-standard 90s than industry-standard 80s, which is one reason why the comparison with Crash! is interesting. It represents an entirely different visual style. The policewomen’s eyes – and those of all the women characters in this – are enormous, so much so that it’s off-putting. When it comes to the human character designs I much prefer the late-80s art style that Crash! was still using in 1991. However, the fact that Burn-Up was still entirely hand-drawn and that the action scenes were all beautifully scripted, drawn and animated is definitely a plus as far as I’m concerned. The technical design and animation for the vehicles (particularly the motorbikes and the armoured truck), guns and computers in Burn-Up is flat-out impressive, and in an OVA one-shot that trades on its action sequences that’s definitely something that you want to see. 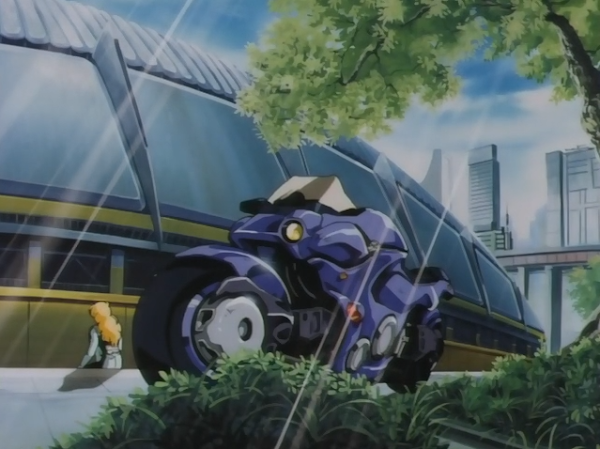 The nudity and violence levels in Burn-Up are… let’s say, inconsistent. There is some heavily-implied sexual violence. The good thing is that not as much skin was ultimately shown in the Burn-Up OVA as I was fearing, based on the sexploitation premise, on the sequels’ ecchi reputation and on an early shower scene with Maki. However, it’s kind of weird that when the girls get shot – multiple times – there’s no blood at all, whereas in one notable case when Reimi shoots somebody up there are geysers of gore and body parts go flying. Maybe Reimi got the Bloody Mess trait…? Maybe Maki and Reimi were using skin-tight bulletproof armour…? That’s never explicitly stated, though. Similar plot holes and inconsistencies like this crop up at several points in Burn-Up, but not enough so to really detract from the enjoyment factor.

Anyway, Burn-Up is entertaining enough: decent overall, and better than I was expecting. At a 45-minute runtime it’s certainly not that demanding a feature. It is somewhat confusing to me, though, why all throughout the late 90s and early 00s AIC thought it would be a good idea to reboot and make three sequels – one OVA and two full-length TV series – out of Burn-Up. This reads to me like the sort of anime that a studio can turn out and pull a quick buck off of, but it doesn’t seem like one where anyone would get heavily invested in the story or the characters. Burn-Up’s worth a look if you can find it on a streaming service, but I wouldn’t go out of my way to pay money for it. 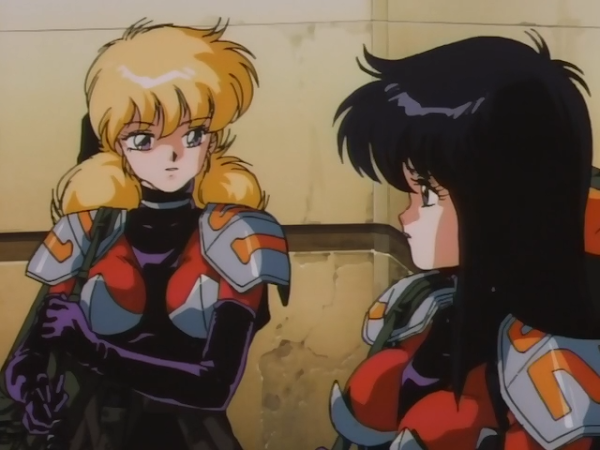