There is a reason this blog exists, and there is a reason that it’s separate from my other two projects. And that reason is to give me a space to discuss artworks like Едит и Ја, the 2009 cyberpunk-themed animated action film based on a graphic novel by Serbian artist Aleksa Gajić. Едит и Ја, released under the title Technotise: Edit & I in English, doesn’t break much new ground in terms of plot. Indeed, it riffs on a lot of the clichés of the genre pretty much straight, and it works best as an homage to Japanese cyberpunk works like Akira, Silent Möbius and the corpus of Shirow Masamune – all explicitly referenced and Easter-egged in the film. But the fact that both the graphic novel and the movie bring a particularly Serbian flavour to the cyberpunk genre in popular culture is itself worth remarking on. Indeed, one of the rationales behind Paneurasianist Weeb is an attempt to connect the metapolitical critique implicit in cyberpunk as a genre (particularly in anime but also in other filmic media, music, comics and so on) with the darkening megacorporate surveillance-state and therapy-state turn we’re seeing within the liberal ‘First World’, and with the subaltern revolt against which is present and active in places like Serbia (or China, Russia, South America, Africa and the Middle East).

A psychology student, Edit M Stefanović, finds herself struggling to pass an exam administered by her jaded and unethical professor. Stressed out at her family and struggling with her friends and with her sort-of boyfriend Bojan, Edit takes matters into her own hands and decides to get a chip implanted in her arm which will improve her memory so that she can pass. However, this chip ends up making her feel ill, giving her nightmares, and altering her diet to eat more and more iron, up to and including iron supplements and pieces of scrap metal. We soon learn that she’s the accidental subject of a government experiment through her care for an autistic math whiz – a professor who hypothesises that the future can be predicted by solving said math whiz’s fractal equation. Through her memory-enhancing chip, and through having seen part of this fractal equation at work, Edit becomes the living host for a truly self-aware computer that parasitically builds its own neural network on top of hers and ends up gradually taking over her body. In the meanwhile, the government wants its investment back from Edit, and will stop at nothing to get it back. 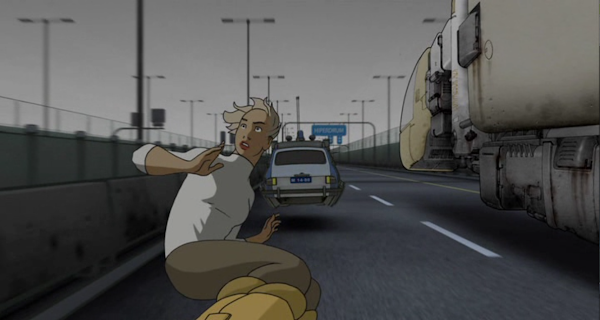 As I said: the plot and styling themselves riff on a lot of commonplace cyberpunk tropes from the eighties. We can see the blurring of the line between biological and mechanical, the blurring of the line between public good and for-profit, the ballooning of surveillance systems, alienated youths struggling against said multifarious corporate and governmental systems. You’ve got your high tech. You’ve got your low life. You’ve got your neon-drenched nightclub scene complete with sex and drugs, and your grungy underground labs. You’ve got your high-speed extreme sports on futuristic vehicles, your chase scenes through high-rise construction projects and superhighways your martial arts chopsockery against heavily-armed security types, and of course your navel-gazing existential introspection. Local-flavour references to Slobodan Milošević (and tentacle monsters), the anæsthetic properties of plum rakija, the moustached man in a fez and jacket being tossed out of a cafe by robot guards, the club bouncer who fancies himself a street poet and so on notwithstanding… so far, so Sprawl.

But what can be said about Едит и Ја is that what it lacks in originality, it more than makes up in conviction and execution – and it does so in a self-aware fashion that pays proper tribute to its predecessors. The sleek, modular, arthropodous ‘carapace’-looking architecture is a nice wink-nod to Appleseed and Dominion Tank Police, for example. And it’s not just the background art that’s done with a loving eye for detail. The fine everyday details of life in 2074 Belgrade are immersively crafted: the glitch-voiced robotic stuffed animals who go do odd jobs for Edit, the frameless single-pane glasses, the psychedelic ‘liquid sound’ bar, the single-sheet e-newspaper or the hovering pram. The characters are visually designed with clear flourish – Edit herself, of whom we see quite a bit, is quite easy on the eyes. The voice talent is excellently-cast with a fine ear for both humour and pathos. The humour in the film – and there’s quite a bit of it here – comes from a fair bit of off-colour banter, and the characters riffing on each other’s immature or bad decisions. And the animation is a quirky and eclectic blend of traditional (with both European and Japanese influences), cel-shaded, Flash and 3D modelling. 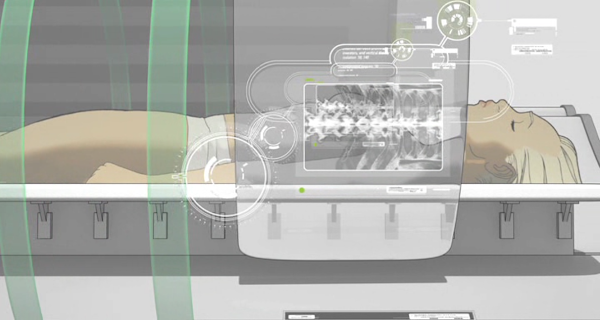 The main characters all start off feeling a bit vapid and self-absorbed, but that quickly changes once we see them in action. It’s something of a peculiarly-Serbian mark on the film that even though the six protagonists are all mired in the usual high-tech alienation, they really do seem to have each other’s backs and put their necks on the line for each other when they’re in danger. There’s some good old-fashioned inat in the characters’ attitudes to various authority figures in the film as well. Politically as well as thematically, the film plays the anti-totalitarian and anti-corporate riffs in the genre mostly straight. The omnipresence of the surveillance- and therapy-state is a theme here as well: Edit is only eligible for treatment at a clinic with the ID chip she removes to keep from being tailed. There’s a note of optimism, though. The future government in Belgrade, though, isn’t necessarily evil or devoted to a transhumanist ‘project’: it’s corrupt in most of the ordinary ways, and there are flawed and short-sighted people in it with their own agendas, which don’t necessarily overlap with those of Edit and her friends.

Likewise, the ethos of the story is more one of good-intentions-gone-wrong than anything else. Edit’s predicament with the AI growing in her is not the result of a nefarious plot but instead of various pieces of a cybernetics experiment ‘gone horribly right’ falling into place. The love-hate relationship between Edit and her deadpanning cybernetic ride-along (whom she names Edi) is the real emotional core of the film, though. Through that relationship we get to see Edit struggle with her emotions, with her own embodied nature and mortality, and grow as a character. We come to care about what happens to her at the end. As Edi grows, Edit begins to die, and the fact that the viewer can understand and sympathise with both ‘sides’ is a tribute to the quality – and, again, the conviction – of the writing. There’s a great deal to love about Едит и Ја: its unique blend of Eastern European and Japanese artistic influences, its character designs, its background artwork, its fast-paced deadpan and off-colour humour. The story might well be something you’ve seen before, but the execution makes it a fresh, vivid and enjoyable watch. 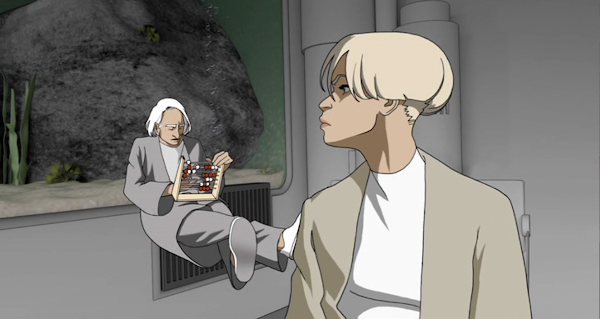