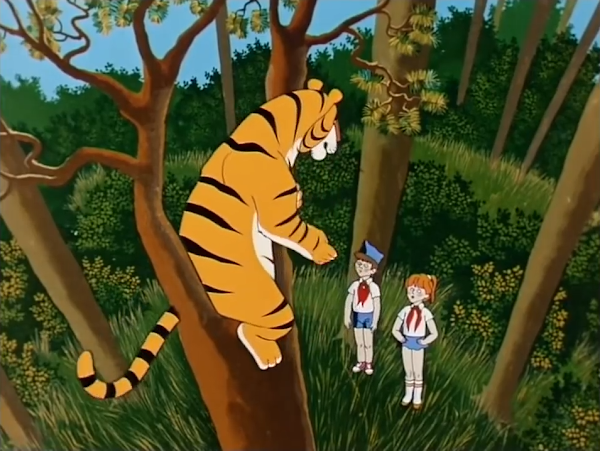 Roman Kachanov and Kir Bulychev, the writer-director team which created Mystery of the Third Planet, reprised their work in 1985 with another cute, sweet, innocent, short, SFnal-themed Soyuzmul’tfil’m production for children, Two Tickets to India (Два билета в Индию). If you took my advice, watched Mystery of the Third Planet, and enjoyed it – well, please do check out this one, too.

Due to a ‘malfunction’ on a ship from the planet Gedda caused by a fly on the viewscreen, two aliens crash-land on Earth. One of them, Professor Trankverri, takes the shape of a tiger – as he had planned on landing in India to attend a ‘symposium on the protection of the animals of the galaxy’. Instead, he lands in Siberia and encounters two Young Pioneers, Yuliya and Dima, who were grounded at camp for getting into trouble with one of the camp’s cats. With the help of the two Young Pioneers along with Yuliya’s babushka, Trankverri manages to evade zookeepers, hitch-hike across Russia, join a travelling circus and ultimately find his way to India… albeit with a few hiccoughs along the way. 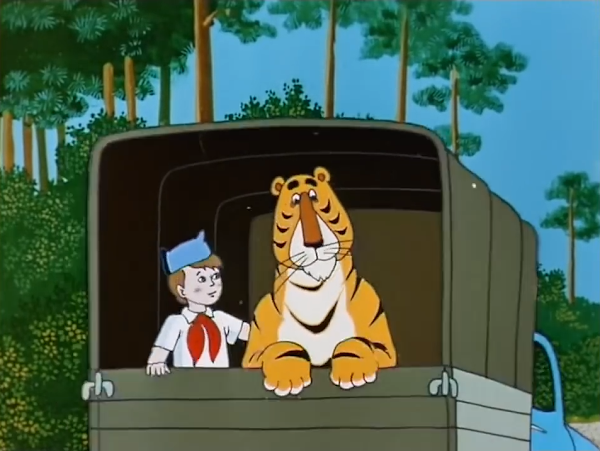 If this plotline sounds a bit like a mash-up of E.T. and Madagascar, you might be somewhat in the right ballpark. Certainly there is not the same scope or grandeur or psychedelic imaginary to this short that there was to Mystery of the Third Planet. But Russian humour from this era tends to be a lot gentler than that you would see in American films and TV and cartoons, relying a lot less on wisecracks and cruel witticisms than on situational humour and setups which rely on subversions of expectations. True, Dima does play several pranks on Yuliya (and on the camp cat) – but he also genuinely and chivalrously shows that he cares about her at several points… particularly at the end. The exchanges between Yuliya, the babushka and Trankverri when they first meet demonstrate precisely this gentle humour, which relies on the absurdity of the situation and the good will of all the folks – human and alien – involved.

The animation style reminds one somewhat of Mystery of the Third Planet, though the general quality is nowhere even close to as high. The backgrounds are not too detailed – indeed, they often look like they were construction-paper cutouts from an illustrated children’s book – but they are vivid and striking all the same. Yuliya and Dima both have the same round-featured faces and fluid movements that Alisa Selezneva had in that film… but for some reason they don’t seem to have the same vivacious spark. Some modern viewers might find this fluid articulation to be a bit heavily-stylised, exaggerated and ‘old-timey’, but honestly this adds to the charm. Intriguingly the tiger and the sasquatch character designs are both believable and sympathetic despite not being big-eyed and ‘cutesy’. There was some nice subversion of expectations later in the short: I was expecting the character of the circus master to be villainous based on his design; however, that turned out not to be the case. 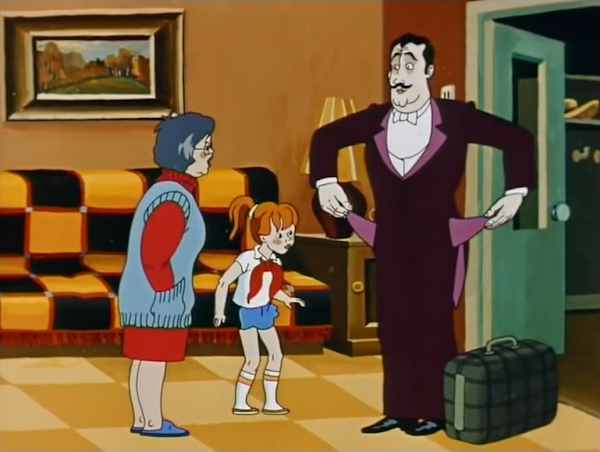 The soundtrack for Two Tickets is for the most part gentle and instrumental, and orchestral in setting – one can tell that right away from the opening theme. There is a bit of a folksy edge to it early on; and some Indian instrumentation (sitar, perhaps?) is used in the latter transition to that country. The truck-driver who picks up the hitch-hiking Yuliya (and Dima and Trankverri), sings a SFnal-themed children’s song in a typical Russian folk mode, about his truck and the winds in Siberia and flying rockets to other planets.

In short, it’s pretty much just what it looks like on its face: a cute, G-rated family adventure story with some light and gentle humour and some SFnal trappings. If there’s any message to it at all, it’s a light theme of environmental conservation and wildlife protection… but it’s fairly subtle, and not out-of-place considering the protagonists and their charge. Don’t go into it, obviously, expecting a trenchant or deep-cutting premise; it’s basically ‘we found an alien in the woods; let’s send him home safely’. Which is fine – there is certainly space enough and reason for animations like this. 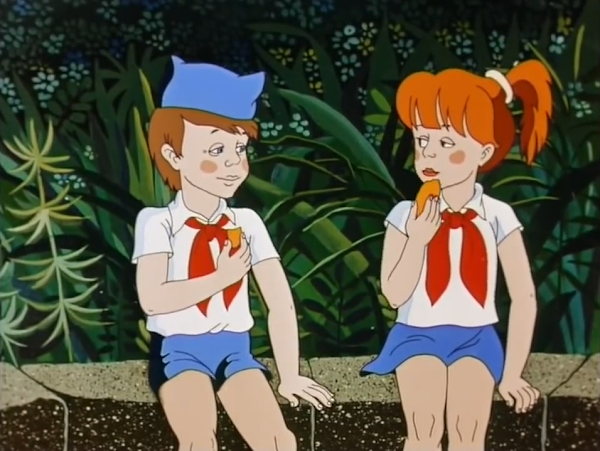