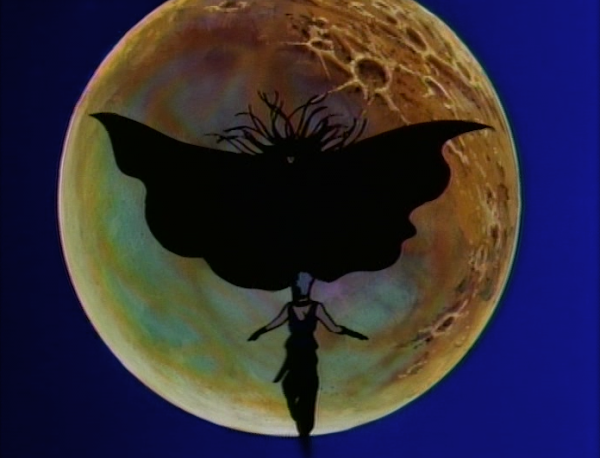 I remember watching the 1985 animated feature Vampire Hunter D when I was a sophomore, as part of the anime club at Kalamazoo College. Quite honestly, the impression it left on me was more one of images than one of story. So I went back and rewatched this old thing, and found that there was in fact a good reason for that. Nostalgia factors aside, Vampire Hunter D is kind of forgettable. But it’s got a few charming factors to it that are worth going into.

It’s 10,000 years into the future, and even though humankind has evidently progressed to using cybernetic and directed-energy technologies, most of them still live solitary, poor, nasty, brutish and short existences in villages dotting a post-apocalyptic countryside, as potential prey for the wandering spectres and monstrosities that have arisen. This was the fate of Doris Lang, the daughter of a dead hunter, and her brother Dan. The local ‘aristocrat’, Count Magnus Lee, takes an interest in Doris and claims her as a bride. Desperate, Doris herself finds a wandering hunter, who goes only by the name of D, and hires him to protect her from the Count, even going so far as to offer her body as payment. D agrees to the job, but consistently declines that part of the offer. In going up against Lee, however, Doris and Dan soon learn that D has several secrets that place him a cut above the average vampire hunter… 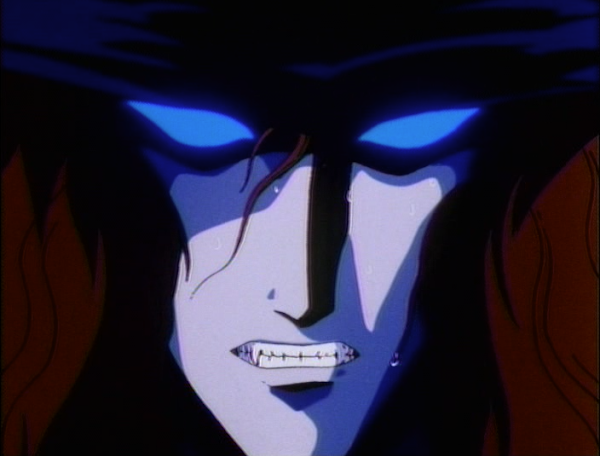 I already talked a bit about Wicked City before, and its influence on the early genre of urban fantasy; but in Vampire Hunter D we actually have an earlier animated adaptation of one of Kikuchi Hideyuki’s novels – although this one was directed by Fist of the North Star’s Ashida Toyô rather than Kawajiri Yoshiaki. Given how much of a fan I am of Kawajiri Yoshiaki’s work otherwise, chances are good that we’ll also be talking about some adaptations of Kikuchi’s other work as well on Paneurasianist Weeb… including, of course, Bloodlust.

At any rate, from an artistic standpoint there’s a lot going on in Vampire Hunter D that deserves comment. The concept and the artwork are top-rate. In the post-apocalyptic world of the future, even though humanity has advanced technology like cyborgs and plasma rifles, the monsters and perils created by nuclear disaster have created systems of dependence similar to feudalism. Vampires have formed a new ‘aristocracy’ which rules and ruthlessly exploits the human beings who live in villages… while hiring the monsters as their personal bodyguards and worshippers. Does it all make sense? … Nah, not really, no. But æsthetically, it actually works. 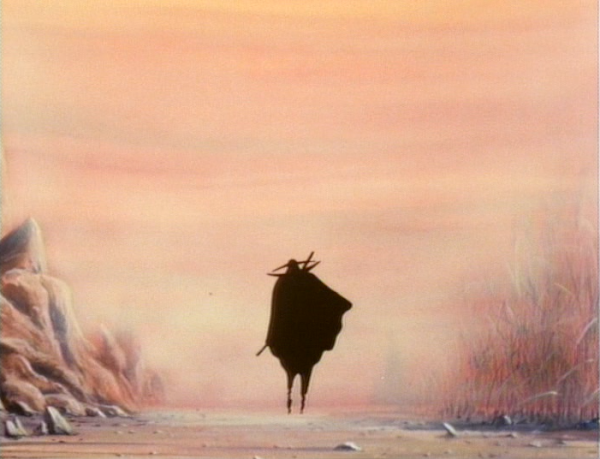 And on that score, Vampire Hunter D does tend to wear its influences on its long, frilly-cuffed sleeve. There’s a mix of literary High Gothicism with certain stylistic influences from American Western movies (Shane and The Magnificent Seven being key influences here) and the British Hammer horror films, with a bit of Mad Max thrown in for flavour. Even the name of the villain, Magnus Lee, is a hat-tip to Anne Rice’s The Vampire Chronicles and, of course, the career of the late lamented Christopher Lee.

In terms of the style of its visual art, D delivers superbly. The character designs of D, Magnus, L’armica, Ray and the various monstrous minions in the castle are all really well put-together; as are Doris and Dan and the cast of villagers around them. The castle itself is a kludge of Gothic dungeon and random industrial piping and sheet metal. The palette tends to be – and this does show its mid-80s grounding – high-contrast, with a lot of neon-bright primary colours offsetting the darkness of the deliberately-schlocky Gothic setting. But the action scenes are a bit rudimentary. True: vampires get impaled and dismembered and bleed profusely, monsters get sliced in half, one person’s head explodes graphically (this is, after all, Ashita Toyô we’re talking about), and one eye gets put out. But the fight sequences themselves in Vampire Hunter D were actually surprisingly wooden and seemingly technically-limited when compared with other productions of this time. Even the innuendos, on the whole, tend to be fairly low-key and implied rather than explicit, despite Doris propositioning D and showing off some skin a couple times. 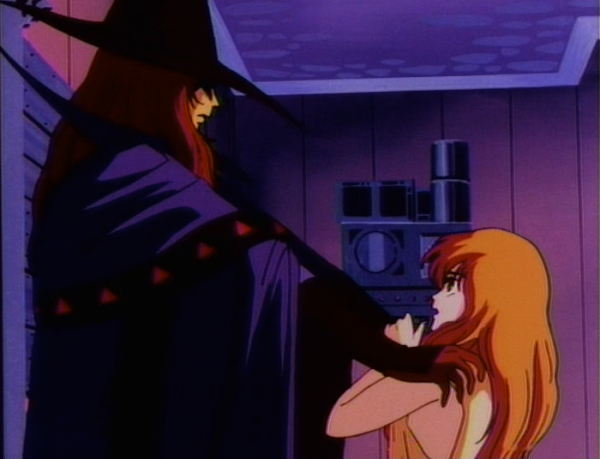 Thematically there are a couple of interesting things going on as well, though not much is actually done with them. L’armica and D tend to be interesting foils for each other, and also share some surprising similarities. Both of them are dhampirs (half-vampires), but L’armica goes to great lengths to deny her human heritage and D goes to equally great lengths to restrain his vampiric impulses to feed on blood… even when it is willingly offered to him. This contrast, which culminates in an intriguing commonality in willingness to self-sacrifice, is made explicit at the climax of the story, but one doesn’t really see either L’armica or D learn from the encounter. The critique of aristocratic will-to-power actually gets fairly explicit in a couple of places, particularly with Ray and Doris, but – again – it isn’t dwelt on at length.

Despite playing around in a fairly rich literary environment, with its quasi-Byronic lone-gunman-on-a-cyborg-horse protagonist, Vampire Hunter D doesn’t pretend to be deep. It’s not driving home any didactic point, and thankfully not assaulting us with any half-baked philosophy or quasi-religious hokum. This is one of its several (as one can see) saving graces. For the most part, it’s just there to entertain us with monsters, gore, schlock horror, and its techno-Gothic æsthetics. One can easily see why Kawajiri struck up a fast friendship with the original author of the series. 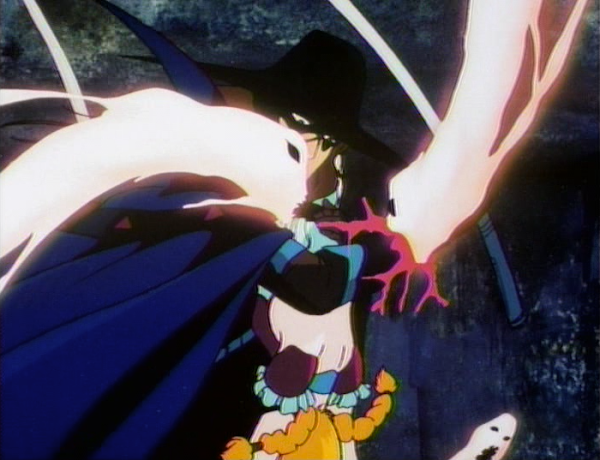 Where D tends to fall down a bit is on the story. The frequency with which the vampires kidnap and then lose their human prey either through intrigue, power struggles between themselves and general incompetence is an unintentional source of comedy, though it makes the story a bit repetitive in places. D’s fighting prowess is also at the point where he doesn’t really come up against major challenges to himself except from Ray… most of the dramatic tension comes from D fighting his own nature and bickering with his talking left hand. (Yes, D’s left hand is his own character, and he’s got quite a bit of dialogue.) Also, the music is kind of offputting with how out-of-date it is. The soundtrack tends to be pretty nondescript, a garden-variety synth-heavy 80s horror score.

So, like I said – the things I tended to remember from watching D 17 years ago were the images, the character designs, some of the stylistic flourishes. The story, the music, the action scenes: all these didn’t really leave an impression. Watching it again in 2021, it became fairly clear why this was the case. At the same time, it’s clear why this also became a cult classic among early aficionados of anime in the United States: there was a lot being done here in D that simply wasn’t done in this era of American cartooning. Ashita Toyô aimed squarely at a young adolescent male audience with D, and clearly resonated with that subset which came across it. 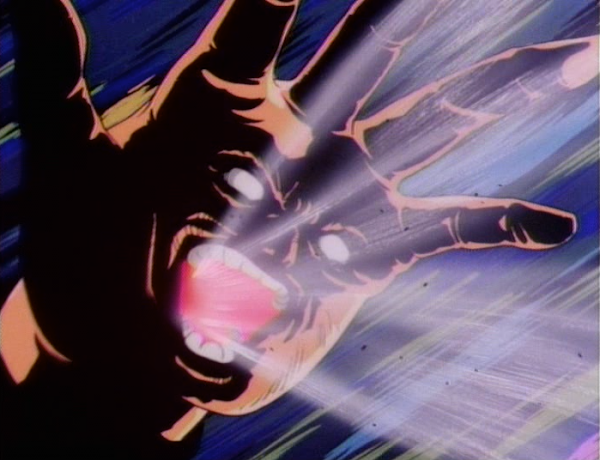