The talent on display in SFnal Soviet animation was, as we have seen, not only Russian. There Will Come Soft Rains, with its dark and foreboding brilliance, was the brainchild of an Uzbek director, Nazim Tulyahodzhaev. One thing I had not expected, but which does not surprise me, was that there was an Armenian director, Robert Arshavir Sahakyants, who was a prolific producer of animations in the 80s and early 90s. Several of them were aimed at children, but others are conspicuously adult-themed. A few of these ranged into SFnal themes: and the first one I watched was The Lesson (Урок in Russian; Դաս in Armenian).

The story follows a group of cosmonauts as they land on a beautiful, pristine and untouched planet to go hunting. However, Cosmonaut 5 quickly realises that something is amiss on this planet. Whenever one of the living things on this planet is killed, the genetic material it is made from transmits itself into its killer in the same way a parasite would into a host. As a result, the killer becomes the life-form it killed. She tries to stop her fellow cosmonauts from killing anything, but it is in vain – and soon all of the cosmonauts but her take on the forms of the exotic alien lifeforms they have killed. Eventually, Cosmonaut 5 manages to figure out how to change them back into human form again… but even that transformation comes at a certain high cost. 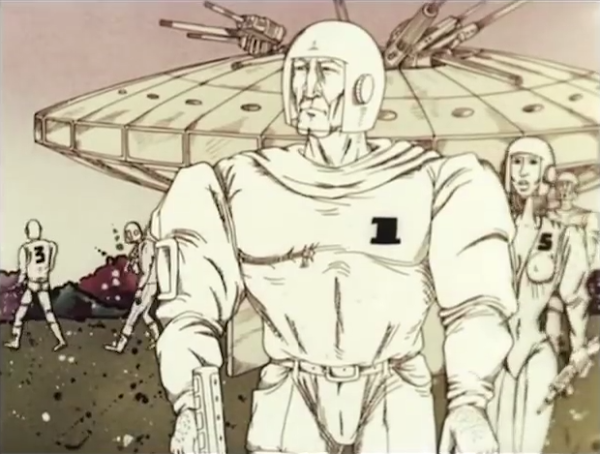 This animation is definitely not for kids. The nudity and the sexually-suggestive scenarios and humour on display in The Lesson – clearly only possible for production under Gorbachev’s glasnost’ policy – are practically in line with a Ralph Bakshi production. This adult-oriented humour is the vehicle for a particularly dim, misanthropic view of human nature. The cosmonauts on this hunting trip are shown with all of the petty short-sightedness and self-interestedness of their race, and a bleak enough view it is: they are all shown as violent, competitive, greedy, gluttonous, shallow, materialistic and sex-obsessed. As if to mock the æsthetic standards of Western consumerism, Cosmonaut 1 has (at first) a muscular body, a long patrician nose and a firm, square jaw; and Cosmonaut 5 has an exaggerated hourglass figure with prominent breasts and hips.

The artwork, though, is actually fairly interesting in its variety – though it is also hooked into Sahakyants’s didactic purposes. The cosmonauts – along with their ship, their weapons, their suits and their technological equipment – are all drawn in a sketchy, unfinished way, and they are deliberately left unshaded and uninked. This is in direct contrast to the environment that surrounds them, which is lushly rendered with watercolour tints and splotches of ink. This is a way of visually showing us that the human beings here are shallow and in some measure lifeless, whereas the creatures and plants of this planet are in some measure more real and more alive. 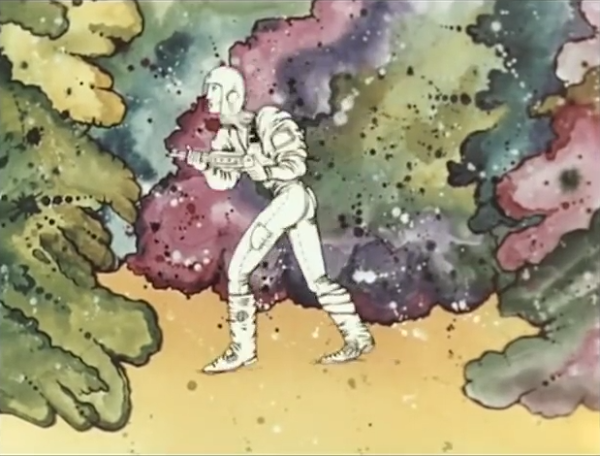 There is no dialogue to speak of in this short, apart from a few snippets in English and a couple other languages over the radio onboard the ship. The hip-hop beat and techno-heavy soundtrack is distinctly unlike any other I’ve heard in a Soviet production – again, as though Sahakyants is trying to emphasise what he considers to be the shallowest and most dissonant aspects of human culture that we would carry with us into space. There is one exception which comes at the end with the delivery of the titular ‘lesson’, and that is… ‘Imagine’. John Lennon’s ‘Imagine’. Good Lord. With all the lyrics plastered across the screen, in English AND in Armenian, as if nothing less ham-fisted and harping would possibly do.

And that’s precisely what made this short flop a bit at the end for me. I do give a lot of leeway to many of these old Soviet shorts, in all honesty, because there’s a certain charm in a nakedly-political cartoon that makes no bones about what the writer and director believe. I enjoyed Shooting Range and Contract, even though both of those shorts were in many ways overly didactic and preachy. Even The Lesson has some good points to make about environmental conservation and curbing human greed and lust. But this short just straight-up takes it too far and deep-ends into pretentious territory at the end. 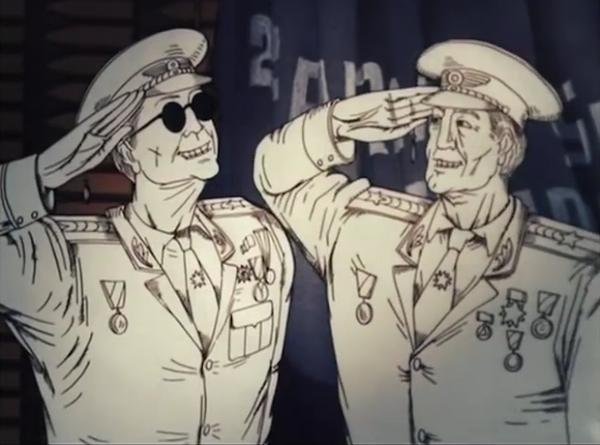 The pretentious turn at the end is really a shame, too, since The Lesson contains a lot of really solid artistry. There are flashes of brilliant inspiration and whimsy, like the opening sequence where a single sheet of paper is seen flying through space, folding itself into the paper airplane which becomes the cosmonauts’ spaceship. I can’t think of a better way to visually introduce the theme of human shallowness and two-dimensionality that Sahakyants wants to get across! And there are some really highbrow cultural allusions as well. One sequence is clearly meant to evoke, and parody, the ancient Greek myth of Leda and the Swan, for example.

Obviously any recommendation that I might make here would have to be tempered by considerations of audience and age. If you’re of more tender years or don’t like animated softcore, of course, stay away from this one. But even to the age-appropriate audiences I’d think twice before giving this one an unqualified thumbs-up. As I said, there are some really intriguing visual themes at work here, and in some ways it builds on and refines the caricatured collage effect of Tarasov’s earlier work. I really wanted to like The Lesson, which has so much going for it. Unfortunately it breaks down at the end under the self-important weight of its own message. 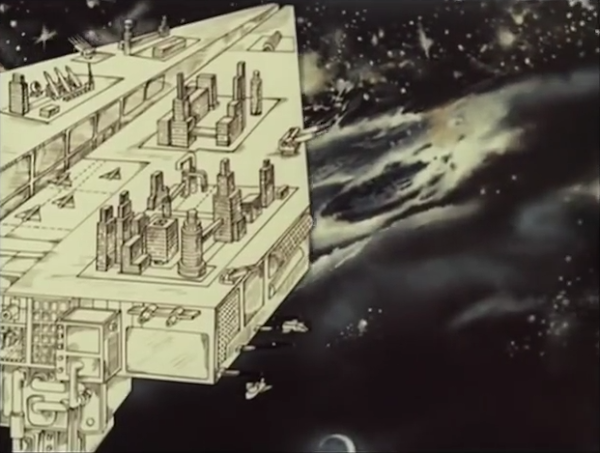