THAO Retrospective 6: From Up on Poppy Hill

This post was originally published to The Heavy Anglo Orthodox on 14 June 2017. 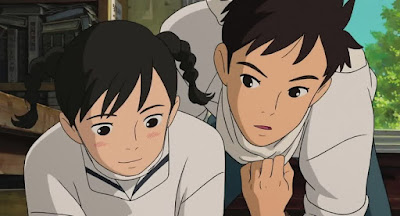 Miyazaki Gorô’s From Up on Poppy Hill is a fine piece of animated cinema. It is not usual Studio Ghibli fare, of course. The soundtrack alone, heavy on 1960’s kayôkyoku 歌謠曲 jazz-and-blues tunes, is already far removed from the epic, sweeping orchestral compositions of his father’s films, and sets the tone for a film which is much more subdued in tone and substance. But it certainly has Ghibli hallmarks (and those of Gorô’s father Miyazaki Hayao) stamped all over it. A sweet, innocent young romance; a spirited female lead with a strong sense of responsibility; the lack of a clear villain among the characters; the tragic interplay between old traditions and new technologies; a wistful love for the life-ways of an earlier age; the fascination with and enchantment of mundane details in a unique kind of magical realism. And also, very much like in his father’s work, there is a subtle-but-persistent left-wing critique of modern Japanese society which runs through the film, and a sensibility (albeit one refreshingly devoid of postmodern cynicism) regarding the deprivations associated with œconomic ‘development’ which calls somewhat to mind the filmography of Jia Zhangke.

The plot revolves around two interconnected themes: the fate of two children of war-ravaged naval families in the decades immediately following the Second World War and the Korean War, and the planned demolition and replacement of Konan Academy’s Quartier Latin clubhouse, an ancient, decrepit (but well-loved by its members) school building, to make way for new facilities in light of Tôkyô’s hosting of the Olympic Games. High school senior Kazama Shun publishes a poem about junior Matsuzaki Umi (called by her French cognate nickname ‘Mer’) in the school newspaper, about the signal flags she raises every morning in memory of her dead father, which he sees flying every day as he takes a harbour tug to school. Later the same day, Shun leaps off the clubhouse roof as a stunt designed to draw attention to the student-activist ‘cause’ of keeping the old clubhouse intact (something which fails to impress Umi). The two eventually bond and develop a romantic interest over their shared work in that ‘cause’; but their relationship becomes complicated by their war-torn family pasts.

Kazama Shun turns out to be a war orphan who was adopted by the local electrician in order to keep him from ‘falling between the cracks’. After hearing about how Umi’s own military father Sawamura was killed (by a mine off the coast of Korea during the war) and seeing an old picture of Sawamura with two of his shipmates, Shun begins to suspect that he and Umi are biological siblings. Shun tries to distance himself from Umi on discovering this, but their feelings for each other continue to grow. When the board of the school votes to tear down the clubhouse and they have to travel to Tôkyô together to argue to the school chairman for it to be kept, Umi confesses her love to him, not caring about the incestuous implications. And Shun reciprocates.

Shun’s story, though, gets ‘a little complicated’, as Umi’s mother Ryôko later reveals to her. Shun’s family was wiped out in the atomic blast that incinerated Nagasaki, his mother died in childbirth, and his father Tachibana, Sawamura’s shipmate, was killed in a similar accident several years before. In the MacArthur years, Shun had to be adopted ad hoc by the Matsuzaki family in order to avoid being sent to an orphanage, at which point he was given to the Kazama family (who had recently lost their own child). Umi is moved to tears at finding out Shun is not her biological brother, and Ryôko arranges for Shun to meet the third serviceman in the photograph. The Quartier Latin is saved from destruction by the chairman, who is impressed both by the students’ dedication to their old clubhouse and particularly by Umi’s manners. The final scene, where the last living friend of Umi and Shun’s respective fathers greets the two children as though ‘seeing [his] old friends again’, ends the film on a bittersweet-but-hopeful note.

Despite these complications, the sweet and natural relationship between Umi and Shun is never once presented in a prurient, fetishistic, exploitative or transgressive way. Instead, it may be best to see it as a remark on how traditional Confucian morals and right relationships – even those between friends and siblings – were literally blown apart by the wars and the social and cultural upheaval of its aftermath, with the pieces left to be retrieved as best the survivors could. Indeed, the anti-war themes and broader cultural commentary can be seen poking out in multiple places, some quite obvious.

There is a school debate scene early in the film in which Shun denounces the pro-demolition students as being ‘just like the old men who run this country’, and declaims that ‘there is no future for people who worship the future and forget the past’. For defending an old building on grounds of historical and cultural memory, Shun is branded an ‘anarchist’ and dragged down from the stage by the pro-demolition crowd. The debate devolves quickly into fisticuffs after that (stopped only by the school president in order to fool the teachers who come to investigate). But the scene illustrates very nicely how, in East Asia, particularly in Japan and particularly in the wake of the Meiji era, the concerns of the hard left and the concerns of the traditionalist right have gone merrily hand-in-hand against the presentist, liberal-‘conservative’ bureaucratic-corporate-military-political establishment. Miyazaki Hayao’s films also show the same kind of confluence of leftist anti-militarist and anti-capitalist concerns with perennial traditionalist ones, though seldom in such a forthright way as here.

The artistry of the film is, as to be expected from anything put out by Studio Ghibli, wonderfully intricate, lovingly crafted with great attention to the realistic small details, from the rusty old tugboat to the lush greenery of Coquelicot Manor’s backyard, from the rice fields and beaten-up old shops with their hand-painted placards standing alongside dirt roads to the newfangled neon-lighted neighbourhoods with new trolleys rolling through. They are presented side-by-side, without judgement and with equal care. But there is some true love, inspiration and Ghibli magic aplenty bestowed on the old Quartier Latin, a Victorian mansion with ornate wood panelling, stairways and railings, balconies and stained-glass windows, an old clock-tower with a kanji clock face, subdivided ramshackle, overrun with dust and cobwebs, overflowing bookshelves and lined with stacks of old newsprint, with bits and pieces of every high-school student boy’s hobby one can imagine. The clubhouse is practically a character in its own right, and one you come to care more and more about as the film goes on, and the main characters put more and more work into renovating it… and, of course, this intimate love for the old fits very well with the theme of the film.

From frame one, From Up on Poppy Hill is not your ‘typical’ Ghibli film. It was not received as enthusiastically by foreign audiences as Miyazaki Hayao’s other films. But it’s by no means to be considered a ‘lesser’ one for its lack of fantastic supernaturalism. Indeed, the domesticity and historical grounding of the story allow the film to delve deep, and ask questions as trenchant and meaningful as those Porco Rosso, Nausicaä and Mononoke-hime did.
Labels: 10s 60s anime feature films historical interest J-pop music political commentary