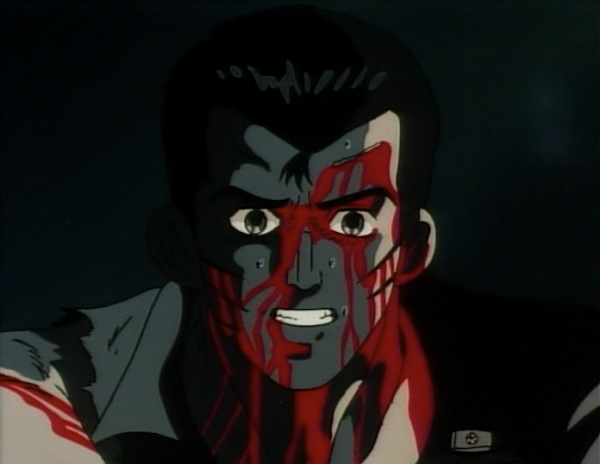 I have come here to chew bubblegum and kick ass… and I’m all out of bubblegum.

That’s right. Today I am reviewing the first of the post-Bubblegum Crisis spinoffs set in that universe, on the hard and unforgiving streets of Mega Tôkyô: the three-part 1990 OVA AD Police Files. A brainchild of BGC creator Suzuki Toshimitsu and Osaka native mangaka Tony Takezaki predating even 1991’s Bubblegum Crash, AD Police Files gives us a look at the days of Genom Corporation’s rise, when Boomer crime was still a new thing and when Leon McNichol wasn’t yet the tough, cocky, BFG-wielding Priss fanboy of BGC but still a callow, unexperienced rookie fresh out of the Normal Police. It tunes down the campy pop elements of BGC and cranks the neo-noir elements up to 11, including the femmes fatales and the tough-as-nails beat cops. And then for good measure it adds, in excess of anything resembling good taste, heaping portions of classic cyberpunk splatter, depravity, decay and crimes of passion. 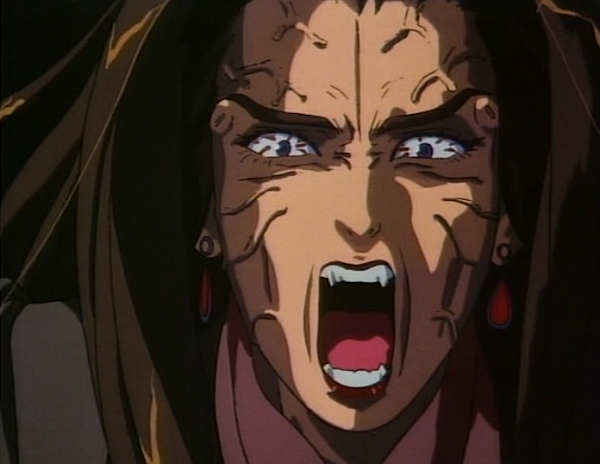 In my review of the Bubblegum Crisis OVA, I credited episode director Ôbari Masami for pushing the envelope and edging the series closer to explorations of the ‘blurred line’ between human and cyborg with his episodes exploring the relationships and psychologies of the very humanlike Boomers Sylvie and An-li. I still hold to this. I think Ôbari’s contributions to BGC, however cringey they might look to a viewer who doesn’t like his signature style and fanservice-heavy directorial choices, really did enrich the world and pushed the envelope of what the series creators were willing to try. But it’s clear that even before the project was conceived Suzuki Toshimitsu was looking to do darker, edgier explorations of how breakneck technological progress would break down social relationships.

Each of the episodes revolves around the younger Leon McNichol or his no-nonsense veteran partner Gina Malseau – or else, someone closely connected to them. Much like BGC itself, the sequence is episodic, with each episode being self-contained. They are all, however, thematically linked. All of them treat the disintegration of the person under the advances of technology – and in particular the abuse or misuse of cybernetic technology to replace or to fulfil sexual needs. 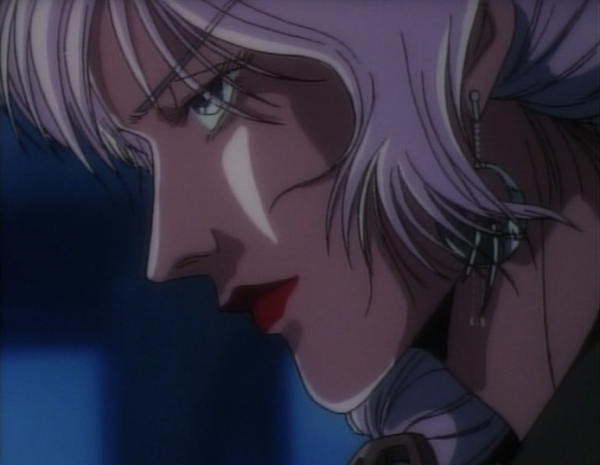 ‘The Phantom Woman’ begins with a flashback in which a bloodstained Leon McNichol has to use his gun to put down a female rogue Boomer who is trying to kill him. In the modern day, another female Boomer of an older type goes berserk at a Chinese restaurant and begins doing a number on the Normal Police. The AD Police are called in, and as they are trying to restrain the Boomer she steals a gun and shoots down AD cop Alus, who took out a significant life insurance policy beforehand. The insurance company claims that Alus – who frequented this Chinese restaurant – deliberately tampered with the Boomer and caused it to go berserk, then placed himself in harm’s way in order to commit suicide so his family could benefit from the insurance payout. Gina and Leon are given six hours to prove that Alus was on the level. Their exploration brings them up against the seedy underbelly of Mega Tôkyô’s aftermarket in used synthetic organs, and brings Leon face-to-face with a Boomer he thought he’d killed, who has a psychological fixation on him.

‘The Ripper’ begins with a string of gruesome murders and eviscerations of prostitutes on an old subway line, Paradise Loop. Both the Normal Police and the AD Police are brought in, as it’s currently a matter of debate whether the culprit is a Boomer or a human. Normal Police detective Iris, an old friend of Leon’s, is convinced from the pattern and distinct MO of the killings that the killer is a human woman driven by hatred. Iris is also, however, ‘in the market’ for a cybernetic eye, since her right eye is acting up. She’s encouraged to go to the organ bank by her coworkers, but Leon tries to stop her, saying she’d be trading away a piece of her humanity just so some rich bastard can use her organic eye as a replacement. The chase after the killer on Paradise Loop, however, blurs the legal line between cyborg and human as the details of a crime of passion begin to add up. 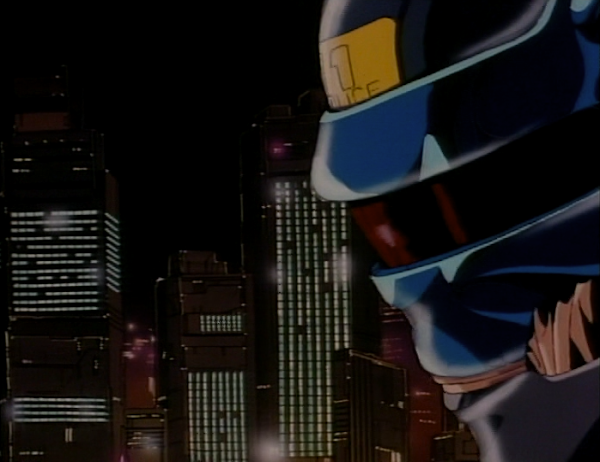 The final episode, ‘The Man Who Bites His Tongue’, focusses on an AD Policeman, Billy Fanword, who is killed in the line of duty and brought back to life as a heavily-armoured cyborg. (Stop me if you’ve heard this one before…) His only remaining original biological parts are his brain and his tongue, which he occasionally bites in order to remind himself that he’s still human. Gina is particularly worried about Billy – not only because he’s her ex and she’s increasingly worried about his increasingly erratic behaviour and excessive force, but also because, having replaced her arm with a cybernetic one, she fears she’s also losing her own humanity. It turns out that the doctor in charge of Billy’s rebuild is using him for her own ends, both sexual and professional, and she’s crossed one line too many in search of the perfect cyborg.

What is intriguing about this set of stories is that, despite their often graphic sexual content, the aim of all of them is not to titillate. Not one instance where T&A is shown is the object to excite the average viewer. Instead the aim is to get us to question the relationship between desire and function, and how both profit and aimless technological advance distort that relationship. As seems to be fairly typical of cyberpunk from this era, there is a strong criticism of the logic of capitalism in all three episodes – and not just with the idea of a rich people’s market in human organs that can be replaced with cheap cybernetic knockoffs. 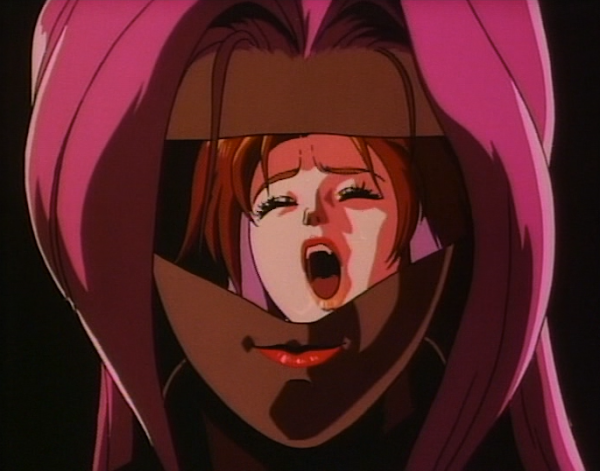 The second episode in particular shows how the mechanistic, productivity-oriented logic of the workplace is stacked against women with natural bodily functions (like menstruation and pregnancy)… but also how this logic is at odds with the very desires that capitalism produces and preys upon in men. Female bodies in particular are used as commodities to service both literal male libido and the libido dominandi. Corporate logic demands that women in the workplace ignore or put aside the demands of their physical bodies to serve the corporate bottom line. But consumerism outside the workplace represents and reproduces the imagery of the ‘natural’, organic female body as the grounds for male pleasure and fulfilment. This antinomy is what underlies ‘the ripper’ and her fanatical murderous hatred of the Paradise Loop prostitutes. The (as we see, sometimes underage) prostitutes of Paradise Loop are very clearly shown here as capitalism’s ‘safety valve’, both in terms of their ‘services’ for rich corporate clients and as an outlet and scapegoat for jealous rage.

In the third episode as well, there’s a close link shown between the female doctor’s abuse of Billy’s mechanical body for onanistic pleasure, and her ruthless drive to exploit him for professional advancement. At the same time, Billy is left emotionally stunted by his whole-body cybernetic replacement, and he becomes reliant – under the doctor’s manipulations – on a drug that stimulates his sole remaining human tissue, and allows him to experience emotion again. This drug abuse is what ultimately drives Billy over the edge and causes the machine to take over completely what’s left of his human brain. There is something of a critique here, too, about the contradictory demands on men under capitalism: that they be physically invulnerable, emotionally impassive and at the same time replaceable. Gina’s own ambiguous relationship to Billy (which sometimes comes off as self-centred as the doctor’s), and her epitaph for her former lover as a ‘two-time loser’, both underscore this ambiguity of men’s place in a violent social order which sees them as so many replaceable parts. There’s a lot of food for thought in AD Police Files; it’s unfortunate that it gets somewhat underappreciated in comparison with its parent series. 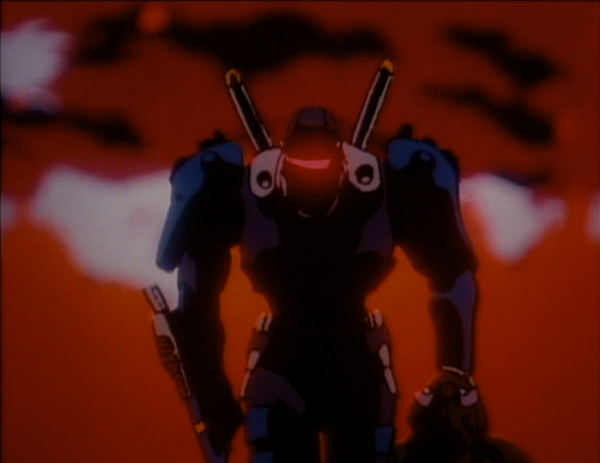 I do love the noir aspect to the artwork in AD Police Files: the subdued and washed-out palette, the emphasis on light and shadow, the use of still frames and slow pans to establish both mood and emotional distance. The animation is also above industry stanard considering its time. However, there are certain scenes – like the bar scene in the first episode with the insurance agent arguing with Gina and Leon – where the atmospherics get somewhat in the way of the storytelling, and the viewer is at a loss who stands where and what’s going on around them.

The music is the same kind of synth-pop and 80s AOR you got to hear in BGC. Here it’s less of a primary feature, however, and it often features as ‘background’ (i.e. on the car radio) rather than as out-and-out musical numbers the way the score did in BGC. This is already a significant departure in style, but an appropriate one for the setting and the focus on noir over pop. The English-language performances come via Filipina rock vocalist Lou Bonnevie, who has several AMVs (‘Heartbreaker’, ‘What a Fool I Am’, ‘Rockin’ the Beat’) as bonus features on the DVD release – made from animation from the original BGC rather than Files. Three other AMVs (‘Love Me Tonight’, ‘I Need Your Love’ and ‘I’m Every Girl’) use the animation from Files. The music and the animation are unfortunately a bit incongruous.

Again, the thematics of AD Police Files are much edgier and grittier than those you find elsewhere in (the works inspired by) Bubblegum Crisis. You see these thematics also in the brooding, melancholy Parasite Dolls, which was actually the first entry in the Bubblegum universe that I got to see. I will, however, get to that review at some later point. BGC did indeed lay the groundwork that got explored here, and many of the technical and philosophical preoccupations of AD Police Files have ample precedent within the universe they’re set inside, and personally I’m a fan of both of these entries in the canon, messed up though they are. 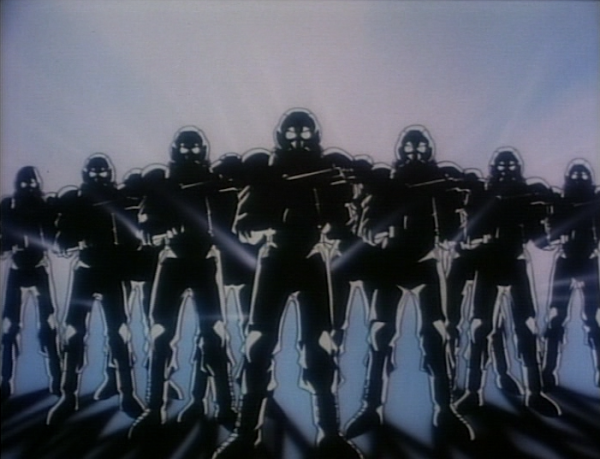