This post was originally published on The Heavy Anglo Orthodox on 8 August 2020. 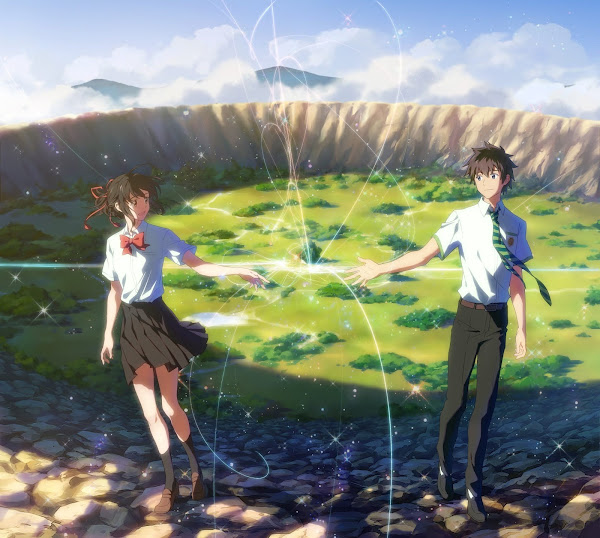 I want to help build landscapes that leave heart-warming memories… I didn’t even know anybody in that town. Why does the scenery of a town that no longer exists wring my heart so?


Back when I did my review of Flavours of Youth I promised I’d get around to seeing this film: Your Name, directed by Shinkai Makoto 新海诚. In short, I’m incredibly glad I did. This film is a masterpiece, one which well deserves its reputation as a classic of Japanese animation.

Your Name is best described as a fantasy/sci-fi romance, which speaks directly to a Japanese but also a more broadly East Asian experience of being disconnected in time, of the tensions and antinomies that arise from being part of a landscape where ageless antiquity and glittering hyper-modernity exist side-by-side. But the two main characters, despite their frequent and sometimes heartbreaking alienation which sometimes takes the form of literal jumps in time, still seek a genuine connexion with each other. And the heart of the film rests in how they mature and grow.

Your Name is a story that defies easy categorisation. It’s a story about a (literal) disaster, when a comet strikes a remote, traditional Japanese town. It’s also a bildungsroman and a breathtakingly bittersweet teen romance. It freely borrows from SFnal tropes about time-travel (including multiple timelines and alternate futures), as well as fantasy tropes about body-swapping (think the Warehouse 13 episode ‘Merge with Caution’). It is steeped in traditional Chinese lore, Daoism and Shintô religious rites, but it also has the feel of a young-adult fantasy book by TA Barron. It would be easy for any feature film, but particularly a Japanese animated one, with this many moving parts to feel overstuffed, overwrought and pretentious. But Your Name avoids this in part because of the tender vulnerability and humanity of the two protagonists.

Your Name uses a lot of traditional tropes from East Asian literature that might get lost on American audiences. The ‘red thread of fate’ is probably a familiar enough one, and it gets used liberally here between the two protagonists. The ‘butterfly dream’ of Zhuangzi is also alluded to. The tradition of fermenting rice wine with human saliva (kuchikamizake 口嚼酒) plays an important rôle in the story. And despite all the fractures and disconnects in time that occur between the two protagonists, there is a subtle but persistent theme of continuity, of history repeating itself, of déjà vu.

A comet, whose orbit comes within sight of Earth once every 1200 years, passes overhead. As it enters Earth’s gravity well, its nucleus fractures, producing a spectacular meteor shower. One of these fragments is large enough to fall on the village of Itomori. It destroys the town and kills 500 of its inhabitants. Two young teenagers look up at the night sky and watch the comet streak across. One of them, Tachibana Taki 立花泷 is a high-schooler and part-time waiter in a fancy restaurant in Shinjuku ward in Tôkyô. The other, Miyamizu Mitsuha 宫水三叶, is a high schooler in Itomori, and one of the two granddaughters of the keeper of the local Shintô shrine there.

Mitsuha is frustrated with her limited surroundings, being (embarrassingly) involved in the rites of the shrine, getting unwanted attention from being the village mayor’s daughter, and feeling like she’s trapped in a fishbowl. She screams from underneath the torii that she hates her life, she hates her town, and she wishes she could be reincarnated as a handsome boy in Tôkyô. Not long after this, Mitsuha and Taki begin to have strange dreams.

As though in answer to Mitsuha’s wish, Mitsuha and Taki begin swapping bodies, randomly, whenever they fall asleep. This part of the story might have been handled gratuitously or exploitatively, and sometimes it rides the line. (What’s the first thing Pete does when Robert Louis Stevenson’s bookends trap him in Myka’s body? Yup, Taki does the same thing. Typical teenage boy.) But Taki and Mitsuha are quickly intrigued by each other in deeper ways. Mitsuha finally gets to visit Tôkyô, go out to eat in stylish urban cafés, and hold down a job in a fancy restaurant. And Taki is enchanted by the charming architecture and wondrous vistas of Itomori – including the huge round lake which is very clearly and ominously a crater.

The two teenagers quickly begin setting ground rules for each other, what they are and aren’t allowed to do in each other’s bodies, leaving each other messages including by writing on each other’s hands and wrists with marker. Going through each other’s smartphones, they learn details about each other’s lives that they can appreciate. Taki begins asserting himself among Mitsuha’s classmates to get them to stop teasing her. And Mitsuha sets Taki up with an older girl at his workplace, Okudera, whom he has a crush on, and tells him in a message that he should be able to see the comet that night.

Taki’s date with Okudera goes poorly and no comet appears. He tries calling Mitsuha with the number she left him, and she doesn’t answer. The body-switching stops, but Taki can’t forget about the dreams he had from when he was Mitsuha. He then embarks, together with Okudera and his classmate Tsukasa, on a half-baked quest to find Mitsuha and her village. The only thing he has to go on, though, since he can’t remember her name or the name of the village, are the landscape drawings and sketches he did of the views from her house and the temple. An old man recognises his sketch as that of Itomori before the disaster, and Taki ultimately learns from him that Mitsuha was killed along with the rest of the village when the comet struck Itomori three years before.

Taki decides to leave Okudera and Tsukasa to try and find the holy place where Mitsuha’s grandmother took her to pay respects to the old Shintô god that had come 1200 years ago. It happens to be in the middle of a crater – and Mitsuha’s grandmother had told her that crossing over into the grounds of the shrine was like taking a step into the underworld. Taki finds the rice wine that Mitsuha made inside the shrine, and drinks it. This reconnects Mitsuha and Taki, and allows the two of them to rewrite the history of Itomori and save the townspeople from the impact of the comet fragment. But, as history changes, the dream ends, and the two of them lose each other again, even forgetting each other’s names…

I’m not going to spoil the ending here, but suffice it to say this: Shinkai Makoto has a brilliant and touching ‘ear’ for the voices of young adults. He makes real the connexion between these two people, so utterly different from one another and separated by time, space, class, sex, tradition and modernity. Although the director very cautiously refrains from overtly editorialising at any point in the film – with one partial exception – one gets the distinct impression that the same longing the characters feel for each other is connected intimately to a sense of loss of the traditions that Mitsuha embodies in her life even as she rebels against them.

One sees this same sort of traditionalism, actually, even in the gender-bending body-swap plot. Even though it’s a explicitly a comic point to see ‘Taki’ (inhabited by Mitsuha’s consciousness) act like a traditional-minded Japanese girl, and ‘Mitsuha’ (actually Taki) behave live a typical urban high-school boy – right down to their body language and pronouns (‘Taki’ almost gives the game away by calling himself by the feminine ‘watashi 私’ before landing on the more masculine ‘ore 俺’) – they each come to have a tender respect for each other’s physical embodiedness and an active interest in each other’s social lives. There is an almost Ruist sensibility here, in that Taki and Mitsuha come to understand and love each other by experiencing relationships with friends, family and surroundings through each other’s eyes.

The single most strained relationship in the film, actually, is that between Mitsuha and her father, who is a (presumably ruling-party) politician in the town, and who rather callously left his daughters behind with his shrine-keeping mother-in-law after their mother died. Throughout the film Mitsuha’s father refuses to listen to her or take her seriously. This is where I think the partial exception to Shinkai’s refusal to editorialise comes in. Mitsuha’s father represents a deliberate rupture with tradition even though he uses it to attain his personal goals.

As to be expected from a CoMix Wave production, the animation quality is amazing, even if – by Shinkai Makoto’s own admission – not quite reaching the Studio Ghibli gold standard. Both the urban and the rural backdrops are lovingly, painstakingly rendered – as though each frame is meant to be a landscape painting. The technical and stylistic use of proportion and perspective, also, enhance the thematic preoccupations with separation and reunion, rupture and continuity, alienation and connexion. I highly, highly recommend this film.
Labels: 10s anime feature films historical interest Japan philosophy science fiction time travel