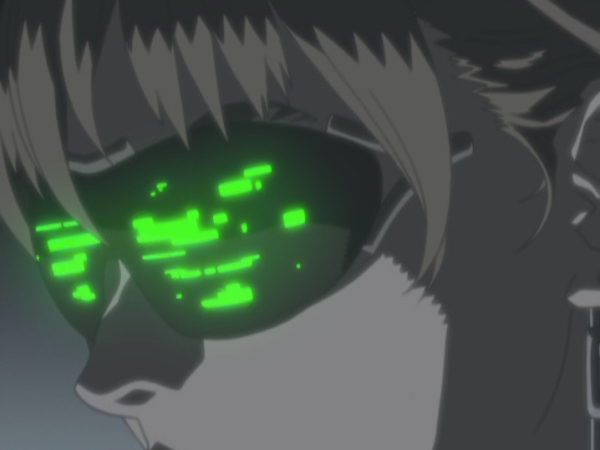 Finally got around to watching Armitage III Dual-Matrix over the weekend – the sequel to the Armitage III OVA and condensed Poly-Matrix movie. Although Dual-Matrix is competently directed and entertaining, and although it can’t be classified as ‘bad’ per se, it is certainly a bit frustrating at points when compared with the title that gave rise to it. It doesn’t really explore any new ground ethically or philosophically, and the SFnal world-building now appears decorative rather than integral to the plot. The problem is this: if it were a stand-alone movie I wouldn’t have any problem classing it as just sort of a standard, enjoyable popcorn action flick. But it’s not a stand-alone film, in that you can’t really understand what’s going on, particularly with Ross Sylibus, unless you watched the OVA or Poly-Matrix. All the emotional depth to the film is carried by the character development work that went into both Naomi and Ross in the OVA / Poly-Matrix – a context which someone starting with Dual-Matrix wouldn’t have.

Anyway, the story in Dual-Matrix starts off with Ross and Naomi living together in Saint Lowell under assumed identities. Ross is now Kevin Oldman, a security guard for a terraforming project that is attempting to create oceans on Mars. He and Naomi now have a family: Naomi gave birth to a button-adorable daughter named Yôko, who is celebrating her sixth birthday at the start of the film. Unfortunately, Naomi receives a message – a distress call – from a secret laboratory on Earth that has restarted the Thirds project using her clones. All of the people there – humans and Thirds – were massacred by a certain Colonel Strings. She drops everything and gets on a shuttle to Earth to investigate. In the meanwhile, “Kevin Oldman” stops a terrorist attack on the terraforming project and, during an outburst at a press conference, reveals a bit too much of what he’s actually come to think of robots. Because of this, he is sent back to Earth by the Martian governor Frederick O’Hara as one of the delegates to vote in favour of a controversial robotic rights bill. However, the bill has opponents such as the unscrupulous CEO Demetrio Maldini, who is willing to use any leverage he can to both sink the bill, and to figure out the secret to Armitage’s reproductive capabilities… 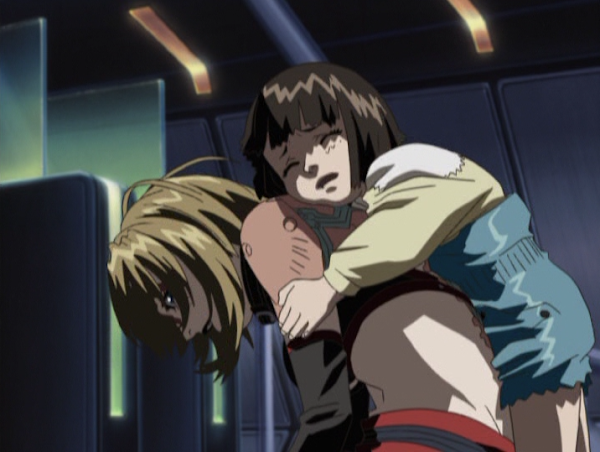 First, let’s start with the good points of the film. Yôko is probably the single most adorable little girl in any work of classic cyberpunk anime, ever. Looking convincingly like a much-younger Armitage with dark brown hair instead of blonde, Yôko’s cute factor is through the roof. Not to mention that she is remarkably sweet and loving to her parents for a six-year-old, helping out her dad around the house and giving presents to her mum. We come to care about what happens to her very early on, and empathise with Ross and Naomi as they work to rescue her back from her kidnappers. The reveal of Yôko’s eidetic memory is handled naturally and in a way that makes sense for the plot. Although a lot of it is done silently, without dialogue, we get to see Yôko process her conflicting feelings about her mother being a robot, and eventually we see her accept Naomi with a young child’s sweet, uncritical affirmation.

In general terms, the art direction is also leaps and bounds ahead of that in the OVA and Poly-Matrix. True, there aren’t as many atmospheric wide-angle shots of urban and rural Mars and high-concept SFnal setups like the double-skyscrapers of Saint Lowell as there were in the OVA. But the attention to detail, the bolder, heavier inkwork and the use of shading and lighting effects give the animation a great deal more weight here than the OVA had. The action sequences are also technically more impressive, and the articulation and limitations of Naomi’s body (as well as the android-clones she squares off against) in these sequences is much more convincing. The character designs as well, from the blind Colonel Strings to the amoral Demetrio Maldini to the creep-tastic cyber-harlequin Mouse and the killer skate-punk Armitage clones, are put together with a remarkable deal of thought and careful attention. The CGI chase sequences, including the Chicago bridge jump and the helicopter fight, although fluid and well-directed, are still Lost Universe-tier in terms of their blocky plastic quality, and date the film rather badly even for the early oughties. 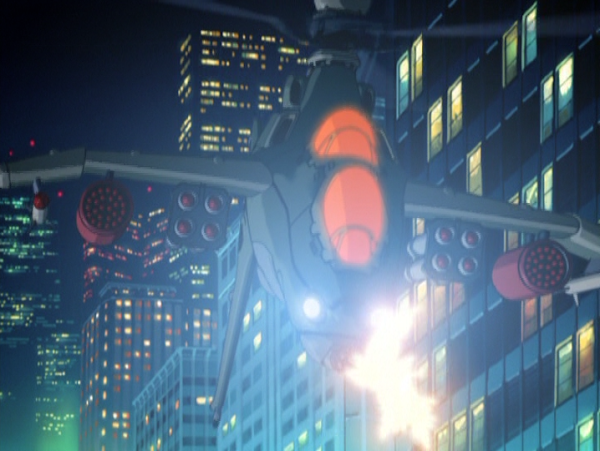 The musical choices here are not as catchy as in the OVA – unfortunately they’re rather forgettable. There are some subtle… and indeed not-so-subtle… shout-outs to Paul Verhoeven’s 80s blockbuster films: RoboCop in particular. (You’d think they’d go more for Total Recall given that the Armitage franchise is set on Mars, but no.) The enforcer robot for Maldini looks and acts very much ED-209, and they even give the ‘please put down your weapon, you have 20 seconds to comply’ line to the security robots in the building where Maldini is keeping Yôko. For some reason they decided to drop in a bunch of on-the-nose textual The Wizard of Oz references as well, but these are inconsistently applied and the writers squander the opportunity to capitalise on the thematic similarities of Dorothy trying to get home and Armitage figuring out that what she really values, even more than her fellow Thirds, is her family – Ross and Yôko.

Again, my chief complaint here is that the film both: a.) relies too much on Poly-Matrix for the emotional weight of its storytelling, and b.) fails to build on Poly-Matrix’s SFnal potentials for anything but æsthetic purposes. Dual-Matrix does recap nicely the astropolitical reasons why Martian and Earth attitudes toward robots are so divergent – Earth wants to keep Mars as a colony, and domestically-manufactured robots which can reproduce are a threat to that. But, for example: why does Oldman care that some random douchebag on Earth recognises him as Ross Sylibus? This doesn’t make sense unless you remember from Poly-Matrix that Ross and Naomi are wanted terrorists because they led an insurrection against Earth forces on Mars. It also weakens Ross’s character a bit, since the fact that his daughter is being held hostage is sufficient motivation for him to back out of supporting the bill. 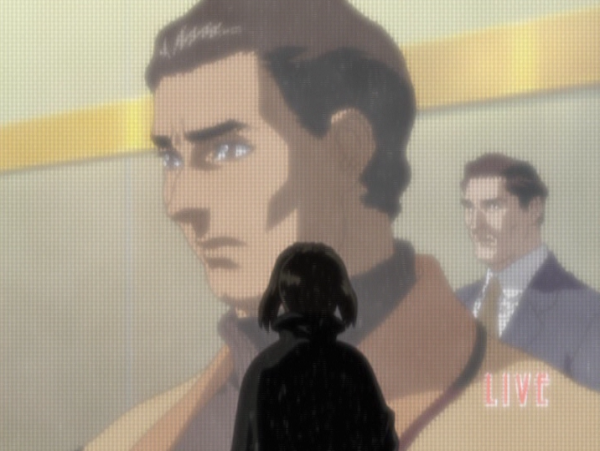 The weak characterisation sadly extends to the villains. Even though the political machinations of Maldini and his manipulation of Strings and Mouse make complete sense within the logic of the story, and even though the filmmakers tried their best to make him into a suave-and-affable white-collar villain with velvet gloves, in the end he just comes off as this petty vindictive thug rather than a criminal mastermind. In fact, Mouse actually comes off as the more intriguing – and disconcerting – villain, despite him never really outgrowing his cyberpunk stock character of the black market dealer in used robotics.

These may seem like somewhat minor gripes, but keep in mind that I’m comparing this film to the Armitage III OVA. The SFnal worldbuilding and political commentary were part of what made Armitage III great, rather than just okay. Dual-Matrix promises more of this, but ultimately fails to deliver… and so the result is just that: just okay. It’s watchable, it’s enjoyable even, and the story makes sense. But it doesn’t really capitalise on the writing choices and topical elements of the worldbuilding that made the original Armitage III OVA so disconcertingly trenchant. 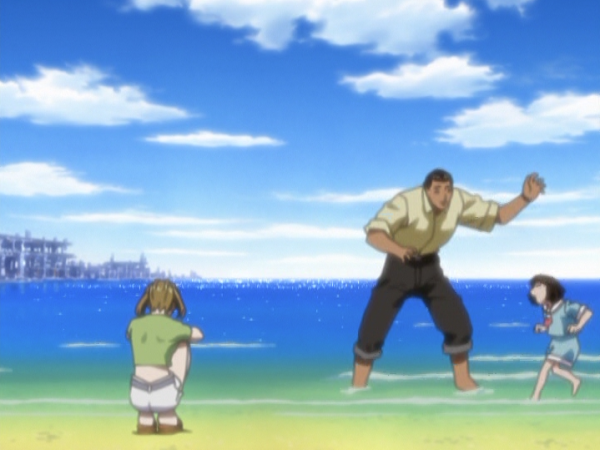