This post was originally published on The Heavy Anglo Orthodox on 8 September 2018. 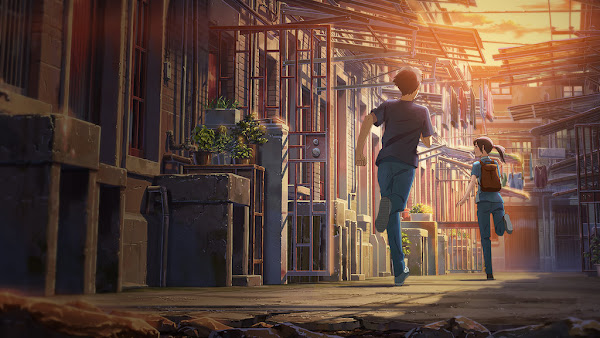 There’s a certain style of Orthodox iconography. It’s called a triptychon. They are three icons mounted together on hinges at the sides, that open in the middle. The holy images included in a triptychon are typically part of the same spiritual theme, or contribute to a larger whole: for example, a Christ Enthroned icon seated between the Mother of God and Saint John the Forerunner; or icons sequentially narrating the progression of the Crucifixion or the Resurrection. However, all the figures and all the moments are present simultaneously to the prayer before the icon. Past and futurity are eliminated. Time collapses within a diptychon or a triptychon just as sæcular time collapses within the liturgy. Moments in a diptychon, a triptychon or any other kind of sequential icon are not meant to be taken as repeated or consumed, but rather reiterated and renewed through liturgical participation or prayer.

The Chinese-Japanese animated film Flavours of Youth (《肆式青春》) came out last month, and got put on Netflix. A collaborative effort between directors Yi Xiaoxing 易小星, Takeuchi Yoshitaka 竹內良貴 and Li Haoling 李豪凌 and produced by CoMix Wave Films, Flavours of Youth consists of three animated shorts (one from each director) that fit together a bit like a triptych. Even though Chinese animation, like Chinese film generally, is traditionally structured in an operatic format, here really only one of the shorts comes anywhere close to having that operatic feel. But all three have very similar themes – like trying to grasp at fragments of meaning and reality in a hyper-real modernisation where time speeds up and leaves all merely-human things in the dust. Reassembling the human element is done here through a kind of iconography. Moments are reiterated. Time is collapsed. Sense begins to filter through only when futurity and past are liminally overridden. In the beginning of the first short, all of the main characters are sitting together in a Beijing airport waiting on a flight to Guangzhou. WARNING: SPOILERS FOLLOW BELOW. Skip the next three paragraphs to avoid them.

The first of these shorts, ‘Memories in a Bowl of Mifen’ (一碗鄉愁) doesn’t have much of a plot. It’s impressionistic. The narrator and main character Xiaoming 小明 begins in Beijing, reflecting on his childhood in Hunan Province – how he used to eat bowls of rice noodles or sanxian mifen 三鮮米粉 together with his grandmother. He reflects on the taste of the noodles, how the traditionally-prepared noodles were rich in flavour, the vegetables were fresh and liberally-spread over the bowl, and the soup had a full and satisfying body. His grandmother bought the noodles from a store with no name and no sign, run by an old local couple who ran the shop for 20 years before having to move out. Later he went to another store which served the same kind of noodles, but only so he could watch the girl he liked ride by on her bike on the way to school. There isn’t much by way of story or characterisation here, but the local details are lovingly dwelt-on and touchingly portrayed: the ingredients in the noodles, the terraced landscapes and bamboo garden fences, the zip-up nylon school uniforms, the open storefront, everything right down to the decorations on the bowls. These are juxtaposed with images from Beijing: solid slab concrete, jianbing stands and crowded subway stations. The store which serves sanxian mifen in Beijing is jarring in its unlikeness to the local mom-and-pop mifen shops in Hunan: machine-cooked noodles, big metal pots of soup, glass windows, a fast-food counter, plastic bowls and chopsticks. (Xiaoming remarks that they’re stingy with the vegetables, and he doesn’t enjoy eating rice noodles as much anymore.) Only news that his grandmother is dying recalls Xiaoming to Hunan, and after she passes on he tries to find the old sanxian mifen shop where he used to watch his senpai ride by on her bike, and the short ends with him smiling as another pair of schoolgirls ride by on bikes.

The second short, ‘A Little Fashion Show’ or ‘Neon Lights’ (霓裳浮光) has none of the impressionistic, local flavour of the first short, but what it lacks there, it makes up with a bit of psychologically-profound characterisation. It focusses instead on a well-established Guangzhou fashion diva, Yilin 依琳, who is considered to be getting a little too old by her industry, and her younger college-student sister Lulu 璐璐, who makes clothes by hand. Yilin takes Lulu into her home and supports her with her work, and Lulu is happy to look after the house and her studies in spite of her older sister’s overworking herself and neglecting her. However, Yilin’s preoccupation with scoring modelling gigs and keeping up her youthful looks (particularly when a smug young rival fresh out of high school comes along), both causes her health to deteriorate and her relationship with Lulu to suffer. We learn that Lulu chafes more than a bit under Yilin’s condescension, and that she isn’t learning to sew clothes only to make money – she really wants to be a good sister to Yilin. The ending kind of fell a bit flat for me, in that Yilin doesn’t end up having to choose between her sister and her job, and she’s kind of talked out of her problems by her manager. In the end, Yilin and Lulu come to have a professional partnership as well as a closer relationship as sisters.

But the third short is where the collection as a whole really started to shine. Somehow the iconographic conceit of the entire collection was seized upon with gusto by Li Haoling, and he put together the tear-jerker ‘Shanghai Love’ or ‘Sun After a Light Shower’ (纖雨初晴) that collapses time as it narrates, with operatic flourish, the disjointed life of real-estate developer Li Mo 李墨 and his first crush Xia Xiaoyu 夏小雨. Discovering an old cassette tape from when he and Xiaoyu were in middle school together that he didn’t remember ever playing, Mo rushes back to his grandparents’ house in a condemned old part of town so he can find a tape deck to play it in. Along the way there, he begins to remember the messages that he and Xiaoyu used to pass to each other on tape. The cassette – and the walk back toward his grandparents’ house – begin to take on additional significance as his memories of Xiaoyu return. The two of them had a fight over which high school they would try to go to. Mo stopped slacking off and started studying harder to get into Xiaoyu’s school, while Xiaoyu failed her gaokao 高考 exam (enraging her abusive father). The two of them no longer talk together (symbolically represented by Mo’s CD Walkman). Mo begins to regret that fight and everything that followed from it – as he ventures back into the neighbourhood that his firm wants to tear down, there is something of a progress of the prodigal son. The sequences run together, memory and present blur seamlessly. Mo borrows the tape player from his grandmother and learns that Xiaoyu deliberately failed her exam just to be together in the same school with him, in spite of her father. It is a poignant religious moment in a Kierkegaardian or Dostoevskian sense for Mo: a moment of repentance that spans the entirety of their relationship. The screen forms a diptychon as the teenage Xiaoyu talks into the tape recorder to a weeping adult Mo about her love for him, about the hopes and dreams she had for their life together.

There is something deeply Grantian about this collection, in that it voices certain ‘intimations of deprival’. It’s not a Jia Zhangke film by any stretch of the imagination, but the intimations are there. The hyper-real modern forces, forces of capital – symbolised by the Beijing noodle shop (or really Beijing tout court, which functions like Saint Petersburg in a Dostoevsky novel), by the Guangzhou modelling agencies that refuse Yilin on account of her age, by the real-estate firms that tear down old Shanghai neighbourhoods, even by small and ordinary things like the CD Walkman that prevents Li Mo from listening to Xiaoyu or the cellphone that Yilin ignores – are continually pressing in, and they appear to be winning in time. But there are these glimmers of hope – small moments of human connexion that rebel against the tyranny of time and the ontology of age and death.

It’s slightly unfortunate – I say slightly here because I am indeed a fan of the animation style – that the directors and the producers chose to use a hyper-modern Japanese artistic vernacular to illustrate three very modern Chinese stories. It is far too much to ask that there be a return to Havoc in Heaven-style visual conventions, which probably wouldn’t fit these stories anyway, and of course as a joint venture there is a marketing angle to consider. Netflix branded the collection as ‘From the Creators of Your Name’ – a Japanese animated film I will now have to check out. But the exquisiteness of the local details – in some places rivalling films like Studio Ghibli’s Spirited Away or From Up on Poppy Hill – seem to mark a point on the revitalisation of conventional animation currently in progress on the Chinese mainland. Flavours of Youth is definitely worth your time to go see.
Labels: 10s anime shorts books China existentialism geekdom historical interest philosophy Russia