This post was originally published to The Heavy Anglo Orthodox on 11 February 2016. 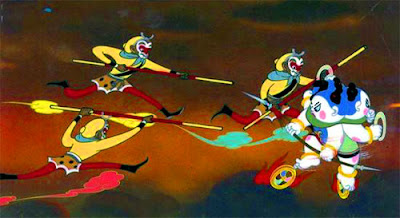 Sun Wukong and Nezha from Havoc in Heaven

This past week on WeChat, a certain Zhao Haoyang penned a lengthy essay which, using the classic Chinese 1964 animated feature Havoc in Heaven, described both the influence of Chinese animation styles on top-rated Japanese animators and manga artists, and the unfortunate loss of Chinese artistic character in recent output. His thesis centred on the use of traditional Chinese landscape painting techniques, ancient Chinese temple architecture, folk painting, Mogao-style Buddhist art, paper-cutting, opera masques, as well as operatic characterisation in Havoc in Heaven – a style Zhao Haoyang sums up as 丹青靈韻，水墨精神 (red-and-blue visual tones, the essence of water-ink painting) – and how each of these elements went on to inspire Japanese artists of the subsequent generation… before the Chinese animation style itself (exemplified in the 1999 animated remake of the same story) became a faint imitation of the other styles it inspired, became crassly-commercial and lost its own sense of uniqueness and vibrancy.

This interpretation probably shouldn’t be dismissed out of hand. The great masters of the Japanese style of animation were, after all, all committed leftists. Tezuka Osamu was consistently, stridently anti-war, and even flirted at times with the Japan Communist Party. Takahata Isao is well known for the anti-war themes of his movies as well, and has recently been an outspoken critic of revisions to Article 9. Miyazaki Hayao, of course, began his career as a Marxist, and ended up espousing a form of distributism or – in his own words – a ‘local production for local consumption’ form of ‘democratic socialism’, and likewise recently found himself deploring the Abe administration’s belligerence toward China in particular. This pro-China slant among the Japanese left should come as no surprise to those who have studied the history. There is, in fact, a strong and long-standing Sinophile streak in Japanese leftism that is in no way averse or hostile to healthy expressions of tradition, particularly in the visual arts and material culture.

It is very well-known by now, how Miyazaki himself was drawn toward becoming an animator after seeing the Japanese animated version of the Chinese Tale of the White Serpent, which was storyboarded and produced by Hiroshi Ōkawa to ‘strike a tone of reconciliation’, particularly with China, in the wake of the Second World War. But Miyazaki’s own Sinophilia comes off rather indirectly in his own films. The ‘red and blue visual tones’ of the Chinese school (and particularly Havoc in Heaven) find a minor, subtly feminist echo in Miyazaki’s films, which are drawn to an environmental palette of deep blues and greens drawn in contrast with the colourful, red or pink clothing of the female protagonist (even if it’s something as simple as a red bow), or who may have a bright complexion or bright red hair. His fantastic landscapes, which may or may not be literally shrouded in mist (see Mononoke-hime), may also invite comparisons with Chinese watercolour paintings. Whereas in Ponyo Western critics were very quick to note the Wagnerian influences in the story and in the score, the Chinese-operatic influences also showed through particularly in Miyazaki-sensei’s characterisation in his earlier work. Spirited Away in particular uses a Taiwanese villagescape as direct inspiration for the fantastic, dreamlike setting, and I know I’m not the first person to notice the striking similarities between the visual characterisation of Kaonashi and Chinese opera face-paint.

We have a direct attestation in Zhao Haoyang’s essay of Tezuka Osamu’s love for the 1964 version of Havoc in Heaven: a sketch by the great artist showing Astro Boy shaking hands with Sun Wukong. In fact, though, Tezuka himself did a version of Journey to the West four years before Havoc in Heaven came out (though, naturally, the most famous animated iteration of Journey to the West, at least here in the United States, remains Toriyama Akira’s Dragon Ball). But returning to Tezuka, he treated the entire enterprise of animation as though it were an operatic stage production or an early Hollywood studio – his Star System reused the same animated ‘actors’, though in different roles in different productions. The features of Tezuka’s Star System character designs deliberately reflect Western animation conventions of the time – think Disney and Warner Bros. in particular – but Tezuka’s vibrant animation and visual design can also be seen to reflect the bombast, the exaggerated mannerisms, the instant impressions of a character’s visual appearance, which are so prominent in jingju and kunqu.

I highlight all this, not at all to belittle Japanese visual or dramatic culture in any way, or to posit it as subservient or dependent on its Chinese antecedents. Indeed, it’s a tribute to these artists that they took their influences and ran with them in unique directions. But it does point, both to China’s vast untapped potential in terms of its much sought-after ‘soft power’, and to an impoverishment in the modern turn that prevents that potential from being realised. The Japanese greats, who were also great Sinophiles, voiced great disappointment and disillusionment over China’s lapse in the character of its visual arts.

As for me, I’m looking forward to watching Havoc in Heaven now. 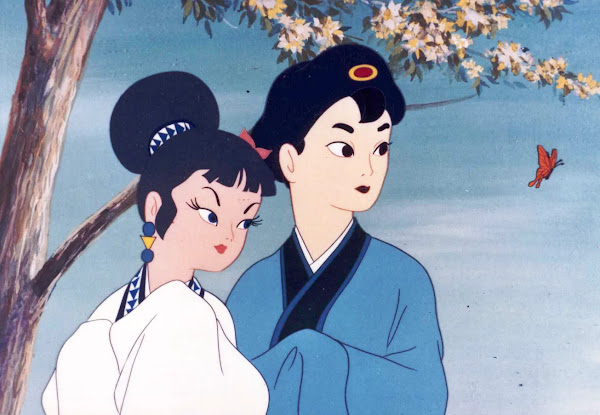