This post was originally published to The Heavy Anglo Orthodox on 2 December 2015. 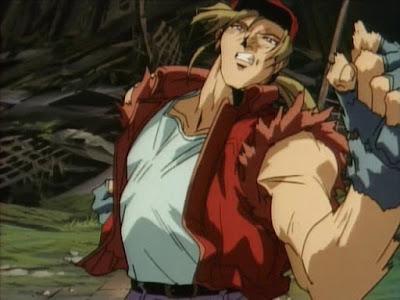 There are two excellent reasons to watch the animated miniseries Garō Densetsu 餓狼傳說, or Fatal Fury as we call it in English… and no, I’m not talking about those two reasons, gentle readers. Though one might want to dismiss it as a simple-minded fighting-and-fanservice OVA, there are two very clear aspects which mark it off as having a distinctly Confucian flavour. The first is the importance of the five fundamental relationships in Terry Bogard’s life, which manages to blend over into a meditation on the relation between the martial virtues and filial piety; the second is an implicit discourse on vengeance and fate, which lends the adventure a possibly-unintended political dimension.

The first one is perhaps easier to discuss. Terry and Andy Bogard are the students of Tang Hulu shifu (yes, a clear reference to tanghulu), the last living master of the near-lost Baji Shengquan 八極聖拳 school of Chinese martial arts. Their foster-father Jeff, also a student of Master Tang, belonged to the senior generation of Baji Shengquan; however, as Terry and Andy looked on helplessly, Jeff was murdered by his fellow-student and rival, Geese Howard. In order for the school to continue on, and in order to avenge Jeff Bogard’s death, Master Tang agrees to teach the final technique of the Baji Shengquan school to one of his two students after ten additional years of training, after which they will meet each other by Jeff’s grave.

Ten years pass, and Terry returns to his hometown to fulfil his obligations to his shifu and to his brother, to learn the final technique of his school and avenge his father’s death. He stumbles into a nightclub where he meets a young lady, Lilly McGuire – and is challenged by Joe Higashi, whom he later befriends. He meets up with Andy and his master when he goes to visit his father’s grave, and the two brothers decide to enter the King of Fighters tournament, organised by Geese Howard himself, to decide who will win the right to learn the last Baji Shengquan technique and face Geese personally. In the meanwhile, Terry meets Lilly in the street, giving food and money to some homeless children, and promises her that he will free her from her predicament – as he can tell that she is under an obligation to Geese.

However, Geese has arranged a trap for Terry, Andy and Tang at the King of Fighters tournament, and plans to have them all killed when they fight. However, he is foiled by Joe and Lilly; though Joe, Terry and Andy manage to escape, Geese kills Lilly and has Billy Kane inflict a mortal wound on Master Tang. As she is dying, Lilly tells Terry that she had helped Geese kill his father, but Terry, having seen the incident and remembered the little girl who had accompanied Geese, had known all along and still loved her. After bringing Tang shifu to the hospital, Andy immediately goes back for revenge, accompanied by Joe; however, Terry stays behind. Tang then awakens and teaches Terry the Baji Shengquan’s ultimate technique – not because he is stronger, but because his character has been better-developed than Andy’s has. Joe had remarked when watching the two brothers fight that Andy fought like a hungry wolf, but Terry stood firm like a sapling with deep roots, able to bend and withstand the wind. The final technique in the Baji Shengquan, in fact, draws power from the earth – but the interesting thing about it is that the ‘earth’ is visually represented both by the physical earth and by Terry’s relationships with Jeff, Tang shifu, and Lilly.

It is intimated that Terry’s martial ability depends very strongly on his filial piety, and on his correct keeping of the five relationships: his reverence for Master Tang, his admiration for his father Jeff and his desire to avenge his death in the proper way, his care for his younger brother Andy, his intense but ill-fated love for Lilly and his mutually-strengthening friendship with Joe. As it turns out, Andy and Joe are not capable of defeating Geese by themselves; only Terry can do so – and as it turns out, he can only defeat Geese by properly remembering the five people to whom he is accountable, and by knowing his proper place with regard to heaven and earth.

One can expect, in the tradition of martial-arts films, books and comics, that most of them would uphold some form of Confucian-inspired honour code, given the indebtedness so many Japanese artists and storytellers in this particular oeuvre have to Romance of the Three Kingdoms and Water Margin, along with later works like those of Jin Yong. Indeed, the Confucian roots of the shōnen comic culture have not been overlooked by their English-language fans. I just hadn’t been expecting the Confucian overtones of a work like Fatal Fury to be quite so in-your-face. I had been half-expecting one of the brothers to quote directly from the Book of Rites: 「 父之讎，弗與共戴天。」 ‘With the enemy who has slain his father, one should not live under the same heaven.’ Certainly the principle is endorsed by Andy and Terry.

If anything, in the sequel, Fatal Fury 2: The New Battle those overtones are even stronger. In this story, Terry faces Wolfgang Krauser, Geese Howard’s half-brother and an immensely-powerful martial artist who makes his living as a bodyguard for Europe’s nobility. At once, the audience is confronted with both the similarity and the distinction between the two fighters. Terry fought to avenge his family and his master; Krauser fights, it is intimated, only to seek amusement – even though his own brother has been crippled by Terry. Terry cares deeply for Andy, who in turn respects and honours his older brother; by contrast, Krauser treats Geese with contempt, and Geese is frightened of Krauser but has no affection for him. Clearly when we meet Krauser for the first time, we are meant to regard him as something of an equal, a counterpart to Terry. He is strong enough in their first encounter to beat Terry senseless.

At the same time, Andy’s jūdō master Yamada Jūbei remarks that Krauser is a monster – because he murdered his own father. There are very few crimes in the Confucian canon for which the Master directly prescribes the death penalty, but two of them – the most serious – are regicide and parricide. Indeed, as the Book of Rites has it, in the words of Duke Ding of Zhu-Lou:

The revelation that Wolfgang Krauser is a parricide is the single aspect of his character that serves to distinguish him as a foil for Terry; in nearly all other respects they are shown to be equivalent, in ability and even (in a strange way) motivation. They both actively seek out fights. When they fight, they match each other blow-for-blow. They understand each other’s techniques. It is heavily implied that the only reason Terry is able to win against Krauser, is because he is still being guided by the people in his life who are most important to him. It takes an upbraiding by Joe to snap him out of his funk after losing to Krauser the first time; it takes a visitation by the spirits of Lilly and Master Tang to convince him that he is capable of defeating Krauser; and it takes fighting with Andy for Terry to realise the technique of the ‘Power Geyser’. Krauser, on the other hand, only thinks about his father once every year, and at that only to gloat over how powerful he has become.

All of this is underscored by the fact that witnessing everything Terry does is a young boy, Tony, who hero-worships Terry and wants to be just like him. However, Tony’s father died in a fight, and his mother doesn’t want to see her son go the same way. Terry continually tells Tony to go home and look after his mother… yet Tony continues to follow him, even accompanying him to Krauser’s mansion. Tony sees first-hand the equal abilities of Terry and Krauser, and in the end is witness to Krauser’s suicide after his shameful defeat. It is only after Terry makes his point clear to his young worshipper that his way of life isn’t for him, that Tony goes back and agrees to look after his mother. There is a moralistic, even heavy-handed aspect to this part of the story that serves to make the foregoing Confucian virtue-ethical points with the cinematic equivalent of a sledgehammer.

It is worth noting again that the entire genre of martial-arts anime is heavily dependent on the fictional devices used in wuxia 武侠 fiction, including Romance of the Three Kingdoms and Water Margin, and its youxia 游侠 poetic antecedents. The itinerant lives of the fighters in Fatal Fury and the extralegal honour and vengeance codes they uphold can be traced in their pedigree back to the literary jianghu 江湖, the subculture of martial artists, itinerant monks, dissenting scholars, beggars, outlaws, hucksters and unsavoury characters of all sorts which made up the background for much of this variety of fiction.

Which brings us to the second point of interest about the Fatal Fury series, which is that it treads on a certain idea of familial obligation and the duty of vengeance which are common to the Confucian tradition, and particularly to Gongyang scholarship, which has been historically used to argue for legal leniency and conciliatory justice in certain cases of banditry and members of poor and ill-connected clans taking the law into their own hands. That idea is on full display here; Geese Howard is seen to have the police firmly bought and paid for, and even tries to use them to kill Terry and Andy. The law is not a recourse, not for characters like Lilly or Tony. It may not be too fruitful or useful to read much into this: from a literary perspective, this simply serves to heighten the tension and highlight the danger Terry, Andy and Joe have placed themselves in at the King of Fighters tournament. Certainly the message, insofar as there is one, is primarily moralistic rather than political. But I do have to wonder if there isn’t something else behind it.