This post was originally published to The Heavy Anglo Orthodox on 23 October 2014. Several of my opinions expressed herein have changed considerably since that time; I know my language has improved a bit. I am quite a bit more comfortable now owning my attachment to certain elements in Japanese culture. I also tend to take a bit more forgiving stance on at least some level of pretentiousness and some level of commercialism. Although I fancy that six years or so may have mellowed my own judgementalism a bit, many of the anime here that I said I couldn’t stand I still can’t. But coming to the point: I really should go back and rewatch Black Lagoon (it is certainly worth it), and try to make a bit more sense of its commentary on Russia, particularly with the character of Balalaika; I feel like I would be better able to contextualise it now. Revy still holds massive appeal for me. 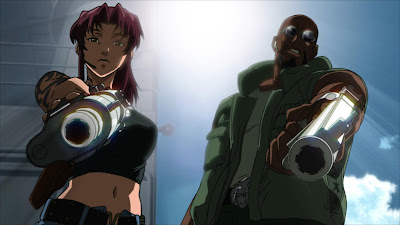 I really can’t say I’m as much of a weeaboo as I used to be. Politically I’m not a Japanophile at all. Actually living and working in East Asia – China and Japan – cured me of that. And going to college pretty much turned me off from most Japanese cultural exports. There’s a plasticity and sterility to them which, to tell the truth, kind of rubs me the wrong way. Nowadays I mentally sort Japanese anime and manga into four broad categories:
Which leaves me with the question of what to do with Black Lagoon, which I just recently watched. After having watched it, I still can’t decide if what I watched fell into the category of art, pretentious poseurish bullshit, or maybe a new category – self-aware pretentious poseurish bullshit.

What it is is remarkably entertaining and darkly funny. If Quentin Tarantino (complete with his brand of vaguely left-wing politics) directed Pirates of the Caribbean set in modern-day Southeast Asia, with an artistic style that is clearly trying to ape Cowboy Bebop, the result would look very similar to this. And one of the main characters is a chain-smoking, hard-drinking, blue-streaking, dual Beretta-wielding, hotpants-rocking tattooed Chinese-American badass raised on the wrong side of Manhattan. How badass, you say? Put it this way: anytime she opens her mouth or twitches her finger she can roundhouse kick Chuck Norris before shooting him in the damn face. 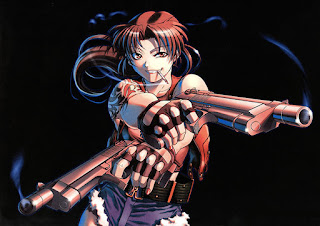 Citizen of the fucking year.
The series can’t avoid being political, though I’m not decided yet whether it’s a good thing or not. And because of its following the main character Rock, who as a low-ranking young Japanese salaryman is a minnow thrown into the shark pool that is Tortuga the fictional Thai port town Roanapur, its politics come off at first as vaguely quasi-anarchist. He gets kidnapped by pirates and his bosses essentially try to get him killed in order to prevent the pirates from completing their contract, but after he learns of and then foils their plan, disillusioned with the Japanese corporate world he turns pirate himself.

And, not to give away spoilers, but the ranking superpower on the world stage often makes its weight felt in this series. When the main characters aren’t Tarantino-ing neo-Nazis in the style of Inglourious Basterds, that is. Or getting into fights with unstoppable Colombian ex-mercenaries, busting the heads of Philippine Islamists, protecting a one-woman international counterfeiting ring from Cuban-American Mafiosi or abetting the massacre of entire yakuza clans by ex-Soviet gangsters. It’s a real mixed bag that way.

Where it gets into the pretentious bullshit territory, though, is when Rock ends up in a sort of pointless existential crisis on account of a sympathetic Heidegger- and Sartre-quoting villain-of-the-arc. Philosophically it is literate (unlike so many of Eva’s countless imitators) and it makes sense both for him and for the villain, but in terms of the story I’m not entirely sure it tells us anything we didn’t already know about Rock – and it certainly doesn’t resolve anything. (Though maybe that’s the point. Argh.)

I’m not undecided on the quality of this series. It is remarkably well-made. Gratuitous? Gleefully so. But even the gratuitousness has a point to make. And the characters really do grow on you, even the ones who would be the most unlikeable in real life, and that’s all to Rei Hiroe’s credit. The artwork is pretty derivative, but the story is better than decent! I’m giving it my recommendation.
Labels: 00s anime series China fanservice geekdom philosophy political commentary Russia Southeast Asia