This post was originally published to The Heavy Anglo Orthodox on 11 August 2009.

By way of explanation: these retrospectives from The Heavy Anglo Orthodox are meant to provide some grounding and context for this new Paneurasian Weeb blog, not necessarily to dictate its direction. In fact, the rather unpredictable breadth of this forthcoming series of nine retrospectives gives plenty of room to manœuvre, so to speak. We shall see whither it leads and if that is a productive direction. 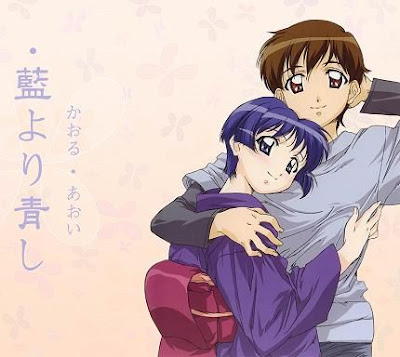 A quick caveat to the reader: this post contains MAJOR SPOILERS for the manga series Ai Yori Aoshi by Fumizuki Kou.

Perhaps it's a purely aesthetic guilty pleasure on my part that I enjoy the occasional romantic comedy; Ai Yori Aoshi 《蓝より青し》, on the surface of it, appears to be no exception. However, more than being your typical seinen manga 青年漫画 in which the primary focus is on the pulchritude of bodacious young women, Ai Yori Aoshi goes much deeper. The very title is an allusion to the philosophy of Xunzi 荀子: 青出于蓝而胜于蓝 (‘blue dye comes out of indigo, yet is deeper than indigo’), though the conceits of the series are a deep critique of Japanese culture drawing more on existential modes of thinking than Confucian ones. The main character, Sakuraba Aoi 樱庭葵, is criticised pretty heavily in some quarters for being essentially a doormat, upholding traditional Japanese gender roles. It is a criticism that needs to be made, but ultimately I think the feminist-ethical position might be wiser to see within her character an ally in the ethical and religious critique of traditional Japanese culture's expectations of women in society.

Through the eyes of a college sophomore, Hanabishi Kaworu 花菱薫, we meet a young woman, Aoi, who has run away from home to look for a friend she hasn't seen in eighteen years. She was betrothed to him from the age of four, and has worked her whole life ever since to become his wife, only to be told at the age of twenty by her family that her engagement to him had been annulled and that she should forget all about him. And it turns out that her fiancee was Hanabishi Kaworu all along – who ran away from home himself after disowning his family.

Already we can see the tensions on poor Aoi. The ethicist must reproach her family in the severest terms for treating her as they did, bringing her up to be so docile, submissive and frail (as her own mother describes her!), dependent completely upon another for her self-worth. A deep crime indeed, throughout her childhood to cast her into such a rigid shape, and then suddenly and cruelly turn around and tell her that that existence has been an utter mistake! We can see that it would be all too easy for Aoi to become embittered and resentful at her family, to rattle the chains of her own docility against them and do everything within her power to remind them of their mistake, making them miserable. But instead, she takes her fate into her own hands and runs away to meet her intended, Kaworu, staking everything that has been left to her on the utterly absurd hope that Kaworu will accept her as wife, not having seen or heard from her for eighteen years.

All this for a marriage arrangement undertaken for the basest of aesthetic reasons: a couple of petty, vulgar shopkeepers selling their offspring to each other, to merge the Hanabishi Zaibatsu with the Sakuraba-Gofuku Corporation for profit! I cannot help but pity the children born to such families, whose self-worth is always secondary to their families' greed! In Kaworu's case we can taste the bitterness of rejection, we can be deafened by the thundering voice of the ethical in his disdain for his family, who cast out his mother, drove her to her death and tried to beat the memory of her out of her son. Thankfully it has led him to reject in himself everything the Hanabishis were to him: as cruel as they were to him, he reaches out in equal kindness to everyone around him. Until Aoi meets him, we may well imagine within Kaworu this daemonic urge, forging his outward kindness in a roaring fire of hatred at everything connected with his father's family, burning him from within. The scars on his back may have been inflicted by his grandfather, but the deeper scars are the ones he inflicts on himself, on his grandfather's account. It is left to the genuine affection Aoi shows him to heal him, and turn his kindness into something authentically his own.

In Aoi's case, though, her parents are of no such concern, for in their schemes and petty machinations they have unknowingly brewed a storm which stretches far beyond their narrow horizons – in a twist on Xunzi's observation, the dye with which they have sought to colour her runs far deeper and far truer than its source! Aoi is a much stronger character than Kaworu, because her understanding is so much greater – she invests the task set before her with a deep, religious passion, all based on a single memory of the kind, tortured boy she met once in her childhood. We find in her every movement, her every action, the deep self-knowledge of a knight of faith, that I am Aoi – and I know I am Aoi, because I love Kaworu. Does it matter to her whether he returns her love? Ultimately, no – she is too strong to be dependent on him in such a way. She hasn't seen him in eighteen years; how can it possibly matter to her what he has felt and done in her absence? But she runs away from her family to see him anyway, all on the strength of a single childhood memory and a single impossible hope.

Perhaps I am giving Fumizuki-sensei too much credit. There is a level at which more must not be made of Ai Yori Aoshi than it actually is. It is a romantic comedy – the sensibility to which it appeals most basically is the aesthetic desire for the happy ending, and it does so in ways that are comically blatant. And yes, there is a shallow, misogynist, present-age level at which it is a harem manga about cute young girls with sexy bodies. (After all, fanservice is fanservice is fanservice. This perception is not exactly helped by the fan community, who ended up voting for Aoi as Newtype Magazine's sexiest anime heroine in 2002.) But to stop here is to stop with the aesthetic and miss the deeper themes. We do have a voice of the aesthetic in Kaworu's heavy-drinking American friend-who-wants-to-be-more-than-a-friend Tina Foster, though it turns out that within that existence she harbours a deep and painful despair made plain later in the series. We have also a steady voice of traditional Japanese ethics in Aoi's tutor Kagurazaki Miyabi 神乐崎雅, whose job in the series seems primarily to appeal to Aoi's sense of family honour and to Kaworu's sense of kindness and decency – she does later show a religious side, however, when, upon comprehending the sheer sincerity of Aoi's affection for Kaworu, she swears to the impossible task of defending Kaworu and Aoi from the disapproving Sakuraba family regardless of the cost to her standing with the Sakuraba or her ethical qualms about the match.

AYA (the anime as well as the manga) has also been criticised for being dissociative, haphazardly borrowing tropes from rom-coms and from the 'harem' genre without doing either particularly well. On the contrary, I'm inclined to give Fumizuki-sensei the benefit of the doubt, that he knew exactly what he was doing. AYA is very much what you make of it, and your reaction to it says more about you than it does about the series: you can identify with Tina Foster and react to it in a purely aesthetic way, as Newtype Magazine readers did; you can identify with Hanabishi Kaworu and reject it ethically for its portrayal of traditional gender roles; or you can identify with Sakuraba Aoi and appreciate its religious critiques of the society it portrays.

The series does indeed make some deep and scathing criticisms of the traditional Japanese culture of conformity and group mentality at the ethical level. Ethically, we see that poor Aoi's freedom has been compromised from the beginning by the expectations her family has laid upon her: Miyabi informs her in stentorian tones of her duties to the Sakuraba family, which Aoi comes to see as an unbearable burden. But the criticism goes deeper: when it comes down to choosing between her normative obligations as a daughter of Sakuraba and her chosen individual identity as Kaworu's lover, we can feel her anxiety as she makes the decision to cut off her family, sacrificing everything for the chance to remain with Kaworu. This is a markedly existentialist critique. (Ultimately, I think Aoi is a feminist in the fullest way that is open to her – she ends up showing autonomy and taking full responsibility for her decisions, regardless of how shaped they may have been by her incredibly problematic upbringing.)

I was surprised by the presence of existentialist themes in AYA, to be honest, though existentialism does seem to feature prominently in many Japanese cartoons and graphic novels. Kanzaka Hajime's 神坂一 high-fantasy series Slayers NEXT features a teleological suspension of the ethical at its climax when Lina Inverse is faced with the decision to save Gourry Gabriev's life at the risk of destroying the world with a forbidden spell. Sen and Haku in Miyazaki Hayao's 宫崎骏 film Sen to Chihiro no Kamikakushi 《千と千寻の神隐し》 must each deal with identity crises (even losing and forgetting their own names!) in a world rife with nightmarish absurdity, and eventually recover their senses of purpose through self-sacrificial love for each other. And (of course) all of the characters in Anno Hideaki's 庵野秀明 Neon Genesis Evangelion are drenched in existential despair in the face of a meaningless universe. Other examples abound: Ghost in the Shell, Cowboy Bebop, Haibane Renmei 《灰羽连盟》. I marvel at how a culture which places such painstaking emphasis on traditional norms, conformity, family identity and nationalism can produce such a fascination in its popular artwork with the individualistic subjectivism of Sartre, Camus, Nietzsche, Dostoevsky and Kierkegaard – though perhaps it is simply a reaction on the part of the artists who find themselves on the periphery of the culture. Perhaps, as the alienated loners within this vast cultural system they come to identify strongly with this style of thinking, and use it to protest and resist the conservative patriarchal and conformist norms of the society around them.
Labels: 90s anime series existentialism fanservice Japan manga philosophy